When an Attacker Is Muslim, Mental Health Questions Rarely Seem To Get Raised Following the tragic terror attack in Lower Manhattan on Tuesday, the news media has focused on various characteristics of suspect Sayfullo Habibullaevic Saipov.

The media’s gaze has landed on his country of origin, Uzbekistan; the fact he came to the United States on a “diversity visa”; a note in his car referencing allegiance to the Islamic State; and his interest in public displays of religious devotion, which were said not to be matched by his own religious training or curiosity.

On Fox News, retired Green Beret Michael Waltz, who owns a defense contractor operating in Kabul, even used the incident as proof of the need to go “on the offense” in Afghanistan — a country that is not, in fact, Uzbekistan.

This Fox "expert" who's talking about "going on the offense" against terror in Afghanistan...owns a defense contractor working in....Kabul pic.twitter.com/MyF9X9lzlR

But what isn’t being asked by most commentators is the question that pops up after so many other mass shootings and killings: What about his mental health?

Of course, the question of a shooter’s mental health is itself a sensitive matter, and loose speculation is unhelpful. But it’s notable that if a shooter is Muslim, the question seems less likely to be asked at all — even if the attacker, in this case, emerges from a truck waving a BB gun and paintball gun, an act that displays a dubious tethering to reality.

For Stephen Paddock, who shot dead 58 people and injured hundreds of others in Las Vegas, the focus quickly moved to his mental health. Media interviews with his girlfriend probed the fact that he exhibited strange behaviors, such as lying in bed at night and moaning and screaming. Medical analysts debated in op-eds whether his mental health played a role. Investigators eventually came to the conclusion that Paddock had an undiagnosed mental health condition.

James Alex Fields Jr., who slammed his car into antiracist protesters in Charlottesville, Virginia, also had his mental health examined. One of his teachers described to the media how he had been taking antipsychotic medications.

Unsealed court documents from the self-proclaimed white supremacist Dylann Roof’s case caught the media’s eye when they revealed that a local forensic psychiatrist found that he showed signs of various disorders, including schizoid personality disorder and depression.

Jared Lee Loughner, who shot former Rep. Gabby Giffords, was used as an example of a mentally ill person who did not get help in time. A lengthy TIME article quoted a Harvard psychiatrist who said the Laughner case was an example of the “obvious need for more capacity in the mental-health system.”

Fields, Paddock, Roof, and Loughner all share a quality that Saipov doesn’t — they’re not Muslim, and they’re white.

Humanizing attackers in this way, even as their crimes are reviled, has been a cornerstone of criminal justice for generations. The field of criminal psychology was developed in the 20th century with the intent of understanding what makes criminals into the people they are so that police can predict and track crimes, and social policymakers can prevent them.

Sometimes the mental health of Muslim shooters does come under scrutiny. When Omar Mateen rampaged through the Pulse nightclub in Orlando, discussion focused on whether he was tortured over his sexuality, with his wife calling his stability into question. 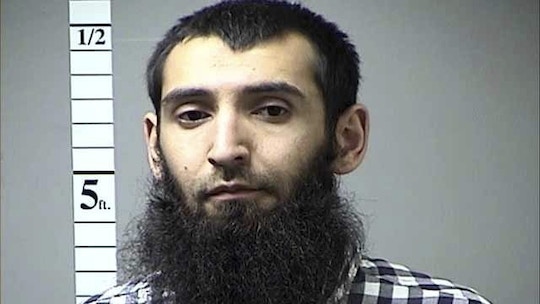 This photo provided by the St. Charles County Department of Corrections in St. Charles, Mo., via KMOV shows Sayfullo Saipov.

If Muslim terrorists were routinely subjected to this sort of examination in popular media,  it might help increase public understanding of the dynamics that fuel terrorism.

In 2009, researchers studied a group of Palestinian suicide terrorists, comparing them to a control group of non-suicide terrorists and organizers. They found a significantly higher prevalence of various mental health disorders — ranging from depressive characteristics to low ego and other suicidal tendencies — among the suicide terrorists. In 2014, another researcher reviewed the literature on the topic of suicide terrorists and found that there’s persuasive evidence that suicidality was present in a number of terrorist attackers. In other words, ideology alone was often not enough to persuade a terrorist to take the further step of killing themselves through a violent attack.

Terrorism, like any other violent crime, scares people for understandable reasons. But a rational examination of the lives of the individuals who engage in these criminal acts can allow us the insight that could help prevent them — whatever the criminal’s race or religion.

Update: We ran into Arizona Republican congressman Trent Franks on Wednesday and asked him about the mental health double standard. Franks, a hardline right-winger who often targets Muslims with over the top rhetoric,  conceded that it’s a legitimate issue. “Well I think we always, I think we always consider someone’s mental health in a situation like this,” he said. But he quickly pivoted to his talking points. “But it is a telling thing that so much of the terrorist ideology here has its genesis in radical Islam,” he said.

Top photo: Security forces cordon off the area after a man drove a pick up truck along a bike lane near the West Side Highway, killing at least eight people and injuring others in New York on Oct. 31, 2017.