We published some 1,400 stories in 2017, shining a light on abuses and corruption from Washington, D.C., to the foreign battlefields of the war on terror. War crimes, government spying, climate chaos, white nationalism in the White House — if 2017 brought unwelcome developments in the world, it gave The Intercept plenty to write about with urgency and outrage. We published some 1,400 stories this year, shining a light on abuses and corruption from Washington, D.C., to the foreign battlefields of the war on terror. Here are 20 stories that are worth revisiting — or catching up on, if you missed them — as this year full of bizarre and bad news hurtles to a fitting conclusion. The FBI spent almost a year making a fake documentary, trying to get Nevada rancher Cliven Bundy and his supporters to incriminate themselves on tape.
By Ryan Devereaux, Trevor Aaronson

The Crimes of Seal Team 6 Illustration: Attila Futaki for The Intercept

Behind the heroic narratives of SEAL Team 6 is a darker, more troubling story of criminal brutality and war crimes.
By Matthew Cole The Trump administration says its January 29 raid in Yemen was a huge success. But eyewitness accounts contradict the White House’s version of events.
By Iona Craig Exclusive: Mike Pompeo met with William Binney, who claims the DNC email theft was an inside job, not a Russian hack, at President Donald Trump’s request.
By Duncan Campbell, James Risen

The Worst of Donald Trump’s Toxic Agenda Is Lying In Wait — a Major U.S. Crisis Will Unleash It While we are distracted by (or addicted to) the Donald Trump Show, the quiet, methodical work of redistributing wealth upward proceeds apace.
By Naomi Klein Donald Trump and other Republicans decry Islamist terror attacks but pay scant attention to attacks by white nationalists, such as in Portland.
By Mehdi Hasan Stephen Paddock, the white man who carried out the Las Vegas mass shooting, is primarily described as a “lone wolf” — not a “terrorist.”
By Shaun King

Donald Trump and the Coming Fall of American Empire Illustration: Elise Swain for The Intercept

Famed historian Alfred McCoy predicts that China is set to surpass the influence of the U.S. globally, both militarily and economically, by the year 2030.
By Jeremy Scahill

Barry Jones Was Sent to Death Row for the Murder of a 4-Year-Old Girl. Did Arizona Get It Wrong? Barry Jones has spent 22 years on death row. Prosecutors have fought against reopening his case even as the basis for his conviction has fallen apart.
By Liliana Segura Bureau policies have been crafted to take into account the active presence of domestic extremists in U.S. law enforcement.
By Alice Speri 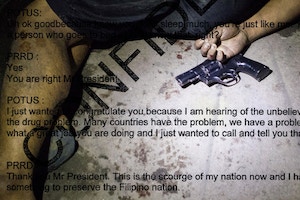 “Keep up the good work,” Trump told Duterte, according to an official transcript of the April 29 call. “You are doing an amazing job.”
By Jeremy Scahill, Alex Emmons, Ryan Grim

The Sordid Double Life of Washington’s Most Powerful Ambassador Yousef al-Otaiba, the UAE’s powerful ambassador to Washington, led a hard-partying life that eventually collided with his professional world.
By Ryan Grim In the Liberty City Seven terror case, a group of street hustlers working a scam fell victim to an FBI informant posing as an agent of Al Qaeda.
By Trevor Aaronson Prison rape is a national epidemic, but it’s bound to get left out of the national conversation sparked by allegations against Harvey Weinstein and others.
By Natasha Lennard

Japan Made Secret Deals With the NSA That Expanded Global Surveillance 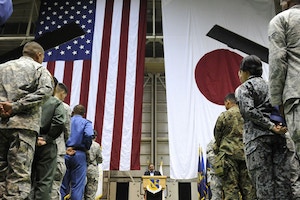 Top-secret documents reveal the complex relationship the NSA has maintained with Japan over a period of more than six decades.
By Ryan Gallagher By going after animal rights activists, the U.S. government attempts to cover up systemic abuse at the heart of factory farms.
By Glenn Greenwald 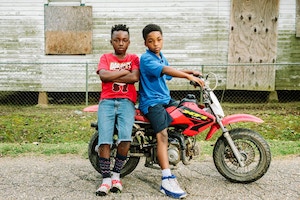 For the people living next to the neoprene plant in St. John the Baptist Parish, the risk of cancer from air pollution is 800 times the national average.
By Sharon Lerner Illustration: Min Liu for The Intercept

New York City jails are prohibited from strip-searching or cavity-searching visitors. Yet dozens of women say guards have subjected them to such procedures.
By Raven Rakia
Wait! Before you go on about your day, ask yourself: How likely is it that the story you just read would have been produced by a different news outlet if The Intercept hadn’t done it? Consider what the world of media would look like without The Intercept. Who would hold party elites accountable to the values they proclaim to have? How many covert wars, miscarriages of justice, and dystopian technologies would remain hidden if our reporters weren’t on the beat? The kind of reporting we do is essential to democracy, but it is not easy, cheap, or profitable. The Intercept is an independent nonprofit news outlet. We don’t have ads, so we depend on our members — 35,000 and counting — to help us hold the powerful to account. Joining is simple and doesn’t need to cost a lot: You can become a sustaining member for as little as $3 or $5 a month. That’s all it takes to support the journalism you rely on.Become a Member