Trump told Bahrain’s ruler there wouldn’t be any strains between them. Soon after, human rights abuses escalated in the Persian Gulf nation. 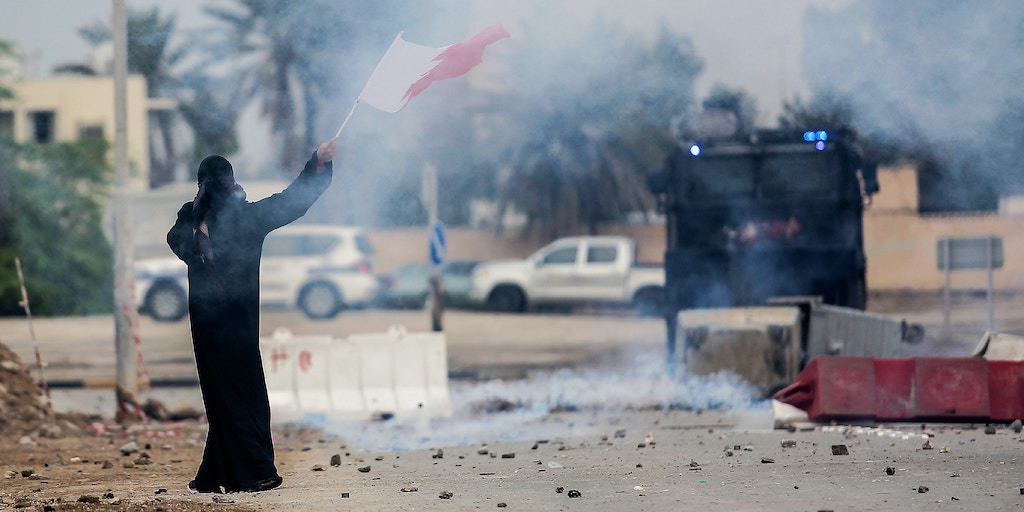 Clashes in Bahrain on March 25, 2017, after the death of a young Bahraini man who was shot outside the home of the country’s top Shi’ite Muslim cleric.

Donald Trump’s words are no laughing matter. They get people in faraway countries tortured, raped, and killed.

Consider the case of Bahrain, home not just to the U.S. Navy’s 5th Fleet, but also to what has been dubbed the “forgotten revolution” of the Arab Spring. For more than seven years now, security forces in the tiny Gulf island kingdom have been shooting, maiming, blinding, and detaining pro-democracy protesters in their hundreds and thousands. An independent inquiry commissioned by the Bahraini government at the start of the uprising confirmed the use of “excessive” and “indiscriminate” use of force, not to mention the systematic use of torture.

To be clear, the Obama administration did shamefully little to stop the violence in Bahrain. Nevertheless, as president, Barack Obama at least went through the motions of condemning “mass arrests and brute force” and even imposed a handful of restrictions on U.S. arms sales to the kingdom.

Under Trump, however, even those few restrictions have been lifted — and the rhetoric transformed. “Our countries have a wonderful relationship together, but there has been a little strain. But there won’t be strain with this administration,” the new U.S. president proclaimed a year ago, during a meeting with Bahrain’s king, Sheikh Hamad bin Isa Al Khalifa, at a summit in Riyadh, Saudi Arabia.

Less than 48 hours later, on May 23, 2017, Bahraini security forces raided the village of Diraz and opened fire at a sit-in by supporters of the Sunni-ruled kingdom’s most high-profile Shia cleric. Five people were killed, including a respected environmental activist, more than 100 were wounded, and 286 were arrested. It was the deadliest attack on Bahraini protesters since the start of the revolt in 2011 — and it was done with the blessing of the president of the United States.

“The timing of this operation – two days after King Hamad’s convivial meeting with President Donald Trump – can hardly be a coincidence,” observed Nicholas McGeehan, then a senior Bahrain researcher at Human Rights Watch, last May.

But Al Khalifa hasn’t been the only Arab autocrat to receive a rhetorical blank check from the U.S. president. Take Egypt. Trump hailed President Abdel Fattah el-Sisi as a “fantastic guy” and, only hours after his meeting with the Bahraini king, was photographed touching a glowing orb with the Egyptian strongman at the opening of an anti-extremism center in Riyadh. You’ll never guess what happened next: “On his return to Egypt,” reported the New York Times last May, “the Sisi government pushed through new news media restrictions and prosecuted a rival political leader in the courts, further squeezing political rights and free speech.”

Take Saudi Arabia, too. In March, Trump welcomed Crown Prince Mohammed bin Salman, known as MBS, to the Oval Office, where he described the U.S.- Saudi relationship as “probably the strongest it’s ever been,” and told MBS that his father, King Salman, had “made a very wise decision” by appointing the prince as both his heir and de facto ruler of the country. Last week — less than two months after his visit to the White House — MBS ordered the arrest of 10 prominent Saudi activists, including a group of women’s rights campaigners. (So much for “Saudi Arabia’s Arab Spring.”)

Words matter. And Trump’s words, time and again, seem to provide aid and comfort to some of the world’s worst rulers. In the case of Bahrain, for example, it is indisputable that Trump gave the Gulf monarchy the green light last year to kill and torture its opponents. You don’t have to take my word for it, or even the word of Human Rights Watch. Listen to the testimonies of Bahraini torture victims themselves.

On May 24, 2017, three days after the U.S. president’s photo-op with the Bahraini king, human rights lawyer Ebrahim Sarhan was summoned to the headquarters of Bahrain’s fearsome National Security Agency. Upon his arrival, as United Nations human rights experts later documented, he was “allegedly beaten for around half an hour by the agents, who … forced his legs apart in order to kick him in the genitals” and “also given electrical shocks and repeatedly insulted.” When Sarhan tried to remind the agents of his legal rights, they laughed at him and explicitly cited Trump. “Hahaha, you have to forget the law and human rights, the U.S. president has changed and the situation has changed, and what the U.S. president wants to have has arrived to him, and from now on we will do with you what we want,” one of the agents declared, according to written testimony from Sarhan.

On May 26, five days after the Trump/Al-Khalifa meeting, women’s rights activist Ebtisam Al-Saegh was told to report to an office of the National Security Agency, where agents “beat her, stripped and sexually assaulted her, forced her to stand for hours, and threatened to rape her daughter and torture her husband,” according to the U.S. State Department’s 2017 human rights report. Al-Saegh has said that her interrogator mocked her, asking: “Do you know that we have a green light from Trump?” She is, therefore, of the view that “everything that happened to me [is] under the responsibility of the U.S. administration.” (The State Department report conveniently omitted any reference to Trump’s name when referencing her case.)

The reality is that, with a license from Trump, the brutal Bahraini regime has escalated attacks on peaceful protesters while meting out collective punishment against opposition figures and human rights activists. “The number of death penalty [and] life sentences, and [the] stripping of citizenship, has tremendously increased since Trump came to power,” says Bahraini human rights activist Maryam al-Khawaja, whose father Abdulhadi was imprisoned for life for his role in pro-democracy protests. “[Trump] has emboldened Bahrain and the Gulf Cooperation Council.”

“When the regime can’t punish us directly, it goes after our families,” Sayed Alwadaei, the London-based director of advocacy at the Bahrain Institute for Rights and Democracy, tells me. “My wife was interrogated first and separated from our baby son. Then they arrested my 18-year-old brother-in-law, stripping him naked for two days, threatening him with rape, and then sentencing him to 13 years in jail for my supposed crimes.”

He continues, “My mother-in-law was repeatedly interrogated and had to be hospitalized as a result of her trauma. She has been jailed for three years, also for my activism.”

A year ago, Trump vowed to the king of Bahrain that “there won’t be any strain with this administration.” This is what a lack of “strain” looks like: the killing of protesters at a sit-in; the collective punishment of families; the jailing and torture of innocent men, women, and children.

We might want to laugh out loud or roll our eyes when Trump rants or tweets, but the fact of the matter is that his words have lethal consequences. The president of the United States has blood on his hands, from Bahrain to Saudi Arabia to Egypt, and, across the region, al-Khawaja tells me, “the people will remember which governments helped prop up their regimes while they were struggling for change.”