Yemeni villagers recount the horror of looking for their children after a Saudi Arabian airstrike on a wedding party. 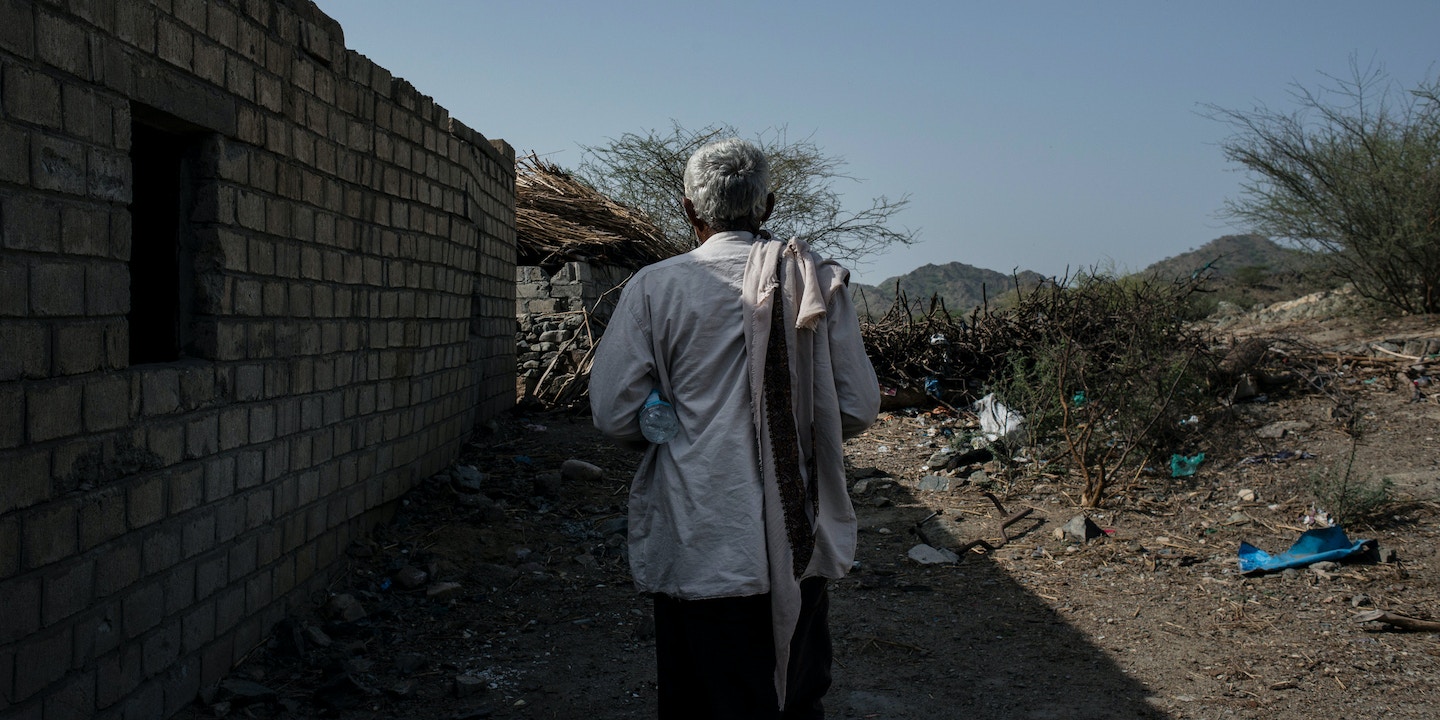 On April 23, the villagers of Al-Raqah, in northern Yemen, gathered to celebrate the town’s second wedding in as many days. They had walked as much as an hour from surrounding towns to sing, dance, and congratulate the 20-year-old groom, Yahya Ja’afar. The party was simple: a wedding tent constructed of thick tree branches and colored fabric, the couple’s one-room home filled with men and boys playing drums and wearing wreaths of jasmine on their heads, the women over the hill in another tent, singing and dancing alike. With the sound of the music, no one heard the warplane as it circled overhead.

“We were singing and dancing, everything was winding down. We were about to leave,” said Saleh Yahya, a 35-year-old villager. “Then, all the sudden, I was on the ground, I couldn’t hear anything. We totally lost control of our senses. There were body parts around me, I was just looking for my children.” He found one whole and alive; the other’s body was broken beyond repair.

The drum that had been played by the groom and wreaths which had been worn by those celebrating at the wedding sit amid the rubble on May 6, 2018.Photos: Alex Potter for The Intercept

The missile had struck around 11 p.m., killing 23 of the revelers, and wounding over 60, according to villagers who spoke with The Intercept. Most of the dead were in pieces.

“It took us over a week to find all the body parts,” Saleh Yahya said in an interview in Al-Raqah on May 6, two weeks after the strike.

Al-Raqah isn’t on most maps; it’s no more than a blip on a hillside two and a half hours from the city of Hajjah, and over an hour from any paved road. To get to Al-Raqah, one follows a rocky and nearly dry river bed, and the directions offered by locals. There are few vehicles around, other than the occasional motorcycle; anything more would break down on the rough path. This is a place for farmers, not fighters. Yemeni men show the scars from fragmentation injuries on a young man from the village on May 6, 2018 in Al-Raqah Village, Bani Qais District, Hajjah, Yemen.

Yet for some reason, the wedding of Yahya Ja’afar and his bride Fatum Allam came into the sights of the 10-country coalition led by Saudi Arabia that has waged a devastating, three-year war in Yemen.

The coalition’s aim is to subdue the Houthis, a politico-religious group in Yemen that took over the government and ousted its Saudi-allied president in 2014. The coalition, supported by the U.S. military with refueling, munitions, and targeting information, has ruthlessly bombarded the country. This week, the coalition invaded the Houthi-controlled port city of Hodeidah, an attack which many fear will result in a humanitarian disaster. In all, at least 10,000 civilians have been killed in the war; the United Nations in 2017 estimated that the majority of civilian deaths to that point had been caused by coalition airstrikes. Saudi Arabia has drawn widespread condemnation and accusations of war crimes for hitting civilian targets like homes, schools, markets, hospitals — and weddings. A bridge which connects Hajjah with the Bani Qais District is partially destroyed after an airstrike on May 6, 2018.

The Saudis have provided no explanation for the strike on Al-Raqah (a request for comment to the Saudi embassy in Washington went unanswered.) The men in Al-Raqah say they do not carry weapons (I saw none during my visit), and fighters did not attend the wedding. In the village, all of the men wore a simple sarong and button-up shirt, nothing to hint at a military affiliation. Some insisted on showing me the inside of their houses, pointing out what little they possessed: a bed or two, bags of food, and some kitchen supplies.

According to eyewitnesses I spoke with, when the strike hit in Al-Raqah, women poured out of their celebration, screaming, looking for their children and relatives. Rescuers who had arrived to help from nearby villages told the others to run, since planes were still circling overhead. Rendered temporarily deaf from the explosion, family members ignored them and continued to pull out the bodies of their loved ones from the rubble. It was hours before ambulances arrived from Hajjah, delayed by the difficult terrain. 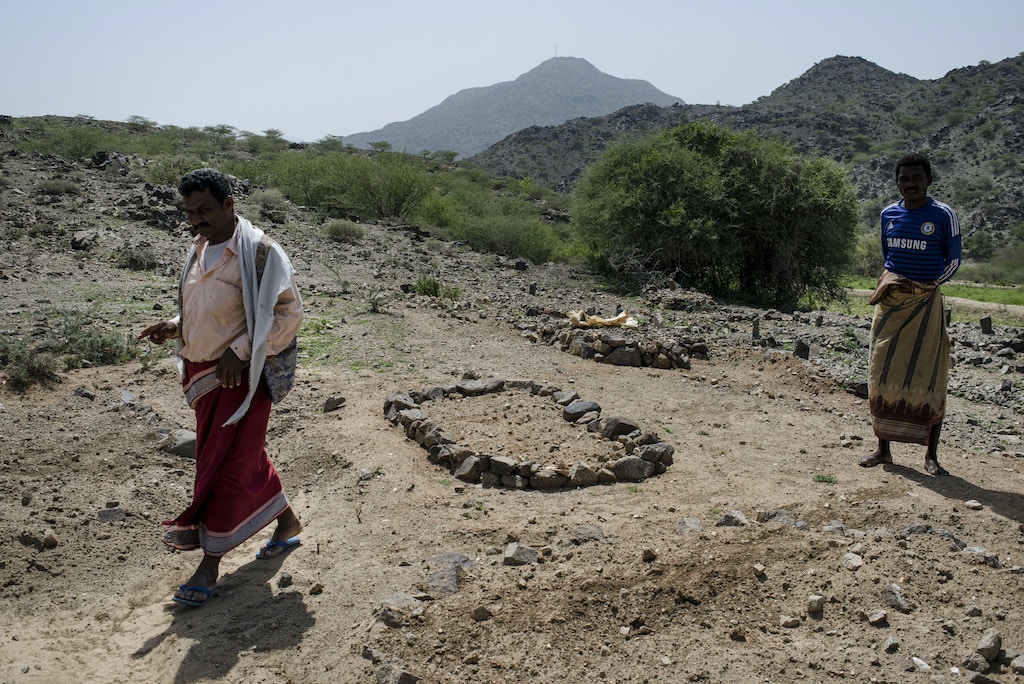 Saleh Yahya, 35, walks through one of the graveyards where the dead from the wedding strike were buried.

As we spoke at the site of the strike, Othman Ali, 35, a thin man wearing a straw hat, held his son’s hand.

“This went from a very happy day to a catastrophe,” he said. “The women are terrified. Most of them won’t come out of the house to work, and some of them when they hear a loud noise, they wet themselves.”

More villagers appeared, all eager to describe what happened, all eager for answers. Everyone I spoke with still had trouble hearing, especially the groom, Ja’afar, who survived the strike. His brother, Ali, spoke close to his ear and motioned for him to come over. We went to his parents’ home, where he and Allam now live, since their home was damaged in the strike. (Allam was initially reported killed.) Ja’afar’s speech was stilted, like someone who can’t quite hear themselves over the din of a noisy room, except that the small and plain house was completely silent. “We only officially got married and moved in together yesterday,” said Ja’afar, as he and Allam looked away from each other shyly. “We couldn’t do it right after the strike; we were too shocked. We lay awake at night now, worrying something will happen still. You never forget something that happens on a special day.”

At the hospital in Hajjah, children who were injured in the strike awaited reconstructive surgery. Some of their fathers sat vigil at their bedsides, occasionally passing them juice or fresh mango. None of the victims could recall much of the strike, only that they were celebrating, and then they were in pain. Nearly all of them were malnourished, their bone-thin bodies unable to keep up with the metabolic demands of injury and recovery. Mohammad Ali picks up his son, Abdo, on May 6, 2018, at Jumhuri Hospital in Hajjah, Yemen.

Nine-year-old Abdo Mohammad Ali sustained a compound arm fracture and abdominal trauma; surgeons took him away to stitch his intestines back together. Brothers Abdo and Suleiman Mohammad looked in better spirits, despite the fact one had lost a foot and the other the use of a foot, and despite that 12 members of their family died in the strike. Thirteen-year-old Hussein Hasan slept with a shawl partially covering his face, stretched out in the bed in such a manner that the shawl might have been his shroud.

His father, Hassan Saghreer, woke him up to speak, revealing the major chest and abdominal trauma that will prevent him from going home for weeks. The family’s village is two hours from the nearest health care facility. “He spent 10 days in intensive care and had many surgeries; we didn’t think he was going to survive,” Saghreer said. 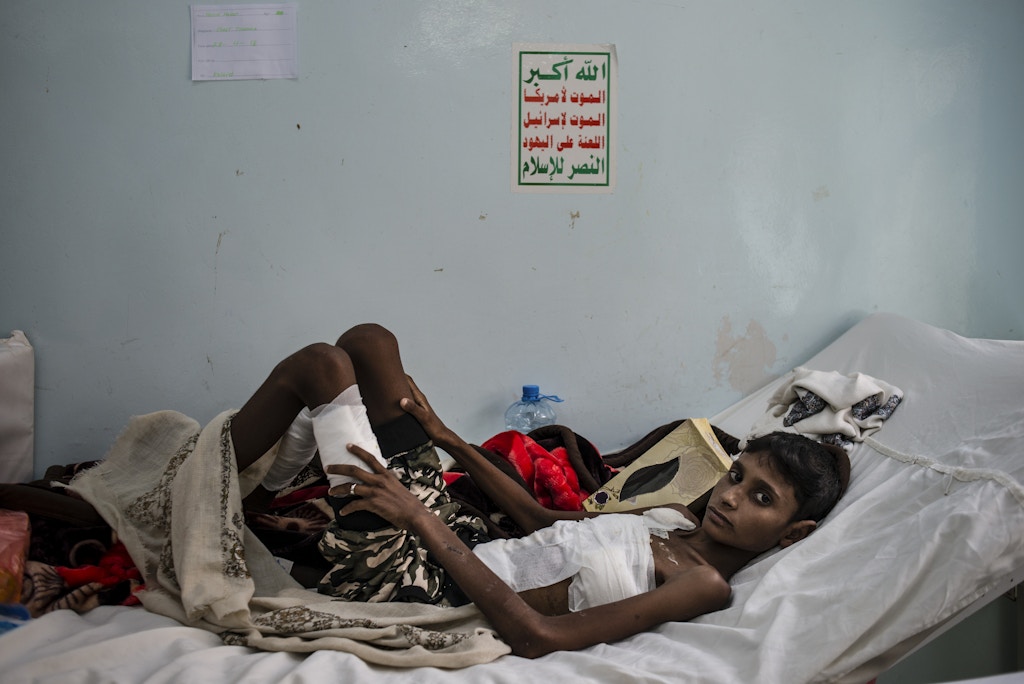 Hussein Hasan lays in bed on May 6, 2018, at Jumhuri Hospital in Hajjah, Yemen. Hussein sustained severe abdominal and chest trauma and spent 10 days in intensive care.

Back in the village, Allam Yahya, the father of the bride, dragged a stick through the dirt, making circles in the dry earth near the remains of the wedding tent. Though the villagers have attempted to return to their normal lives, he remarked that things would never be the same again.

“We won’t have weddings anymore. Even if someone wants to have one, no one will come. It is finished,” he sighed, and walked slowly back under a tree, taking shelter from the late-morning sun.

This story was supported by the Pulitzer Center on Crisis Reporting.
Update, June 21, 8:13 p.m.
This story originally cited an estimated civilian death toll of 5,000 for the conflict in Yemen from the United Nations in 2017; others estimates are much higher, and the story has been updated to reflect that.

Top photo: A Yemeni man walks through the rubble of a wedding tent on May 6, 2018, in Al-Raqah Village, Bani Qais District, Hajjah, Yemen.