So Long, Scott Pruitt. We Knew You All Too Well.

Scott Pruitt was doing exactly what President Trump wanted at the EPA. Expect the same from his successor. 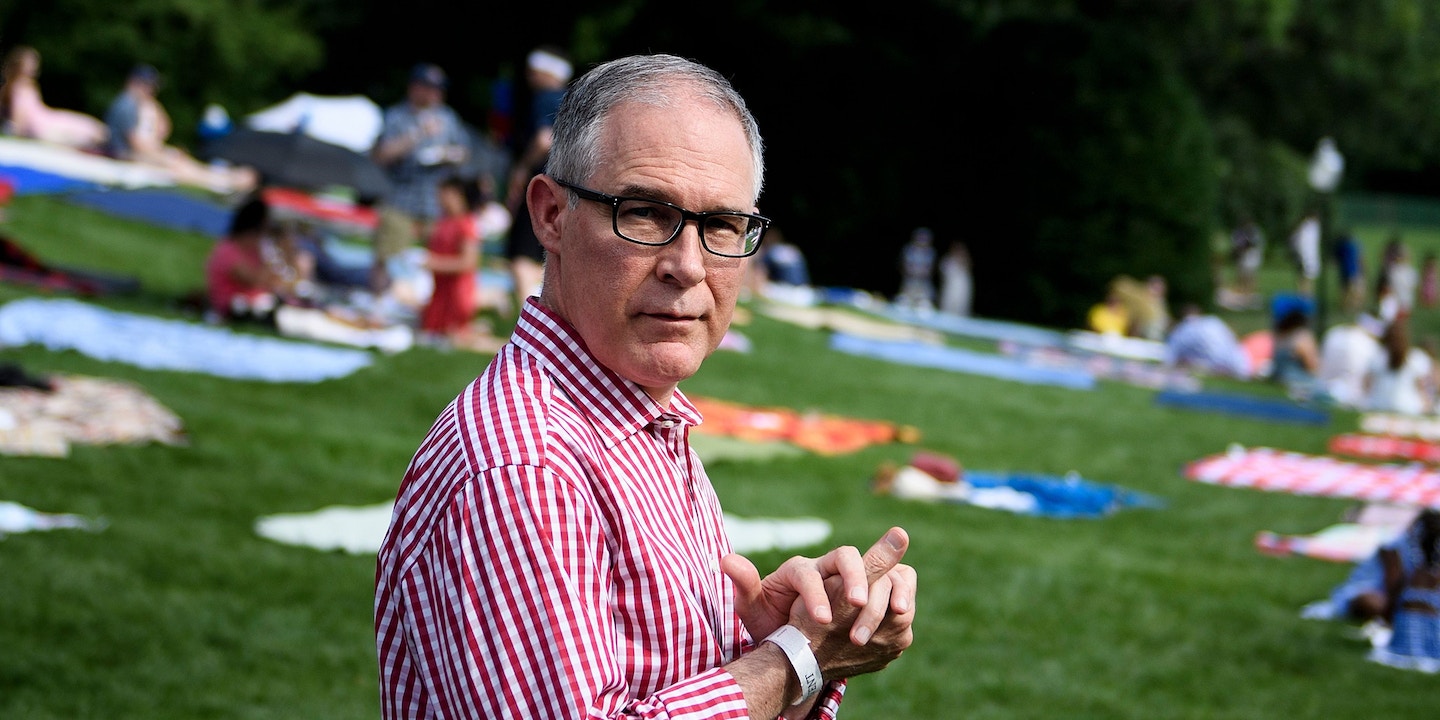 What finally pushed Scott Pruitt over the edge? Was it the woman with the baby who let him have it in a fast food restaurant? Or his use of Environmental Protection Agency staff to try to snag his wife a Chick-fil-A franchise? The secret calendar? The tactical pants?

The EPA administrator generated headlines with a stream of bizarre, inappropriate, and self-serving actions in his 16 months in office. At last count, there were more than a dozen investigations into his ethical lapses.

Pruitt, who served as Oklahoma’s attorney general before being confirmed to lead the EPA last February, had a taste for the finer things — nice cars with flashing lights and sirens, biometric locks, extremely secure phone booths, and big houses. The combination of this expensive taste — the big house in Tulsa came with a big mortgage — and his public servant’s salary was part of the reason the leader of a federal agency got mucked up in low-rent condos and searching for a job that would pay his wife at least $200,000.

President Donald Trump, who tweeted about Pruitt’s resignation Thursday afternoon, averted his gaze from the slime pit his appointee had created and stuck to the line he has towed since Pruitt began generating scandals last year. “Within the Agency Scott has done an outstanding job and I will always be thankful to him for this,” Trump wrote.

I have accepted the resignation of Scott Pruitt as the Administrator of the Environmental Protection Agency. Within the Agency Scott has done an outstanding job, and I will always be thankful to him for this. The Senate confirmed Deputy at EPA, Andrew Wheeler, will...

In other words, Pruitt was doing exactly what the president wanted. That’s been the trouble with the pairing of the Oklahoman, whose rise through politics was powered by the state’s oil and gas industry, with the famously amoral president. Both deny climate change and seem to view the EPA as an arm of industry. But, for both, that outlook is transactional.

Pruitt, who appears to be passionate about baseball and religion, doesn’t seem particularly interested in the environment — or even, arguably, in destroying it. He just wanted what he could get in return. In Oklahoma, where he sided with poultry companies in Arkansas to subvert environmental protections for a river in his own state and suppressed a report on corruption at a Superfund site, what he wanted was the political support of a wealthy industry. In Washington, where he had recently expressed interest in Attorney General Jeff Sessions’s job, he wanted the approval of the president. (Pruitt’s resignation letter even seemed to be aimed for the president’s good side: “Truly, your confidence in me has blessed me personally,” he wrote, adding that he believed God “brought me into your service.”)

For his part, Trump didn’t care about Pruitt’s scandals as long as he was doing the bidding of industry, which is why it took so long for his tenure to end. When it did, Democrats and environmentalists rejoiced as if the house had fallen on the wicked witch.

“Finally,” was the headline quote of a press release from Rep. Don Beyer, D-Va., who, just hours before, had called for a criminal investigation into Pruitt’s secret calendar. A Washington, D.C., restaurant whipped up a special cocktail for the occasion. Even Republicans joined in the post-Pruitt celebration.

The party will be brief. The president has another loyal industry servant primed for service. Former coal lobbyist and current EPA deputy administrator Andrew Wheeler will take over as the agency’s acting director on Monday. His views on climate change, the rollback of the Clean Power Plan, and the ongoing evisceration of other environmental protections are virtually indistinguishable from Pruitt’s.

In several ways, Wheeler is a more daunting adversary. He has more experience working to undermine environmental regulations and deeper ties to industry than his predecessor. Before becoming a principal at the firm Faegre Baker Daniels, Wheeler was chief counsel for the Republicans on the Senate’s Environment and Public Works Committee. Before that, he worked for the grandfather of climate denial, Sen. Jim Inhofe, R-Okla. And before that, he served in Presidents George H.W. Bush’s and Bill Clinton’s EPA.

Wheeler is so close to the decision-makers in Congress that he actually raised money for two of the senators who went on to confirm his appointment. As The Intercept reported in February, he made campaign contributions and hosted fundraisers in May 2017 for two Republican senators, Inhofe and John Barrasso, R-Wyo., both of whom are members of the Committee on Environment and Public Works.

While Pruitt was a Washington novice, Wheeler is a consummate inside-the-beltway lobbyist who has served many companies that are subject — and sometimes resistant — to EPA regulation. Among his former clients are Murray Energy, which teamed up with Pruitt to sue the EPA; Energy Fuels Resources Inc., a uranium mining company that recently petitioned the Trump administration to decrease the size of the Bears Ears National Monument; and a liquid natural gas company called Bear Head LNG Corp. Wheeler also represented Underwriters Laboratories, which does testing and certification for the EPA among other organizations; Xcel Energy; and Insurance Auto Auctions, a salvaged car company, according to his financial disclosure form.

For Wheeler, the deep ties come with big money. While Pruitt appeared to be strapped, Wheeler’s last job paid a base salary of $741,000, which was augmented by payments from his individual clients. So it’s unlikely that the new EPA administrator will be casting about for earning opportunities for his family members. Instead, with Pruitt’s windy, scandal-ridden journey finally come to an end, Wheeler — and his adversaries — will likely return their focus to the environment.

Top photo: Environmental Protection Agency Administrator Scott Pruitt at a picnic for military families on the South Lawn of the White House on July 4, 2018.