Trump Ripped This Immigrant Family Apart. They Watched the State of the Union Together From the Congressional Gallery.

Albertina Contreras and her daughter, Yakelyn, were victims of Donald Trump’s family separation policy. On Tuesday, they attended the State of the Union. 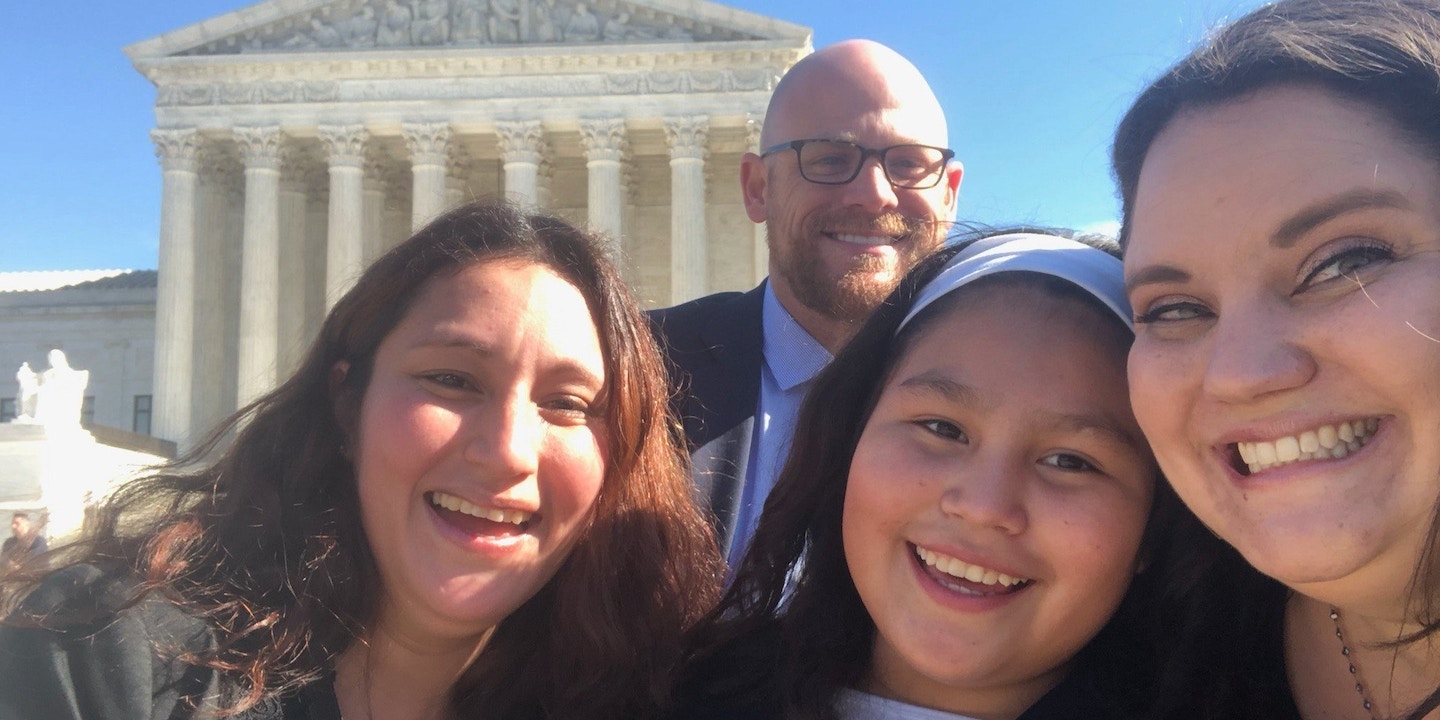 Last summer, Albertina Contreras could never have imagined that she would be spending an early February evening sitting in the gilded chamber of the U.S. Congress. In May, Contreras was locked in solitary confinement for eight days, without her daughter, Yakelyn — who had recently been taken from her by armed border guards.

Last night, Contreras was in Washington, D.C., listening to the man whose signature policies had incited those guards to tear Yakelyn away from her. President Donald Trump’s deluded fulminations against people like Contreras came to the fore again on Tuesday, as he stood on the dais and proclaimed that he was creating a “safe, lawful, modern, and secure” immigration system. And there Contreras was, with Yakelyn — it was the young girl’s 12th birthday — as special guests of Sen. Jeff Merkley, D-Ore., watching Trump spout his anti-immigrant anger to the nation.

“It’s still a hard reality for all the moms and dads who are still not reunited with their kids. Really, it’s a moment of desperation.”

Trump — in line with his Republican Party’s agenda — took the time to bring up the tragic cases of people whose family members were allegedly killed by undocumented immigrants, noting “the heartache they have had to endure.” The children who recently died in Border Patrol custody went unremarked upon; nothing was said of the humanitarian aid workers being prosecuted and convicted for leaving water on trails where migrants die of thirst; no thought was spared for the heartache endured by families, like Contreras’s, who were torn apart by government agents, nor for those who remain separated from one another.

“Very happy,” Contreras said when I asked, a few hours before the State of the Union, how she would feel about being in the same room as Trump. “Thankful to be here. I don’t feel fear.” What would she say to Trump if she got a chance to speak directly to him? “I’d tell him that he should look into his conscience, that as migrants we have rights, that we are all worthy of that.” Yakelyn holds up an official invitation to the State of the Union address.

Contreras knows that even as she sits free in the congressional gallery, others face the same fate she once did. A recent report from the Health and Human Services Office of Inspector General revealed that not only are family separations continuing, but the thousands of officially reported cases did not include all of the separations. “It’s still a hard reality for all the moms and dads who are still not reunited with their kids,” Contreras said. “Really, it’s a moment of desperation.”

Contreras is one of a handful of immigrant guests at the State of the Union — their stories highlighting the injustices of Trump’s bigotries and his policies toward people who come to the U.S. seeking refuge. Rep. Adriano Espaillat, D-N.Y., invited Yeni González, another mother who was separated from her three children at the border. And Victorina Morales, an undocumented woman, worked as a housekeeper for years at the Trump National Golf Club in Bedminster, New Jersey. She will attend the speech as the guest of Rep. Bonnie Watson Coleman, D-N.J. “I’m not scared to show my face,” Morales, who recently quit her job and came forward, told the New York Times after being invited to Washington. “I am not speaking for me, I’m speaking on behalf of millions of undocumented immigrants who live in the United States.”

Trump’s immigration policies have led to a broad crackdown on people like Morales and Contreras — those who seek to come here out of desperation and, in some cases, arrive only to continue living in insecurity. Trump has used U.S. Immigration and Customs Enforcement in the interior to chase down people who are in the country without authorization. ICE has targeted their places of work, their homes, hospitals, and courts, as well as the sanctuaries where they organize to help those forced to navigate the byzantine bureaucracies of immigration law. The result has been devastated families and communities. Simultaneously, Trump uses the rhetoric of nativist demagogues to create the impression of a migration crisis at the border, while the real crises have been of his own making. The activists who work to help immigrants on the border have, again, been targeted, to say nothing of the families that were ripped apart in a jarring display of American cruelty — the kind of cruelty Contreras experienced firsthand.

Amazing to spend the day today with Yakelin. She is resilient, poised, and smart (as is her mom). Why is Donald Trump scared of them? They are exactly the kind of people we should want in America, not building a wall to keep out or locking up. pic.twitter.com/tbKzrkfhhD

Trump’s rhetoric at the House of Representatives on Tuesday, though bowdlerized for a national audience, mirrors the sort of language Contreras encountered when she first crossed the border. “You’re animals,” a border guard told her. “Don’t you watch the news? We don’t want to see more immigrants here.” The venomous guards prompted Contreras’s daughter, Yakelyn, and other children to scream, but Contreras was used to that kind of language, that kind of cruelty: It was why she was fleeing Guatemala.

Guatemala has one of the highest rates of deadly violence against women in the world, and Contreras’s ex-boyfriend regularly beat her in front of her children, she said. After going to the police for help and realizing they weren’t going to protect her, she set out for the United States. While she left her two youngest boys with her sister, Contreras didn’t want to leave her daughter, who would soon be a teenager, to suffer gender-based scorn and physical abuse.

For the last few years, the U.S. had served as an inconsistent refuge for women fleeing such violence. But last fall, then-Attorney General Jeff Sessions ruled on a case limiting women fleeing domestic violence from access to asylum protections. (The ruling applies to other countries as well.) Sessions’s argument was that domestic violence is a “private” crime — a notion that leaves women unprotected by the law and reinforces misogynistic tropes.

Such a senseless overturning of a legal precedent was pulled off without much fanfare, perhaps because it came in a country where violence against women remains entrenched — indeed, in a country where the president, who stood tonight before Contreras to give a celebrated speech, has lewdly boasted of groping women.

It’s not hard to imagine Contreras cringing when she heard Trump say, “I want people to come into our country in the largest numbers ever, but they have to come in legally.” Contreras twice tried to cross the bridge in El Paso, Texas, to ask for asylum — an act that is legal under both U.S. and international law. Both times, Customs and Border Protection guards turned her away, forcing her to make a dangerous crossing with her daughter.

After suffering the first eight days of her detention at the border in solitary confinement, Contreras was held for more than 40 additional days before she was released in El Paso. She found temporary refuge at the Annunciation House, a faith-based charity that operates a shelter. At that point, she hadn’t spoken to her daughter for over 50 days, according to Taylor Levy, the legal coordinator at Annunciation House. Yakelyn, meanwhile, was almost 12 hours away in an Office of Refugee Resettlement facility in the southern tip of Texas. Levy told me Yakelyn attended classes and was comfortable there, but she was also scared. She recalled watching other separated children getting calls from their parents and bursting into tears. Some of the kids were learning that they or their parents were being deported — without being reunified first. Yakelyn’s tribulation was to know nothing: She hadn’t heard from her mother.

Finally, with the help of Levy, Contreras and her daughter were reunited. They moved to Tennessee to fight their immigration case. Another attorney representing the mother-daughter pair, Andrew Free, told me that Yakelyn is pursuing special immigrant juvenile status, a classification afforded to children who have been abandoned, abused, or neglected by their parents — in Yakelyn’s case, her father. And Contreras is applying for “withholding of removal,” a legal status that protects people from deportation but does not allow them to become citizens or travel outside of the country.

Free said that newly discovered memos by senior administrators and legal decisions in federal courts cast Trump’s family separation policy as an act comparable to kidnapping. What happened to Yakelyn “contains all of the essential elements of kidnapping,” he said. If Contreras doesn’t receive the protection of withholding of removal, Free explained, she may qualify for a U-visa, which is for people who have suffered a crime and are willing to work with law enforcement. “It shouldn’t matter that the people who effectuated the kidnapping, who took someone against their will and without legal justification,” are the U.S. government, he said.

Contreras, for her part, had a message for the family members still separated from each other: “That they have faith and patience. And that they be very courageous, like we’ve had to be.” She told me she wants to speak up and be present at the State of the Union for their sakes. She said, “I hope they get their kids back soon.”