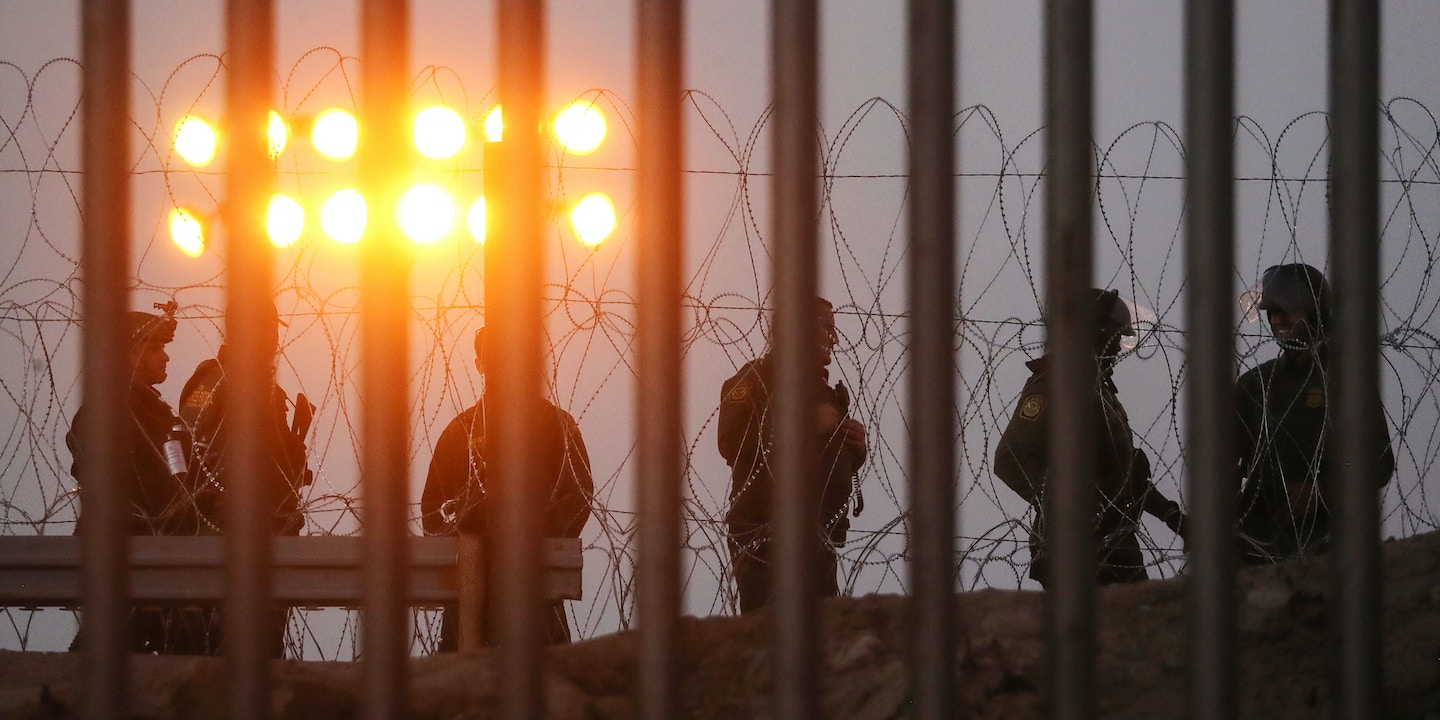 Since Donald Trump’s inauguration more than two years ago, Alex Mensing, a volunteer with the immigrant rights group Pueblo Sin Fronteras, has been pulled into secondary screening nearly 30 times at U.S. ports in the San Diego-Tijuana area, as well as the Los Angeles airport. His longest interrogation, in late 2018, spanned roughly four hours. It was hardly an isolated experience, Mensing told me. “Pretty much every member of Pueblo Sin Fronteras who crossed the border was interrogated during that time,” he said.

An Intercept investigation in February uncovered the backstory to those interrogations, revealing that Pueblo Sin Fronteras was targeted in a secretive joint U.S.-Mexican intelligence gathering operation, which also swept up immigration attorneys and journalists working along the border. NBC News later obtained documents showing that the operation was carried out by officials within U.S. Customs and Border Protection, the Border Patrol, Immigration and Customs Enforcement, and the FBI, and included a secret database made up of 59 activists, journalists, attorneys, and unspecified others. At least 10 of the government’s targets were volunteers with Pueblo Sin Fronteras. Mensing was one of them.

While CBP eventually admitted to the operations, which sparked multiple internal and congressional investigations, the federal law enforcement agencies involved have emerged from the episode largely unscathed. Mensing is hoping to change that. On Wednesday, he joined two other plaintiffs, represented by the American Civil Liberties Union and Kirkland & Ellis, in filing a lawsuit against CBP, ICE, and the FBI for violations of their First and Fourth Amendment rights. Though Mensing and his co-plaintiffs “did not commit any crime, violate any customs or border regulation, or engage in any other activity that could reasonably give rise to a suspicion of criminality,” the ACLU alleged, they nonetheless “faced repeated and prolonged detentions and interrogations at the border.”

“The government’s powers are not limitless,” the complaint, filed in the U.S. District Court of Arizona, read. “It cannot target people for intrusive surveillance, detention, searches, and interrogation because of their expressive political activity protected under the First Amendment. And it cannot use its border control powers — to regulate the import of goods, verify travelers’ identities, and stop the entry of contraband — to conduct suspicionless fishing expeditions for criminal activity unconnected to border enforcement that it could not conduct within the country.”

The Trump administration’s border enforcement agencies illegally and unconstitutionally exploited their border enforcement authorities, the complaint went on to say, by “directing surveillance, detention, intrusive searches accompanied by excessive physical restraint, and intensive interrogation at the border” against individuals “because of their lawful humanitarian activities.”

The ACLU’s suit comes one year after thousands of migrants, most from Central America, made their way by caravan to the U.S. border. Some were running from the violence and instability of their home countries, others were fleeing the devastating impacts of the climate crisis on the rural communities they called home.

Families with children traveled together, seeking safety in numbers as they navigated stretches of Mexico where kidnapping, extortion, and murder of migrants are entrenched problems. Though it was not the first, the October 2018 caravan prompted a furious response from Trump, who deployed more than 5,000 troops to the border. “Operation Faithful Patriot” was initiated just in time for the 2018 midterm elections. Later changed to “Operation Secure Line,” it was the same campaign under which the surveillance of journalists, lawyers, and advocates was justified. In the months that followed, U.S. border security forces twice launched tear gas into Mexico in response to the caravan, once in November and again on New Year’s Eve. Both times, women and children were caught up in the gassings.

As The Intercept’s and NBC’s reporting revealed, the U.S. also ramped up scrutiny of advocates, lawyers, and journalists working in the Tijuana-San Diego area. Mexican law enforcement snapped photos of the passports of photojournalists working near the border wall. When asked who they were taking the images for, the Mexicans replied, “For the Americans.” The photojournalists were later pulled into secondary screening as they attempted to reenter the U.S. Their images and electronics were searched, and they were pumped for information about the caravan and the activists working with the migrants.

Two award-winning photographers were denied reentry into Mexico, barring them from the place where their journalistic work was focused. Immigration attorneys with the prominent border law firm Al Otro Lado were similarly denied reentry. They filed their own lawsuit, also with the ACLU, challenging the government’s actions earlier this year.

By late 2018, interrogations of Pueblo Sin Fronteras’ volunteers had become the norm. Volunteer Jeff Valenzuela, Mensing’s co-plaintiff in the ACLU suit, got it particularly bad. A U.S. citizen living in Tijuana with family in California, Valenzuela told his story of border harassment for the first time in an interview with The Intercept earlier this year, explaining how he had been sent to secondary screening a half-dozen times from December through February. In one of the instances, which occurred on Christmas Day as he was attempting to visit his family, border guards searched his phone and he was held for roughly 2 1/2 hours. When Valenzuela attempted to cross the border again days later, he was taken to a concrete cell and shackled to a steel bench for approximately five hours.

The targeting of immigration advocates has extended beyond the San Diego-Tijuana area. In June 2017, roughly 30 Border Patrol agents swept through a humanitarian camp where the faith-based group No More Deaths was providing medical care to a group of migrants who had crossed the desert in southern Arizona. The raid marked the beginning of a sustained crackdown on humanitarian aid providers in the state. In the last two years, the U.S. attorney’s office in Arizona has brought nine federal cases against No More Deaths volunteers for leaving jugs of water in the Sonoran Desert, where thousands of migrants have died. In the most serious case to stem from the crackdown, Trump administration prosecutors charged Scott Warren, a geographer from the unincorporated border community of Ajo, with harboring and conspiracy for providing two undocumented migrants with food, water, and beds to sleep in over three days last year. His case ended in a hung jury over the summer. His retrial is scheduled for mid-November. Warren still faces up to 10 years in prison.

Ana Adlerstein, the third plaintiff in the ACLU suit, felt the weight of the Arizona crackdown firsthand when she accompanied an asylum-seeker to the Lukeville port of entry earlier this year. Adlerstein was taken into custody during the episode and, according to the complaint and an interview she gave to The Intercept at the time, told that “the Fourth Amendment doesn’t apply here.” Though she was released after several hours, Adlerstein said U.S. officials accused her of violating the same smuggling statutes that Warren was charged under. Months later, Amnesty International released a report documenting how the threat of smuggling charges has appeared again and again in dozens of cases related to the Trump administration’s targeting of aid providers on the border. “By discriminatorily targeting human rights defenders — most of them US citizens — based solely on their political or other opinions, speech and activities, the Trump administration has violated international law, the US Constitution, US laws, and corresponding DHS policies that acknowledge those legally binding civil liberties protections,” the July report said.

Last month, Mensing crossed the border into the U.S. for the first time in more than half a year. “I got sent to secondary,” he said. “And I have been sent to secondary every single time I have crossed the border since.” The constant pressure from the state has taken its toll, Mensing explained, not just personally, but also on efforts to advocate for some of the world’s most vulnerable populations. “If it hadn’t been for criminalization by both the U.S. government and the Mexican government,” Mensing said, he probably would have spent the spring accompanying caravans north, as he has for the last two years. “It’s completely changed the way that the organization operates. It completely changes the way that I’ve engaged,” Mensing explained. “There’s a lot of stuff that Pueblo Sin Fronteras and I could have done in the last year to support migrants, to support migrant leadership, to support migrant safety, that we weren’t able to do because of this process of criminalization.”

For Mensing, the targeting he and other advocates have experienced is one thread in a larger story of efforts aimed at deterring migrants displaced from their homes from coming to the U.S. On Saturday, a caravan of more than 1,000 migrants from several African, Caribbean, and Central American nations set off at daybreak from Tapachula, a city in the southern Mexican state of Chiapas, headed north. They were less than a mile into the journey when Mexican security and immigration enforcement forces swarmed, stopping the caravan in its tracks. Three days later, Mensing was still dealing with the fallout, providing consultation to a Honduran national, and fellow migrant rights advocate, swept up in the crackdown.

“This kind of stuff is happening every day,” he told me. “The constitutional violations that we are suing about are an infinitesimal tip of the iceberg of what the U.S. government is doing to crack down on migrant rights groups.”