Reauthorizing the Commodity Futures Trading Commission as is would preserve loopholes while leaving the agency under-resourced and vulnerable to lawsuits. 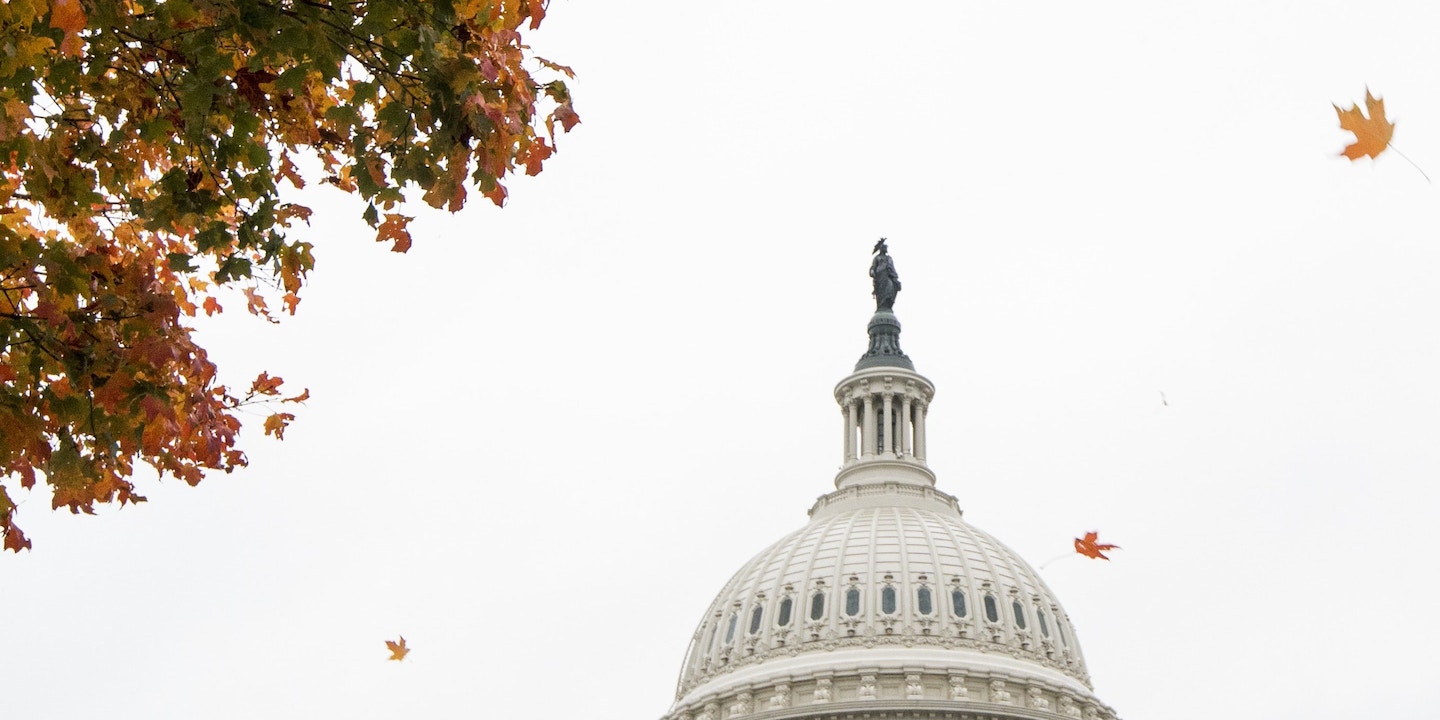 Last month, members of the House Agriculture Committee passed a bill reauthorizing the U.S. Commodity Futures Trading Commission, or CFTC: a little-known regulatory agency struggling under the weight of an expansive mandate. In the wake of the financial crisis, the CFTC was handed oversight of the $280-trillion U.S. market for derivatives, whose unchecked proliferation on Wall Street helped trigger the crash.

While the agriculture committee lauded the voice vote as a rare example of agreement across the aisle, not everyone is pleased with the bipartisan cooperation. Financial reform advocates are decrying what they see as a missed opportunity to repair some of the leaks sprung in the Dodd-Frank regulatory structure during eight years of a Republican-controlled House. Since the 2010 passage of the law, which overhauled financial regulation, banks have steadily chipped away at its framework.

Though the bill hasn’t yet been scheduled, the reauthorization process has caught the eye of the Congressional Progressive Caucus.

“We hope that the House will take this opportunity to strengthen the CFTC,” said CPC co-chairs Mark Pocan and Pramila Jayapal in a statement to The Intercept. “As we prepare to negotiate with the Senate on a final reauthorization, it is critical that we do all we can in the House to protect consumers from reckless Wall Street gambling.”

In a letter to House leadership, Americans for Financial Reform, or AFR, a progressive group that advocates for Wall Street regulation, warned that the 10-year CFTC reauthorization would preserve loopholes in derivatives regulation while leaving the agency under-resourced and vulnerable to industry lawsuits.

“The CFTC has become the Achilles’ heel of Dodd-Frank,” AFR policy director Marcus Stanley told The Intercept. “We expected that a Democrat-controlled House would’ve been making at least an effort to reverse some of the big defeats in [the law’s] implementation.”

To expedite bills deemed uncontroversial, the House majority leader can call for them to be considered under a suspension of the rules. So-called suspension bills require a two-thirds vote to pass, but debate is typically limited to 40 minutes and amendments are not permitted. The Center for American Progress has also urged House leadership to either improve the bill before it moved forward or consider it on the floor under an open amendment process.

“The CFTC’s role as the chief regulator of U.S. derivatives markets makes it a critical protector of economic stability,” wrote CAP, a center-left policy institute, in a letter to House leadership. “The agency’s reauthorization deserves full and careful consideration, and should include measures to resist and reverse loopholes in derivatives regulation won by big banks in the past and being proposed by the Trump Administration today.”

Policy analyst Gregg Gelzinis, who co-wrote the CAP letter, told The Intercept and the American Prospect that the markup of the bill lasted just 40 minutes. “This isn’t the bill that a Dem-controlled House should be saying, here’s our agenda on derivatives regulations,” Gelzinis said, noting that the bill weakens the House’s negotiating position with the Senate.

Once a marginal agency, the CFTC is hamstrung in part by the historical quirks of how it became a key regulator. It was established in 1975 and initially oversaw agricultural futures contracts used by farmers to minimize their risk.

And though the CFTC expanded its reach immensely, its jurisdiction continues to go through the agriculture committee, a relative backwater. “The problem has intensified post-crisis with expanded jurisdiction and focus of CFTC by covering most of swaps market,” Gelzinis said. “It’s very much a financial services topic that should go through [the Committee on Financial Services], as well as Ag.”

What’s more, Wall Street donations to members of the agriculture committee have risen steadily as its influence has expanded, The Intercept found in a review of campaign finance records. In the 2006 election cycle, the American Bankers Association and the four banks that dominate the swaps market — J.P. Morgan Chase, Bank of America, Citigroup, and Goldman Sachs — contributed $218,000 to agriculture committee members. The same group of donors gave more than $370,000 to committee members from 2011-2012. Since 2017, they have given more than $515,000 to current members.

The CFTC is in turn “especially vulnerable to political pressure” from Congress because of persistent under-funding, said Americans for Financial Reform in its letter. Advocates believe the agency should be permitted to levy fees from the entities it oversees, a power afforded to every other U.S. financial regulator, given its increasingly complex and critical mandate.

Among the previously unregulated products the agency now oversees are many types of the credit default swaps that fueled demand for subprime loans, as well as the notorious interest-rate swaps that banks peddled to hundreds of local governments and school districts, who then paid billions just to exit the highly unfavorable contracts.

Swaps allow two parties to exchange streams of cash flow based on fluctuations in asset prices, interest rates, or other values. While they can be used by a variety of actors to hedge risk, the nation’s largest banks control about 90 percent of the market. For Wall Street, swaps have been a gold mine, as well as the subject of some of the most intense maneuvering to circumvent regulation under the CFTC’s expanded mandate.

When Dodd-Frank passed in 2010, the Wall Street reform included a provision requiring federally insured banks to stop engaging in some of the riskiest types of trades and move their swap desks into separate affiliates.

The so-called swaps pushout rule was first proposed by former Senate Agriculture Chair Blanche Lincoln. The former Arkansas senator came out swinging against Wall Street during the spring of 2010 as she faced a primary challenge from her left from her state’s then-Lt. Gov. Bill Halter, who pressured her on her opposition to a public option during the health care debate. After the “Lincoln Amendment” passed, the CFTC began a rule-making process to implement the provision.

But from the start, the swaps rule drew ire from Wall Street and ambivalence from many Democrats. This boiled over into a congressional floor fight in December 2014, after bank lobbyists reportedly worked with Republicans to slip a provision into the year-end appropriations bill that radically weakened the swaps pushout rule.

A handful of Senate Democrats, including Elizabeth Warren, threatened to vote down the bill if the provision wasn’t removed. But Democratic leadership and the White House were ultimately willing to sacrifice swaps regulation in order to pass a budget deal. Former Rep. Barney Frank called the compromise “an outrage” and “a road map for stealth unwinding of financial reform.”

Thanks to the change, major banks including J.P. Morgan Chase, Citibank, Goldman Sachs, and Bank of America were able to retain $10.5 trillion worth of swaps, according to a 2017 analysis by the Government Accountability Office.

These same banks have also attacked CFTC regulations through lobbying, lawsuits, and hefty campaign donations to members of Congress.

While Wall Street writing big checks to legislators is hardly uncommon, they stand out in the agriculture committee. During the 2018 election cycle, the top campaign donors of ranking House Agriculture Committee member Mike Conaway, R-Texas, included the National Cotton Council, the National Pork Producers Council, and the American Bankers Association.

Since 2010, the year Dodd-Frank passed, Conaway has received at least $116,000 in contributions from the American Bankers Association and political action committees associated with Goldman Sachs, Citigroup, and Morgan Stanley.

Meanwhile, Conaway has repeatedly backed measures favored by the banking industry. The House reauthorization bill changes how the CFTC considers the cost-benefit of its regulations, a move that advocates say will strengthen banks’ ability to sue in court. The industry has sought this change for years, and Conaway has consistently backed it. “For the past year, I have pushed, cajoled, and begged the CFTC to do a better job in analyzing economic impacts during their rule-making,” he said in a 2012 speech to the International Futures Industry Conference.

Conaway’s office did not respond to a request for comment.

Among the committee’s majority members, 14 representatives are aligned with the New Democrat Coalition, a group that fundraises heavily from Wall Street and maintains close ties with its lobbyists. Eleven members of the House Financial Services Committee are part of the centrist coalition, and have drawn fire from progressives for backing deregulation.

Several Democratic members also received sizable donations from executives at the hedge fund Bain Capital, a player in the growing market for financial technologies, or fintech, including virtual currencies like bitcoin.

In recent years, Bain has invested hundreds of millions into bitcoin and blockchain companies, as well as cryptocurrency exchanges such Seed CX that will offer CFTC-regulated derivatives. Regulation of virtual currency remains a gray area, but a federal court last year confirmed the ability of the regulator to investigate and combat fraud in these markets.

While Abigail Spanberger, a freshman representative from Virginia and New Democrat member, swore off corporate PAC donations, she accepted nearly $20,000 in individual donations from Bain executives. Spanberger’s office did not respond to a request for comment.