In a court filing, Jonathan Mitchell identified Juris Capital as the backer of a wave of lawsuits he’s pursued following the Supreme Court’s Janus ruling. 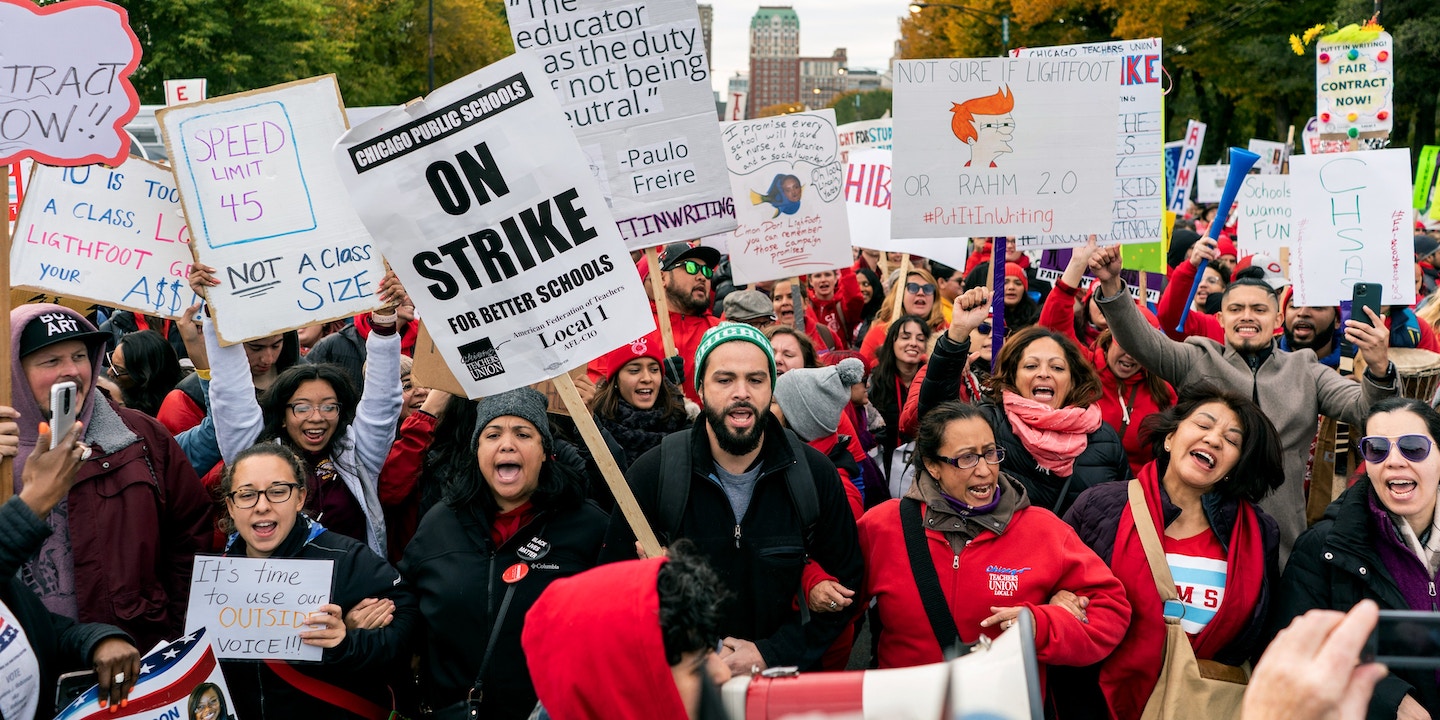 A lawyer who filed 21 class-action lawsuits against unions over the last two years has previously said that his lawsuits were not part of any concerted effort to target public-sector unions and that “the idea to bring these lawsuits was entirely my own.” It turns out, however, that his lawsuits are backed by a small finance litigation firm in Chicago, according to a court filing that has not been previously reported. The firm, Juris Capital, is in the business of bankrolling litigation upfront, making bets that it will enjoy an ample cut of a plaintiff’s proceeds.

In its landmark Janus ruling, the Supreme Court said in June 2018 that public-sector unions cannot collect fees from workers who do not wish to be union members. The court deemed unconstitutional a longstanding practice of unions charging so-called agency fees to workers who did not opt to join a union but benefited from its bargaining nonetheless.

Mitchell’s litigation seeks hundreds of millions of dollars in retroactive payments from public-sector unions, refunds on behalf of workers ideologically opposed to ever having paid any union agency fees. Most states have two- to three-year statutes of limitations on these kinds of suits, while Minnesota’s goes back six years. In the immediate aftermath of the Janus decision, conservative legal foundations — including the Pacific Legal Foundation, the Buckeye Institute, and the National Right to Work Legal Defense Foundation — also filed similar lawsuits.

At the time of his initial court filings, Mitchell also had a pending nomination by President Donald Trump to serve as chair of the Administrative Conference of the United States, a federal agency dedicated to improving government administration. Tapping Mitchell, a former visiting professor at Stanford Law School and before that the Texas solicitor general, to lead the nonpartisan agency rankled some, as he had a long conservative legal record. (Mitchell’s nomination, which was not approved by the full Senate, was returned to the White House at the end of the last Congress, and he was not renominated this year.)

Mitchell’s law firm that brought the anti-union lawsuits, Mitchell Law PLLC, was registered in June 2018 — the same month as the Janus ruling. A month later, Noam Scheiber of the New York Times looked at Mitchell’s involvement in the lawsuits, writing that it suggested “a well-coordinated effort.” Mitchell declined Scheiber’s request to discuss the matter, citing his pending nomination “and my desire not to draw attention to the lawsuits.” Nobody knew who funded the work of Mitchell Law.

Not for lack of trying. Also in July 2018, Sen. Sheldon Whitehouse, D-R.I., who sits on the Senate Judiciary Committee, sent a letter to Mitchell, expressing his concern that the lawyer might be part of the same “coordinated, covert, and well-funded” effort to crush public-sector unions that led to the Janus ruling. Whitehouse requested, among other things, a list of all “persons or entities that have provided funding for or have a financial interest, including contingency interests” in the outcome of his post-Janus lawsuits, as well as details on how he identified plaintiffs for his suits.

In his response letter, Mitchell wrote that he “can assure you that I am not part of any ‘campaign’ or coordinated effort to litigate against public employee unions.” He claimed that the idea to “bring these lawsuits was entirely my own, and it was not made in conjunction or coordination with the Janus litigants or any of the entities that you mention in your letter.” He declined to share who was funding the litigation, citing attorney-client and “attorney-work product” privilege, but insisted that there was nothing covert about his efforts.

Thirteen months later, Mitchell had to file a rare disclosure form, providing information about his lawsuits that he’d never before had to share publicly. This was thanks to a rule in the U.S. District Court for the Northern District of California that requires mandatory disclosure of third-party funding agreements for class-action lawsuits.

In a filing dated August 13, 2019, Mitchell disclosed that “Juris Capital LLC has provided a non-recourse loan” to his law firm and that the “loan is to be repaid with the proceeds that Michell Law PLLC receives from any of the approximately 20 class-action lawsuits that the firm has brought against public-sector unions in the wake of Janus, including this case.” In sum, he concluded, “Juris Capital LLC therefore has a ‘financial interest in the subject matter in controversy.’”

Juris Capital is a decade-old privately held litigation finance firm incorporated in Chicago. Headed by David Desser, a self-described “pioneer in the commercial litigation finance industry,” Juris is one of just a few litigation finance firms in the U.S that provide upfront funding for pending litigation and take a cut of the plaintiff’s settlement or jury award. Desser once told the New York Times that overall, “our returns are well in excess of 20 percent per year” and that “we’re certainly beating the market.” While Juris is not required to identify its funders, media reports have previously described it as “backed by two hedge funds” and “a group of dedicated investors.”

Randi Weingarten, president of the American Federation of Teachers, blasted Juris for hiding its donors.

“While labor unions are forced to publicly disclose nearly every financial transaction they make, those plotting our demise hide behind front groups to plow dark money into bad-faith lawsuits that tie up union resources and hurt working people,” she told The Intercept. “It’s well past time that Juris is exposed for what it is: a dark-money vehicle trying to deny workers a voice at work and in our democracy.”

The AFT lost 84,500 agency-fee payers immediately after the Janus ruling, though it added another 88,000 members between November 2017 and November 2018. Many conservative groups have been running campaigns since June 2018 encouraging public-sector union members to disaffiliate altogether.

In 2010, Desser described his firm’s approach like this: “We are cherry-picking the absolute best cases with a fact pattern that we can deconstruct. We’re not interested in winning 1 out of 10 like in the venture capital world, where you look for that home run. … We want to win 7 out of 10, with doubles or triples on our money.” Desser did not return The Intercept’s requests for comment.

So far, the wave of post-Janus lawsuits, both those led by Mitchell and those led by conservative legal foundations, have not yet proved successful, as trial courts across the country have unanimously accepted unions’ arguments in roughly 25 cases that they were acting in good faith prior to Janus and therefore, should not be held responsible for funding the agency fees charged prior to last year’s Supreme Court decision. In some cases though, unions have settled rather than take all the legal challenges through court. A spokesperson for the National Right to Work Foundation told Bloomberg Law in late November that the organization has settled 10 cases and recovered tens of thousands of dollars in agency fees.

While unions have so far had success in the lower courts, the post-Janus litigation is now moving onto the appellate level, where their fortunes could change. In November, the U.S. Court of Appeals for the 7th Circuit became the first federal appeals court to endorse this “good-faith” argument in favor of unions, but six more appellate courts are set to decide on the issue soon. As Robert Iafolla noted recently in Bloomberg Law, “A single circuit ruling that rejects [this argument] would create a split that may pave the way for the issue to reach the Supreme Court.”

“It’s well past time that Juris is exposed for what it is: a dark-money vehicle trying to deny workers a voice at work and in our democracy.”

Another possibility — though this, too, would be unusual — is that the lawsuits are being waged primarily to drain union coffers in defense. “Juris and others know that if you entangle unions in endless litigation, you can begin to starve our resources,” Weingarten of the AFT said. From this perspective, it’s a win-win for the plaintiffs — either they win and the investors take home profits, or they lose but the unions are still on the hook for hundreds of thousands of dollars in legal defense fees. One example lawyers point to of this sort of strategy is billionaire investor Peter Thiel backing a series of lawsuits against Gawker Media, including a case brought by Hulk Hogan, which ultimately bankrupted the company. Thiel described his investments as “one of my greater philanthropic things that I’ve done.”

Gary Chodes, who has worked in the litigation finance world for the last 15 years, told The Intercept that it would be really difficult to find out who was funding the post-Janus cases, though he has indeed seen some “politically oriented” lawsuits over the years. For example, he said, conservative-leaning think tanks supported Texas ranchers in lawsuits in which local governments used eminent domain to take away cattle ranchers’ water rights.

“Are those cases that will generate a lot of interest from the legal funding industry? No, they’re probably not economical winners,” he said. “But they’re important philosophical battles.”

Will Baude, a libertarian law professor who defended union agency fees as constitutional, told the New York Times that he would expect the Supreme Court to be less sympathetic to “good-faith” defenses than lower courts. “If I were the unions, I’d be really nervous,” he said.

Some of the post-Janus cases are also challenging the legal principle of exclusive representation, in which a union represents all workers in a unit if a majority of the unit endorses it. The majority rule principle is written into the National Labor Relations Act, and Catherine Fisk, an expert on labor law at the University of California, Berkeley told The Intercept that it would be “an extraordinary feat of judicial activism” if the Supreme Court struck that down.

Scott Barton, a spokesperson for Pacific Legal Foundation, told The Intercept that the law firm filed one post-Janus case in California this past summer but “have had no involvement with Jonathan Mitchell or his cases.” Lisa Gates, a spokesperson for the Buckeye Institute, told The Intercept that the think tank is involved in four cases (two in Ohio, one in Minnesota, and one in Maine) and “are not working with Jonathan Mitchell on any cases.” A spokesperson from the National Right to Work Legal Defense Foundation did not return requests for comment, though Mitchell told Whitehouse in 2018 that he was not working with them.

Asked about Juris Capital and whether he believes that Mitchell was sufficiently forthright during his nomination process, Whitehouse told The Intercept, “Jonathan Mitchell has a thriving anti-union law practice that appears to be an arm of the corporate donor campaign that gave us Janus v. AFSCME. The corporate interests behind that anti-worker campaign don’t want the public to see what they’re up to, but nominees for important federal posts need to tell the truth to Congress.”