Tantrum and Theater: Trump’s Desperation After Election Loss Isn’t Yet a Coup

Experts say Trump’s lies on election fraud, and personnel shifts at the Pentagon, don’t amount to a coup but there’s danger ahead. 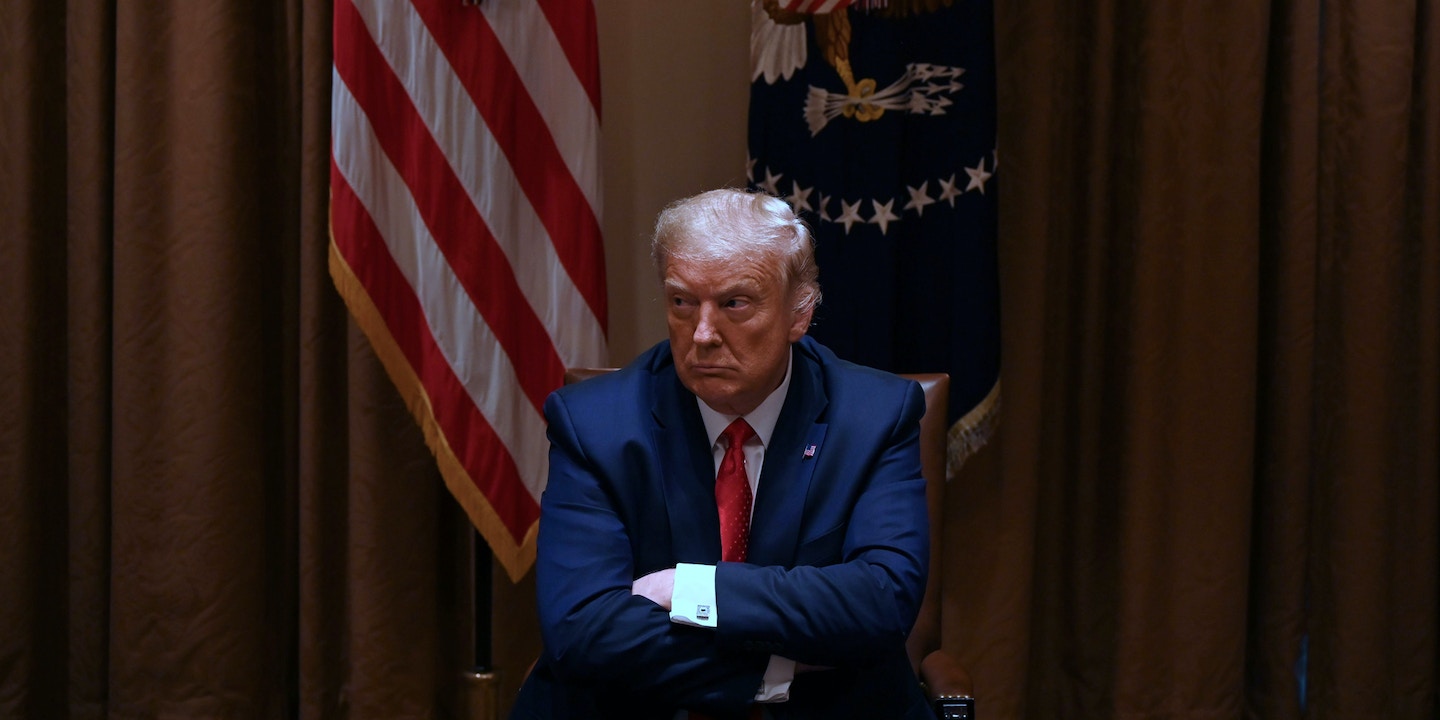 For all his many faults, George Washington never attempted to install himself as an American king.  After two terms as the first president of the United States, he refused to run a third time and, in his 1796 farewell address, warned that hyperpartisanship could imperil democracy. The outgoing commander in chief warned that “cunning, ambitious, and unprincipled men will be enabled to subvert the power of the people and to usurp for themselves the reins of government, destroying afterwards the very engines which have lifted them to unjust dominion.”

Washington wasn’t the first to use the phrase “unjust dominion.” In the 17th century, theologian John Owen wrote that there were only two ways to attain it: “deceit and force.”  Two and a quarter centuries after Washington left office, increasing numbers of Americans, especially among the pundit class, are worried that Washington’s current successor will use deceit and force to usurp the reins of government, carrying out a coup to illegitimately hold on to his office.

Earlier this year, when a group of more than 100 former national security officials, politicos, and other experts war-gamed election and transition scenarios, almost every one ended with street violence and a political crisis that pushed America’s democracy to the brink. In one particularly dire what-if, President Donald J. Trump had to be removed from the White House by the Secret Service — but only after destroying documents and pardoning himself. Is it far-fetched? Maybe. But you can at least imagine it, can’t you?

For the last four years, Trump has regularly undermined democratic values at home and abroad, embracing dictators and demagogues, attacking freedom of speech, flouting national and international laws, levying baseless accusations of treason and endorsing violence, assailing the independence of the judiciary, undermining the right to vote and the integrity of U.S. elections, refusing to commit to a peaceful transition of power, while undermining freedom of the press and casting reporters as enemies of the people, further eroding democracy in a nation that has long been challenged by, and failed to live up to, its founding principles.

This month, Trump has further upped the ante. After multiple news outlets declared Joe Biden the winner of the 2020 presidential election, the president not only refused to concede but began making repeated and baseless claims of his own victory and widespread vote-rigging in favor of his opponent. Trump has also advocated a grab bag of authoritarian actions from entreating the Supreme Court to prematurely stop the vote count, apparently demanding election officials do the same, and launching legally dubious lawsuits in the same vein, while advancing baseless claims that there’s a means to invalidate counted ballots. These latter moonshot legal gambits may be less about overturning the election results and more about sowing chaos, drawing out the process, and casting the election into doubt in the court of public opinion.

As the Trump legal team muddies the electoral waters, a Pentagon purge has emptied the Defense Department’s top ranks and ushered in a parade of Trump loyalists. Since the president “terminated” Defense Secretary Mark Esper — who had pushed back on Trump’s efforts to use U.S. troops on America’s streets — and Esper’s chief of staff Jen Stewart this week, the Pentagon’s top officials for policy and intelligence have also all been replaced. Christopher C. Miller, who just last month was “slapped down” by Mike Pompeo after the secretary of state got wind of his White House-sanctioned scheme to buy off members of the Somali terror group al-Shabab, is now the acting defense secretary. Miller’s new chief of staff is Kash Patel, who signed off on the hare-brained Shabab plan as a senior official at the National Security Council, traveled extensively with Trump during the final leg of the presidential campaign, and previously worked to discredit the probe into Russian interference in the 2016 U.S. presidential election when he was an aide to Rep. Devin Nunes, the top Republican on the House Intelligence Committee and an outspoken defender of the president.

After playing musical chairs in one administration post after another, and becoming enmeshed in the uproar surrounding Nunes’s efforts to bolster the president’s unfounded claims that his Trump Tower phones had been wiretapped by the Obama administration, Ezra Cohen-Watnick, a protégé of Trump’s first national security adviser Michael Flynn (a convicted felon who pleaded guilty to lying to FBI investigators about his communications with the Russian ambassador), became the new undersecretary of defense for intelligence.

The job of the undersecretary for policy, the third highest Defense Department post, is now in the hands of Anthony Tata, a former Fox News commentator and staunch Trump supporter who couldn’t manage to secure Senate confirmation for the job after calling Barack Obama a “terrorist leader.” It’s notable that last year, Tata co-wrote an op-ed for Fox News advocating the privatization of the American wars in Afghanistan and Syria by forming a for-profit corps of multinational mercenaries. His co-author was Erik Prince, one of the Trump administration’s top informal national security advisers, the brother of Education Secretary Betsy DeVos, and former head of security contracting firm Blackwater.

All of this has fueled fears that Trump has packed the Pentagon for a putsch — that Trump is carrying out a “coup in plain sight.” But is he really? First off, experts will tell you that a sitting president cannot carry out a coup. As Erica De Bruin, an assistant professor of government at Hamilton College and author of “How to Prevent Coups” recently wrote, “a coup attempt involves an illegal, overt effort by civilian or military elites to remove a sitting executive from power.” What Trump could attempt is known as an “autogolpe,” which typically involves leaders remaining in office beyond their term by suspending the Constitution, shuttering the courts, and ruling by fiat with the acquiesce of the military.

Semantics aside, most experts don’t believe we’ve entered coup territory. “What we’re seeing right now is a combination of political theater and typical Trumpian toddler tantrum behavior, rather than an imminent threat to democracy or a coup,” Rosa Brooks, a Georgetown University law professor and Department of Defense official during the Obama administration told The Intercept.

Brooks, who earlier this year led the group of more than 100 experts — Republicans, Democrats, civil servants, media experts, pollsters, and strategists — in scenarios examining risks to a peaceful transition of power, said that the results of this election were more akin to their projections of a robust Biden victory and hence made it far more difficult for Trump to illegitimately hold on to his office. “Biden’s win was just too big,” she said. “It’s hard to see them getting the departments and agencies at DoD to go along.”

John Chin, research coordinator for the Center for International Relations and Politics at Carnegie Mellon University and co-author of the forthcoming “Historical Dictionary of Modern Coups d’Etat,” was of a similar mind. “From what I’ve seen so far, nothing reaches the level of what I would call a coup, a coup attempt, or, more precisely, an autogolpe by President Trump,” he said. “I just don’t see Trump having that level of support within the military or sufficient backing in the courts to pull off the moves needed to stay in power.”

Chin, who along with colleagues has assembled a one-of-a-kind dataset identifying all military and nonmilitary coup attempts since World War II, explained that the secret to a successful coup was a late-night, quick strike in which legislatures and courts are shuttered or sidelined and opposition officials are arrested. You don’t telegraph your plans. You don’t drag it out. Only the most incompetent of coup-makers would proceed in the current Trumpian fashion. “If, in fact, President Trump were trying to pull off an autogolpe, it’s extremely poorly executed. He’s going about it in all the wrong ways. This is not how you do it,” said Chin.

Anyone who has spent time in nations with undemocratic governments and politicized militaries, where the rule of law is more theoretical than actual, knows how perilous the situation can be. Anyone who has witnessed civil wars or partisan conflicts firsthand knows how quickly the routine can become the unthinkable, how your military or even your neighbors might turn on you overnight. I’ve witnessed such bloodletting up close. I’ve seen the shock in the eyes of people who never believed it could happen in their village, in their country; people didn’t realize they were at risk until men came screaming out the darkness with machetes or Kalashnikovs.

George Washington knew well the type of war that pits neighbor against neighbor. After all, he rebelled against king and country and fought loyalists who saw him as a traitor. Washington also ordered the “total destruction and devastation” of entire villages, advising that troops operating in “Indian Country” ought to “lay waste all the settlements around with instructions to do it in the most effectual manner, that the country may not be merely overrun but destroyed.” Perhaps that’s why he worried about empowering “cunning, ambitious, and unprincipled men.” He knew just what emboldened and armed men are capable of.

Brooks granted that if, a month from now, the president and his Republican allies still refused to concede, prompting mass demonstrations, there could be a scenario in which Trump might attempt to “use maximum coercive force against protesters,” leading to a cascade of violent escalations. It’s precisely at these moments that democracies can go off the rails.

So when, exactly, would we need to worry? If Trump’s desperate tweets and lawsuits fail, he will be faced with a stark choice: going out with a whimper of sore-loser tweets or attempting to send armed federal officers into the streets and calling out supporters who are currently standing back and standing by. “At the end of the day, if he wants to stay in power, he either has to get the courts to side with him or he’ll have to get the support of people with guns,” said Chin. “The [Defense Department] doesn’t see its role as propping up this or any president, but Trump has mobilized other security forces — as he did against Black Lives Matters protests this summer. If there’s a reprise of those types of deployments or he gets armed supporters to back him, that would be quite troubling.”

In other words, keep your eyes on the streets, especially if mass demonstrations begin to occur around the country.

To this point, if he’s actually trying to conduct an autogolpe, Trump has bungled it as badly as any fiasco of the last four years. But we’re not out of the woods yet. “A nightmare scenario could still happen,” Chin warned. “Between now and January, we’re still in a heightened danger zone.”