New Jersey has sued Solvay Specialty Polymers over its refusal to release secret studies of its PFAS chemicals. 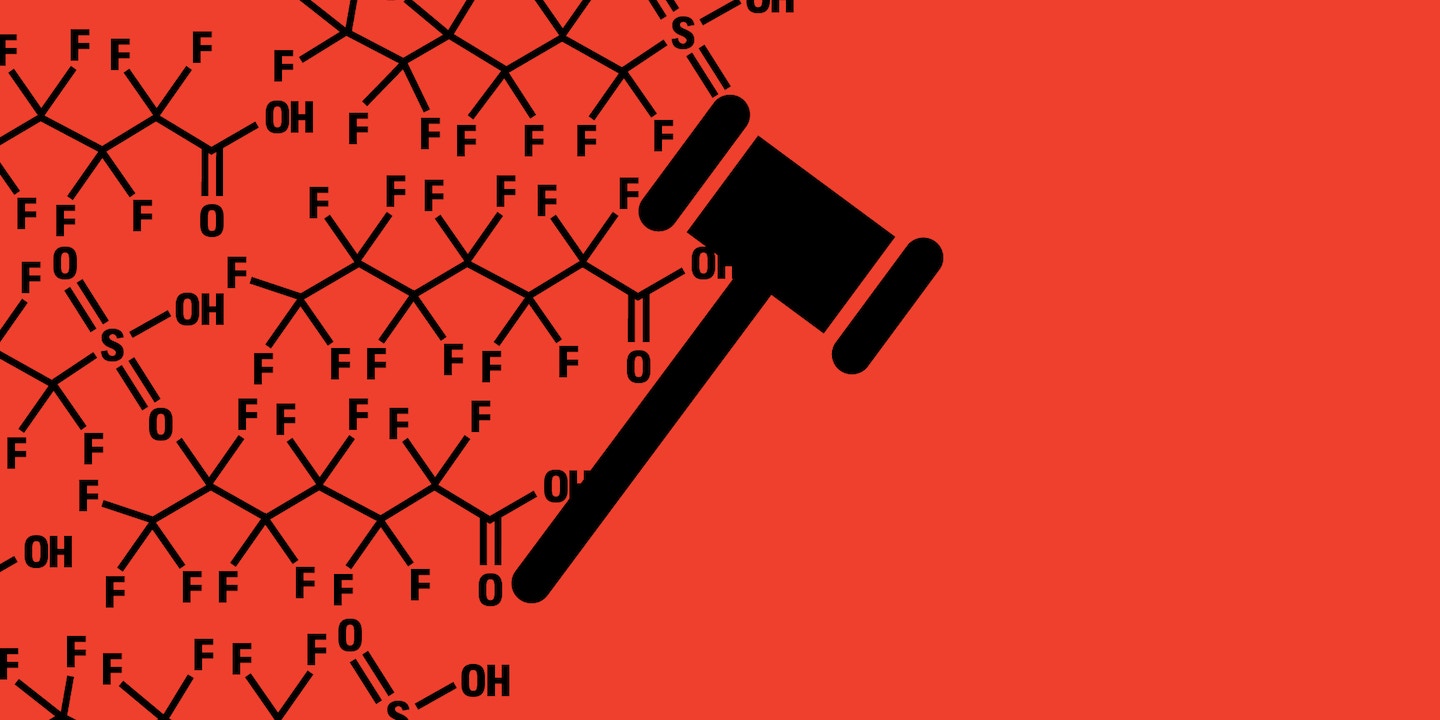 New Jersey is battling the chemical company Solvay Specialty Polymers over critical information about a recently identified group of PFAS compounds. The company has provided the New Jersey Department of Environmental Protection with studies showing that the chemicals, which it has released near its plant in West Deptford, are toxic. But Solvay has forbidden the state agency from sharing the details of the chemicals’ effects on health and the environment on the grounds that they are confidential business information.

On November 10, the NJDEP sued Solvay over the PFAS contamination, charging the chemical manufacturer with violating multiple environmental laws by releasing the toxic industrial compounds into soil, water, and air near the plant. The suit also demanded that the company allow the state agency to release information about the newly discovered chemicals’ effects on health and the environment.

Solvay had previously used other PFAS compounds, including PFOA and a molecule called PFNA, at its South Jersey plant. By 2010, the company stopped using those compounds, which remain in the body for years and are associated with multiple health effects, though it soon became clear that they had contaminated local drinking water. New Jersey has since regulated both compounds, setting among the most stringent safety levels in the country.

According to the recently filed suit, “Solvay has used — and continues to use — ‘replacement’ PFAS products at the Site, the identities of which it claims are confidential.” In April 2019, the company admitted to having used the unregulated chemicals for the past two decades, according to the suit. Solvay is also refusing to release information to the public about the basic structures of these unregulated replacement PFAS compounds as well as emissions information, safety data sheets, and studies that show the environmental and health risks they pose, arguing that they’re proprietary information.

In an emailed statement, Solvay said, “We have made considerable effort to engage in good faith with the NJDEP, including offering multiple proposals to launch a cooperative, expedited, and scientifically reliable investigation of our current process aids. We are surprised and disappointed that rather than pursue this expedited and cooperative route, NJDEP has decided to take the litigation path. We intend to defend ourselves vigorously against NJDEP’s inaccurate, overly broad, and meritless allegations. We remain committed to completing our investigation and remediation of PFAS impacts scientifically attributable to our West Deptford facility in compliance with applicable laws and regulations.”

The company did not respond to specific questions about its claims that toxicity information should be withheld from the public.

People living in the area have good reason to be concerned about the chemicals. In June, an article in the peer-reviewed journal Science showed that the eight variations on the PFAS molecules were in the soil in New Jersey. Based on complex mapping, the authors — scientists from the U.S. Environmental Protection Agency and the NJDEP — showed that the soil contamination had spread far beyond the factory.

According to emails released under New Jersey’s open records law, Solvay gave the NJDEP two studies showing that the compounds are toxic. A June 25, 2019, email includes a description by a New Jersey toxicologist of the two studies, which found that Solvay’s PFAS chemicals cause liver damage in rats. Both studies showed that rats were affected by very low doses of the compound. The studies also suggest “a potential for human toxicity,” as NJDEP environmental specialist Erica Bergman wrote in the email.

The European Chemicals Agency also has scant information on the chemicals. The regulatory body describes one of the compounds in the group as being fatal if swallowed or brought in contact with skin, causing severe skin burns or eye damage or liver damage through prolonged or repeated exposure, and being toxic to aquatic life with “long-lasting effects.” But the European agency doesn’t include the studies on which these conclusions are based.

Whatever information the NJDEP possesses has led that agency to suggest that the “replacement” chemicals may be even more toxic than the original compounds, as it states in the recent lawsuit. After DuPont agreed to phase out its use of PFOA, which was based on an eight-carbon chain molecule, it then developed GenX, based on a six-carbon chain, and initially claimed that its replacement molecule was “more sustainable.” Other companies also began using shorter-chain PFAS compounds after it became clear that PFOA and other relatively long-chain molecules were extremely toxic and remained in the body for years. But the molecules recently found in the soil near the Solvay plant are longer than those of GenX — which turned out to be more toxic than PFOA in certain ways. The length of the molecules suggest that the Solvay compounds may be especially dangerous, according to the suit.

Whatever information NJDEP possesses has led that agency to suggest that the “replacement” chemicals may be even more toxic than the original compounds.

Although the very brief summary of the studies has become public, the state agency has refused to release the studies themselves or datasheets that summarize the hazards of the chemicals, which are sometimes known as CIPFPECAs. The Intercept asked the NJDEP for any information documenting the health and environmental effects of the recently discovered chemicals in mid-June. Two weeks later, spokesperson Larry Hajna sent an email acknowledging that “Solvay has conducted toxicology studies for CIPFPECAs and provided them to the DEP,” but he declined to provide the studies because the company provided them “as confidential business information that is not releasable to the public.” In October, the NJDEP denied an open records request for the studies by The Intercept “due to the circumstances surrounding the ongoing COVID-19 pandemic.”

New Jersey law gives the NJDEP authority to challenge confidentiality claims, but the agency did not respond to a question from The Intercept about whether it had done so. Federal law forbids companies from claiming such studies as confidential business information.

While both the company and the state possess detailed information about how the chemicals affect health, the people most likely to suffer physical consequences from the contamination — the residents of West Deptford — do not.

“It’s really important to know if this stuff builds up in their blood and whether it has health effects,” said Tracy Carluccio, deputy director of Delaware Riverkeeper Network, who has been working to address PFAS contamination in New Jersey since 2005. “And the people living here don’t know.”

The company’s refusal to release the information about the chemicals’ health and environmental effects could deepen distrust among West Deptford residents that first blossomed in response to the 2013 discovery that Solvay, a trusted local employer, had contaminated local drinking water, according to Carluccio. “It was a traumatic awakening for people,” she said. “It was such a shock — people felt this was a responsible industry and then they’ve find out they’ve been poisoned.”

In its statement, Solvay wrote, “As a science company with sustainability at our core, Solvay meets applicable legal standards with respect to health, safety and the environment. We care deeply about the wellbeing of our employees and the communities in which we operate, and would strongly reject any allegations to the contrary.”

The suit is just the latest salvo in a legal battle between the company and the state. In March 2019, New Jersey sued Solvay along with four other companies, including DuPont and 3M, demanding that the companies pay the costs associated with cleaning up the PFAS chemicals they emitted into the environment. But Solvay has not complied with all the state’s requests, according to the most recent lawsuit.

In October, a coalition of businesses and trade groups, including 3M and the Chemistry Council of New Jersey, filed a legal challenge to restrictions the state had placed on PFAS, calling them “regulatory overreach.” While the membership of the Chemical Council of New Jersey is not public — and Solvay didn’t respond to a question about whether it belongs to the group — Chuck Jones, the site manager of the company’s West Deptford plant, is on the industry group’s board of directors. In the suit, the plaintiffs argue that compliance with New Jersey’s PFAS rules “will entail enormous additional costs.”

In the November suit, the state also noted that Solvay had “failed to provide” analytical standards for the chemicals. These official samples allow scientists to definitively confirm the presence of chemicals in the environment. “Without them we can’t give estimates or measurements of the concentrations of compounds in the water,” said P. Lee Ferguson, associate professor of civil and environmental engineering at Duke University. “And concentrations are critical for understanding health impacts.”

While withholding analytical samples makes the work of environmental scientists considerably more difficult, it is not unusual for companies to do so. “Unless it’s a PR benefit for them, they don’t have an incentive to work with the researchers,” said Ferguson. Residents of Alessandria, Italy, where another Solvay plant is located, have identified some of the same replacement PFAS compounds detected in New Jersey and have also reported difficulties obtaining an analytic standard for at least one of them, according to Viola Cereda, who lives in the area and is a member of a local group concerned about the contamination.

The work of environmental toxicologists is also complicated by being unable to access the science produced by industry. “Not having information on some of the toxicity-related testing that companies have done puts us as researchers behind the eight ball,” said Jamie DeWitt, an associate professor of pharmacology and toxicology at East Carolina University whose work shows that GenX suppresses immune response in mice. If testing done by companies was made public, “I could know what concentration is toxic, which would allow me to better design my experiments,” said DeWitt. “Without that information, I end up wasting my time, my students’ time, money, and animals’ lives.”

For chemical companies, the delay may be the point. Cat-and-mouse games with regulators slow the process of limiting chemicals, giving their manufacturers more time to profit from individual compounds before they are forced off the market. If New Jersey has its way, however, Solvay’s days of denial and secrecy are numbered.