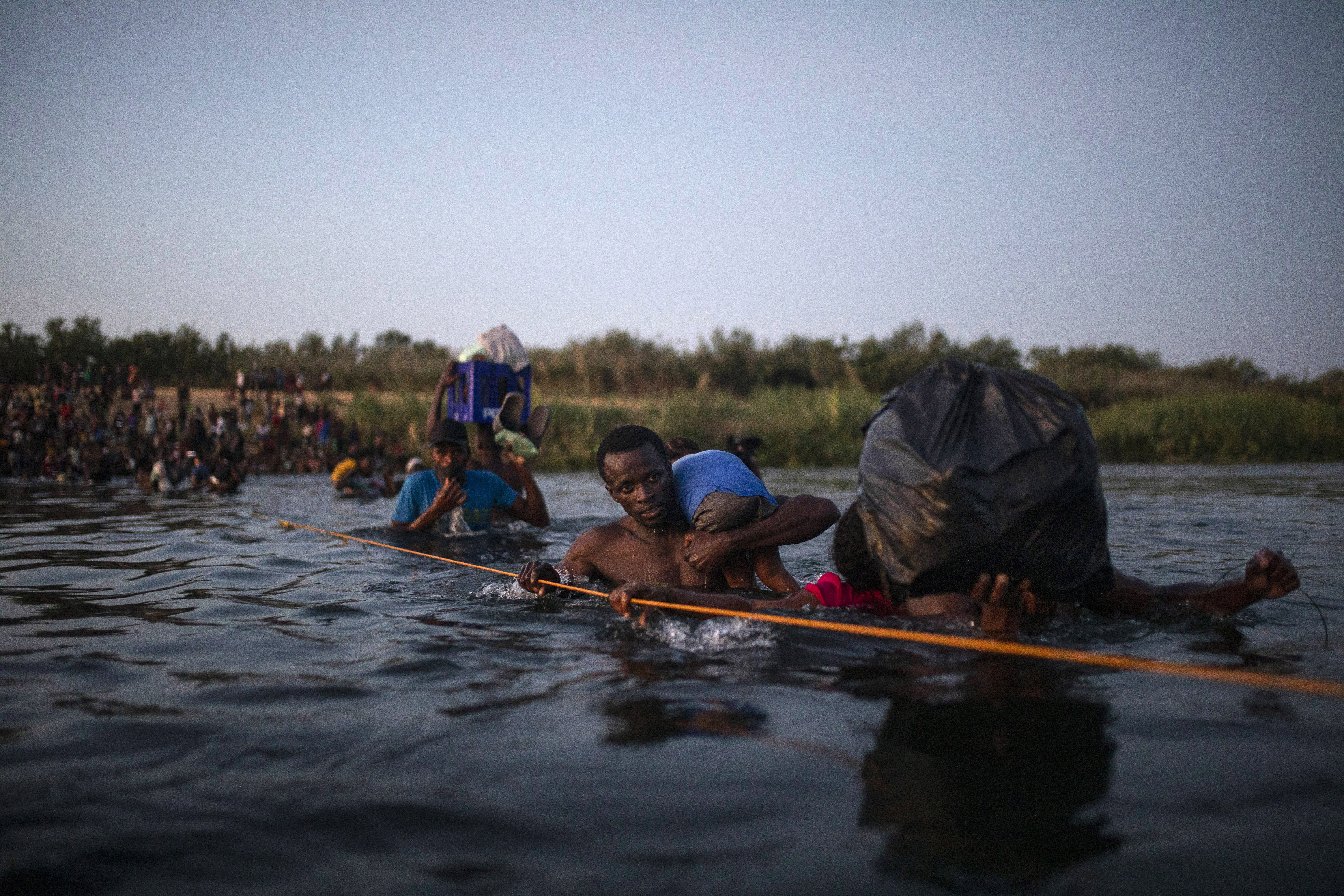 Migrants, many from Haiti, wade across the Rio Grande from Del Rio, Texas, to return to Ciudad Acuña, Mexico, late Sunday, Sept. 19, 2021, to avoid deportation to Haiti from the U.S.

Just four months ago, the Department of Homeland Security designated Haiti for temporary protected status. The rare designation applies to immigrants in the United States who are temporarily unable to safely return to their home country because of conditions of extreme political upheaval, conflict, or natural disasters. The U.S. government thus asserted, in no uncertain terms, that Haiti was not a safe place. Temporary protected status was extended and expanded for Haitians just five weeks ago.

Yet in the last 24 hours, 320 Haitians were placed on planes by the Biden administration and expelled back to Haiti, having been removed from the huge border camp that has amassed around a bridge in Del Rio, Texas. Six more flights are expected to land in Haiti on Tuesday, and then as many as 10 per day from Wednesday onward. Around 14,000 Haitians will be expelled from the U.S. over the coming three weeks — almost the exact number currently gathered at the Del Rio encampment.

Around 14,000 Haitians will be expelled from the U.S. over the coming three weeks — almost the exact number currently gathered at the Del Rio encampment.

The Biden administration is expelling thousands of people to a country officially recognized as unsafe for repatriation. It is a deportation operation of scale and speed not seen in decades. And it gives the lie to any notion that President Joe Biden’s border regime is kinder than that of former President Donald Trump.

Trump and his ghoulish allies framed their brutal border policies in unabashed racist rhetoric and white supremacist fearmongering. Like Presidents Bill Clinton and Barack Obama before him, Biden shrouds his anti-immigrant policies in empty liberal overtures. The necropolitical border logics are nonetheless the same; the suffering of those denied safety in this country — which could well provide it — is no different, whether enforced by an alleged “friend” to immigrants or an explicit white nationalist.

“The Biden Administration doesn’t get to be both an ally of immigrant communities and an active oppressor,” wrote the UndocuBlack Network, a community of currently and formerly undocumented Black advocates, on Twitter. “And the daughter of immigrants Kamala” — Harris, the vice president — “doesn’t get to use her immigrant ties to get our support for her election but then play bystander to our plight.”

UndocuBlack ended the tweet with the hashtag #BidenAlsoDeports, which has been gaining traction among those trying to draw attention to the brutality of the administration’s mass deportation of Haitians.

Longtime immigrant rights activists will be unsurprised by the fact of a Democratic administration’s inhumanity when it comes to border rule. Genocidal policies of so-called deterrence in the name of border “security” are a rare point of bipartisan agreement, whether or not Democrats admit it. Foul Trumpian treatment of immigrants at the border was cited as key proof of his administration’s racist cruelty. The same, then, must apply to Biden’s actions. A U.S. Border Patrol agent on horseback tries to stop a Haitian migrant from entering an encampment on the banks of the Rio Grande near the international bridge in Del Rio, Texas, on Sept. 19, 2021.

Photographs taken over the weekend show U.S. Border Patrol agents on horseback violently grabbing Haitian migrants attempting to join the Del Rio encampment. This, the Biden administration claims, is in the name of safety: The mass deportations have been authorized under the Centers for Disease Control and Prevention’s Title 42, which enables expedited deportations in the name of public health during the Covid-19 pandemic. Under Trump, nearly half a million people were removed under the law; the Biden administration has already used it to deport nearly 700,000.

Its use against migrants at the southern border sends a clear and vile message as to whom the U.S. deems to be the public, deserving of health and safety. Under Title 42 — in the name of safety, that is — those being rounded up and flown to Haiti were given no option to apply for asylum or temporary protection status.

It is worth emphasizing, too, that the majority of deportees have not lived in Haiti for many years, having left to find work in South America after a catastrophic hurricane devastated their home country in 2010. Struggling to find enough work to survive in South America, thousands risked perilous journeys to the U.S. border, only to be summarily removed — to Haiti.

“I’m scared,” Gary Monplaisir, a 26-year-old Haitian man, who had traveled from Chile to the U.S. border with his wife and 5-year-old daughter and who now faces imminent removal to Haiti, told The Associated Press. “I don’t have a plan.” He has not lived in Haiti for four years, and reaching family in Port-au-Prince would require crossing a gang-controlled area, where killings are common.

Secretary of Homeland Security Alejandro Mayorkas announced the new designation of Haiti for temporary protected status in May. “Haiti is currently experiencing serious security concerns, social unrest, an increase in human rights abuses, crippling poverty, and lack of basic resources, which are exacerbated by the Covid-19 pandemic,” he said. “After careful consideration, we determined that we must do what we can to support Haitian nationals in the United States until conditions in Haiti improve so they may safely return home.”

Conditions have not improved, and yet a mass deportation of historic size to the beleaguered Caribbean nation continues at extraordinary pace. Haiti remains beset by the aftermath of another devastating hurricane, gang warfare, and an acute political crisis — for which centuries of white supremacist U.S. oppression and intervention bares considerable historic blame. As The Intercept’s Ryan Devereaux reported, the July assassination of Haiti’s President Jovenel Moïse, which plunged the country into political disarray, involved U.S.-trained Colombian mercenaries. It is another great, unbroken American tradition: to destabilize foreign nations and then forego all obligations to the mass migrations that the U.S. helped produce.

“We are in utter disbelief that the Biden Administration would deport Haitians now. Hours after the 7.2 magnitude earthquake, President Joe Biden released a statement saying that the United States was a ‘friend’ of Haiti. A ‘friend’ does not continuously inflict pain on another friend,” Guerline Jozef, co-founder and executive director of the Haitian Bridge Alliance, said in a statement. “Just one month after this devastating earthquake and storm that resulted in the deaths of over 2,200 Haitians, injured 12,000 people, damaged or destroyed 120,000 homes and displaced hundreds of thousands of people, the Administration sent a plane full of families to Haiti under Title 42, including children under the age of three, without offering them legal protection and the opportunity to file for asylum.” Last Thursday, a federal judge ruled that the government must stop using Title 42 as a grounds to expel migrants. The Biden administration is so keen to keep using the public health law and denying people’s right to seek asylum in the U.S. that it has already appealed the order. The ruling, if not overturned, gave the government two weeks before it must end the use of the law for expulsions — little wonder that the U.S. is rushing to expel as many Haitian refugees as possible at breakneck speed.

Meanwhile, the Biden administration continues to frame the mass deportations in humanitarian terms. “We are working around the clock to expeditiously move migrants out of the heat, elements, and from underneath this bridge to our processing facilities in order to quickly process and remove individuals from the United States consistent with our laws and our policies,” said Border Patrol Chief Raul Ortiz at a Sunday news conference at the Del Rio bridge. As if removal to Haiti were the only option in the face of the humanitarian crisis; as if the wealthiest nation in the world could not well accommodate millions of migrants seeking safety and a better life. Instead, exclusionary border logic prevails as if it were a transcendental truth.

There’s no doubt that the crisis at the border presents a challenge and a political minefield for Biden. The population of Del Rio is only 35,000, and the border encampment grew to nearly half that size. In such circumstances, Republican racist, paranoiac claims flourish about a “great replacement” of white Americans by brown and Black migrants. Indeed, Sen. Ted Cruz, R-Texas, was swift to take footage of the inhumane conditions at the encampment and blame Democrats for bringing migrants to the border in great and allegedly unmanageable numbers.

It is both political folly, as well as moral turpitude, for Democrats to bend even further rightward on immigration in an attempt to satiate the insatiable.

The encampment is a humanitarian disaster, but it is also a political nightmare for the Biden administration. The only option is not, however, to clear the camp through inhumane expulsions and far-right appeasement. Republicans will misleadingly frame Biden as advocating for open borders, regardless of how harsh and anti-immigrant his policies remain. It is both political folly, as well as moral turpitude, for Democrats to bend even further rightward on immigration in an attempt to satiate the insatiable.

If the political hit is coming anyway, as it is, the way forward is clear. There is no doubt that the men, women, and children gathered at the border in intolerable conditions — hungry, unsheltered, and harassed by law enforcement — should not be there. They should be swiftly aided in their entry to this country.