Crushing the tax haven racket is a big political challenge, but the steps needed are straightforward and simple. 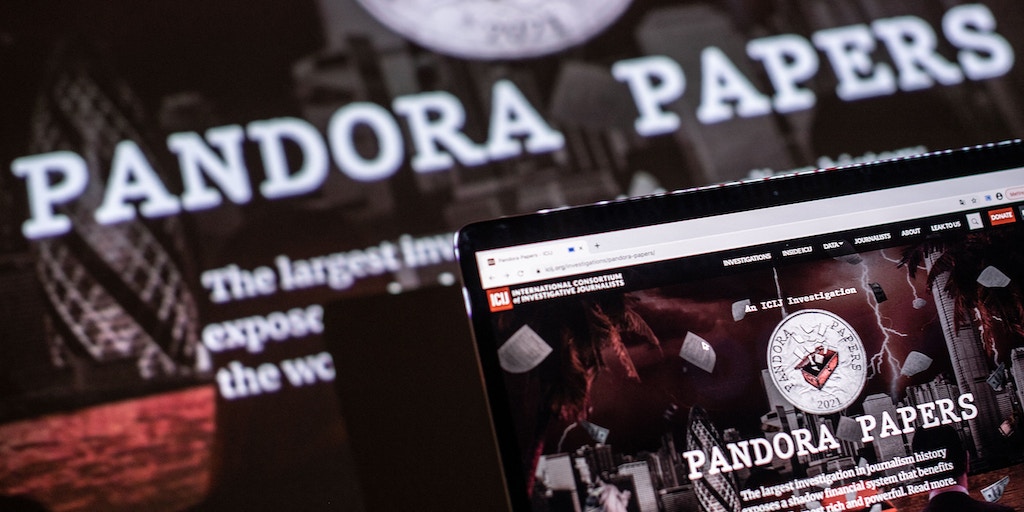 This photograph illustration shows the logo of Pandora Papers, in Lavau-sur-Loire, western France, on October 4, 2021.

This Sunday, the International Consortium of Investigative Journalists unveiled an enormous analysis of tax havens around the world based on a huge leak of documents from 14 offshore services firms. The ICIJ is calling the leaked records the “Pandora Papers.”

The investigation should be particularly enraging for ordinary citizens everywhere because it found 35 current and former world leaders who are making use of complex financial maneuvering to conceal their wealth, avoid taxes, or both.

At the same time, readers may feel some despair: The malfeasance that the ICIJ’s reporting reveals appears so byzantine that stopping it seems beyond the capacity of democratic governance. In 2004, President George W. Bush encouraged Americans to embrace this sense of futility, saying there was no point in raising taxes on the wealthy because “real rich people figure out how to dodge taxes.”

In reality, though, there is no technical reason the world of international financial secrecy and all its associated injustices could not be eliminated. The challenge is purely a political one. This doesn’t mean it’s not daunting, especially since the Pandora Papers show that the people who write the laws often are doing so not just on behalf of their wealthy patrons but also for themselves. But it does mean that no one should fall for specious claims that it’s impossible.

This is especially important now as societies worldwide split ever more grievously in two. It’s bad enough that tax havens shift the tax burden from the superrich onto everyone else. The greatest damage they cause, however, is feeding the accurate, corrosive understanding across societies that there is one set of rules for regular people and a completely different one for those ensconced at the top of the pyramid.

There is no technical reason the world of international financial secrecy and all its associated injustices could not be eliminated. The challenge is purely a political one.

For example, one especially infuriating discovery in the Pandora Papers is that former British Prime Minister Tony Blair and his wife avoided over $400,000 in taxes by buying an offshore firm that owned a London townhouse worth almost $9 million. Blair was by far the most significant prime minster of the past 40 years from the Labour Party, the counterpart to the Democrats in the U.S. There simply can’t be functional liberal politics, which asks everyone to contribute to the common good, led by people like Blair, who actively evade doing so.

To understand what can be done about offshore tax havens, it’s important to understand who uses them, and why. First, they can serve as a means for tax avoidance, which is carried out on a large scale by corporations and is generally legal (partly because corporations help write the laws). Second, there’s tax evasion, which is mostly carried out by individuals and is illegal.

The Pandora Papers are generally not about corporate tax avoidance. Ending corporate tax avoidance would require changing our current “territorial” tax system, under which corporate profits are taxed in the countries where the companies claim they were earned, to a “formulary apportionment” system, under which taxes would be assessed on less easily gamed metrics, such as sales or payroll.

Rather, the Pandora Papers revelations are about the behavior of individuals. Tax havens allow individuals to hide assets thanks to two simple attributes: The havens often do not report the assets to the relevant tax authorities, and they have strict secrecy laws that can obscure who the ultimate owners of assets are.

Gabriel Zucman, an associate professor of economics at the University of California, Berkeley, proposes several straightforward ways to address this. Zucman is one of world’s leading experts on tax havens and the author of the short, general audience book “The Hidden Wealth of Nations.”

Zucman points out that there has been progress on the first front already. The Foreign Account Tax Compliance Act, passed by Congress in 2010, imposed the U.S.’s rules on financial institutions worldwide. Under FATCA, banks in the Bermudas, Switzerland, the Cayman Islands, and every other country must search their records for accounts held by U.S. citizens and then report their income to the IRS.

FATCA’s passage created momentum for similar measures in other countries. What is needed now, Zucman says, is for this momentum to continue and for other countries, individually or collectively, to join together to require foreign banks to transmit the income of each country’s citizens to that country’s tax authorities.

However, thanks to trusts and shell corporations, financial institutions can in many cases truthfully say that they don’t know who owns the assets they hold. This problem could be dealt with by an international financial registry of exactly which individuals own which assets.

Zucman believes such a registry is “in no way utopian.” Countries already have such registries for one kind of wealth: property. And while it’s little known, there are now private registries for many other kinds of property. The Depository Trust Company keeps track of the ownership of all stock issued by U.S. companies. Euroclear France does the same for French corporate stock. Euroclear Belgium and Clearstream do so for bonds issued by U.S. companies but denominated in European currencies.

The already existing databases could plausibly be merged into one. This would require the supervision of a public institution with extensive financial expertise. But we already have one of those: the International Monetary Fund.

This would not directly solve the problem of financial obfuscation — the IMF under this scenario would only have information pointing to ownership by trusts, anonymous corporations, and the like. Untangling the various layers of secrecy would be expensive, laborious, and sometimes impossible.

The IMF should collect a 3 percent wealth tax on all stocks, bonds, mutual funds, land, and property in such a registry that would be refunded if the ultimate owners unmasked themselves.

But Zucman has a sneaky solution: The IMF should collect a 3 percent wealth tax on all stocks, bonds, mutual funds, land, and property in such a registry that would be refunded if the ultimate owners unmasked themselves.

The individuals revealed in the Pandora Papers would thus have two options: They could keep their assets secret, and thereby be eaten away by the 3 percent tax every year to the point where there was no financial advantage to utilizing tax havens, or they could reveal themselves, making their assets taxable and therefore also making tax havens pointless.

Again, this is undoubtedly a large political mountain to climb. And those who oppose financial transparency will claim that there is no way to force tax haven countries to comply. But this is simply false: The U.S. and the European Union have enormous power that they constantly wield against other nations when they wish to. Zucman calculates that France, Italy, and Germany could compel even a rich country like Switzerland to agree to any needed transparency changes by placing a tariff of 30 percent on Swiss products. This would cost Switzerland more than it takes in as a tax haven. It would also be legal under World Trade Organization rules, because that level of tariff would allow the three countries to recover approximately the same amount in tax revenues that Switzerland is costing them.

Meanwhile, there are many international public interest organizations that understand the significance of the issue and are trying to push it onto the global agenda. “This is where our missing hospitals are,” a representative for Oxfam International said in a press release, in response to the publication of the Pandora Papers. “This is where the pay-packets sit of all the extra teachers and firefighters and public servants we need. Whenever a politician or business leader claims there is ‘no money’ to pay for climate damage and innovation, for more and better jobs, for a fair post-COVID recovery, for more overseas aid, they know where to look.”

Members of Congress have only been required to disclose their finances since 1978. Until 2010, Americans could hold assets overseas that would not be reported to the IRS. A provision banning shell companies in the U.S. was recently inserted into a National Defense Authorization Act that was passed over a veto by President Donald Trump just before he was extracted from office. Financial secrets have been dragged out into the light before, and they can be again.