During Brazil’s Dictatorship, Companies Helped Suppress Democracy. Will They Do It Again?

Business interests could be decisive in the looming election between Jair Bolsonaro, Lula da Silva, and a possible “third way” candidate. 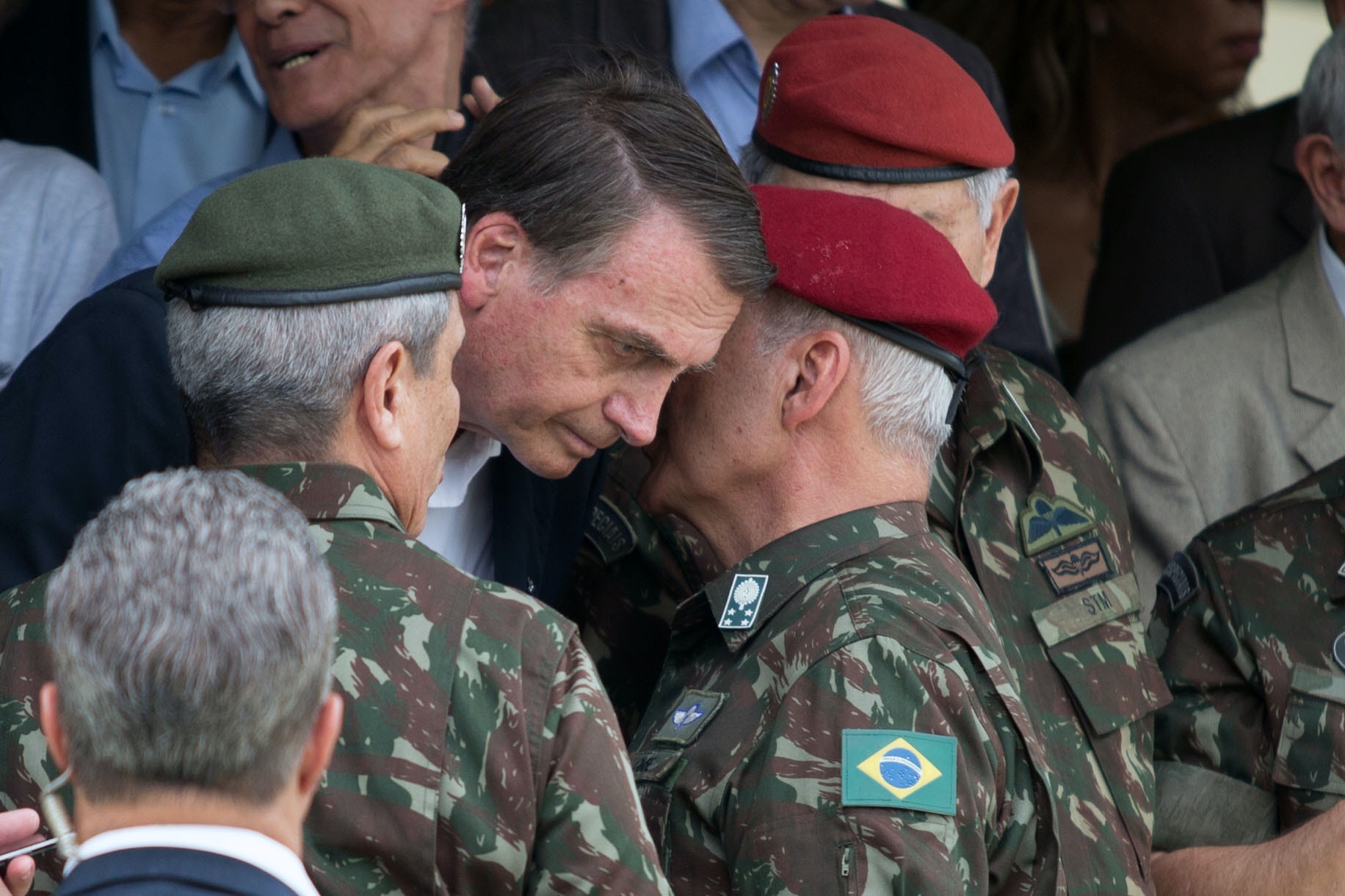 General Motors was the largest corporation in the United States on November 11, 1969, when one of its employees, retired Brazilian air force Col. Evaldo Herbert Sirin, walked into the local headquarters of the Brazilian military dictatorship’s political police force. Sirin was there to meet with an army major and the local political police boss, as well as security chiefs from American companies Chrysler and Firestone, the Netherlands’s Philips, and Germany’s Volkswagen, among others.

The group was gathering amid a backdrop of dissatisfaction among industrial workers because of wages that weren’t keeping up with galloping inflation and new anti-labor government policies. In the streets and countryside, strikes and protests shook the regime, and small bands of leftists had taken up arms. The military cracked down against its opponents with overwhelming force. It was the onset of the “Years of Lead,” the most authoritarian and bloody period of the military regime that began in 1964 and lasted until 1985.

The “working group,” as the men gathered at the local political police headquarters called themselves, was concerned about “problems” at their factories. The corporate representatives were eager to intensify the formal but clandestine collaboration between the corporations and the police to identify and neutralize any troublemakers, according to documents first published by the newspaper O Globo decades later. That day, they would establish a “coordination center” at the political police headquarters.

The November 11, 1969, meeting — notorious in the annals of history but largely forgotten in the public consciousness — was a milestone in the systematization of the repressive alliance between corporate bosses and the Brazilian generals.

In workplaces across the country, corporate security departments, run by military men who employed networks of spies on shop floors, would surveil their workers and hand over files on “subversives” — leftists and labor organizers — for the political police to handle.

Among the more than 80 corporations secretly reporting hundreds of troublemaking workers to the dictatorship’s enforcers were giant American companies.

Among the more than 80 corporations secretly reporting hundreds of troublemaking workers to the dictatorship’s enforcers were giant international and particularly American companies, including Johnson & Johnson, Caterpillar, Kodak, General Motors, Chrysler, Ford, Philips, Volkswagen, Rolls-Royce, and Mercedes-Benz, according to the Brazilian National Truth Commission established after the dictatorship.

Corporations, which also provided the initial private seed funding for another, more brutal repressive secret police force, aimed to curtail workers’ rights and restrain democracy when it got in the way of profits and power. The dictatorship, in need of investment from abroad to prop up the economy, was happy to serve the interests of foreign capital.

At least 434 people were murdered under the dictatorship, and 20,000 more were tortured, including former President Dilma Rousseff. The torture chambers were funded by corporations, including American ones, and the torturers were trained by the U.S. Army. Only one person was ever convicted for the abuses, and the ruling was only handed down this June. And only one company was formally held accountable: Volkswagen, which in 2020 admitted its wrongdoing and made a settlement agreement with prosecutors to pay millions in restitution in exchange for immunity. A man holds an image of former Brazilian President Dilma Rousseff, who was tortured during the dictatorship, as he takes part in a protest against the military coup of 1964, in Rio de Janeiro on March 31, 2019.

The unresolved bloody past hangs over Brazil as the nation ramps up for presidential elections slated to take place in October 2022.

President Jair Bolsonaro, a former paratrooper, has never hidden his longing to return to the U.S.-backed military dictatorship or his unquestioning admiration for the regime’s worst villains, like secret police chief and torturer Col. Carlos Alberto Brilhante Ustra.

The neoliberal economic agenda that accompanied Bolsonaro’s authoritarian vision was embraced by global financial elites and large swaths of the media, like the Wall Street Journal editorial page. Others were more reserved in their support. Bolsonaro quickly filled his administration with more generals, colonels, and majors than any president since re-democratization and dredged up unfinished plans from the dictatorship. Like his military predecessors, he moved to make Brazil more attractive for foreign investors. Bolsonaro’s presidency has been a three-year parade of horrors: the attrition of social spending, labor rights, real wages, democratic institutions, and essential regulations, all while hunger, unemployment, and inflation soar.

The Bolsonaro era has been a rude reminder that Brazil’s darkest moments have always been the result of multinational corporate elites aligning with the military to crush democratic movements supposedly in the name of saving democracy. The alternative, his supporters have dubiously alleged, would invite the left-leaning Workers’ Party to turn Brazil into a communist dictatorship worse than Cuba, the same story that was used to justify the 1964 coup.

The revival of a dark history represented by Bolsonaro also informs his 2022 opponent’s past. In the 1980s, Volkswagen handed the dictatorship’s police a file based on surveillance of a regional labor activist named Luiz Inácio Lula da Silva. Lula, who would go on to serve as president from 2003 to 2010, had been surveilled by the German car manufacturer and was arbitrarily arrested by the dictatorship for leading a strike. In 2018, he was again jailed under dubious circumstances on corruption charges that were subsequently vacated but prevented him from running for president in that year’s election. The 76-year-old politician is free now and again leads in the polls.

Conditions this time around are not dissimilar from those surrounding Lula’s 2002 victory. Then, Lula bolstered his reputation as a fighter for the working class and secured alliances with oligarch parties to alleviate a severe economic crisis without resorting to radical policies. Today, he again looks to forge such alliances and still maintains a loyal following among many of Brazil’s poor. The elite class, though, overwhelmingly turned its back on the Workers’ Party to support Bolsonaro in 2018 to roll back the party’s legacy of social programs and tighter regulations.

Today, Brazil’s elite is split. Some still openly or tentatively support the president, while many have abandoned him over his turn away from some neoliberal economic policies, sagging poll numbers, and internal rivalries. Among the defectors, a few are in tentative backroom negotiations with Lula, but most are instead advocating a “third way” candidate who would adhere to their neoliberal economic vision without all the baggage of Bolsonaro. As things stand, neither Bolsonaro nor this “third way” has the popularity to win a democratic election.

These elites, in almost the exact manner of their predecessors in the run-up to the 1964 coup, employ a careful language of liberalism, democracy, incremental reforms, and anti-corruption. Behind the rhetoric, though, are deeply reactionary objectives. It was a winning strategy in 2016 when it was used to impeach Rousseff on trumped-up charges, and it worked again with Operation Car Wash, the now-discredited “anti-corruption” crusade that led to Lula’s imprisonment.

There is much for the corporate interests to protect: Today, the top 1 percent owns half of Brazil’s wealth. And there are reasons — growing food insecurity and Congress’s disinterest in a populist program, for example — for those interests to be worried about what a shifting democratic wave might bring. 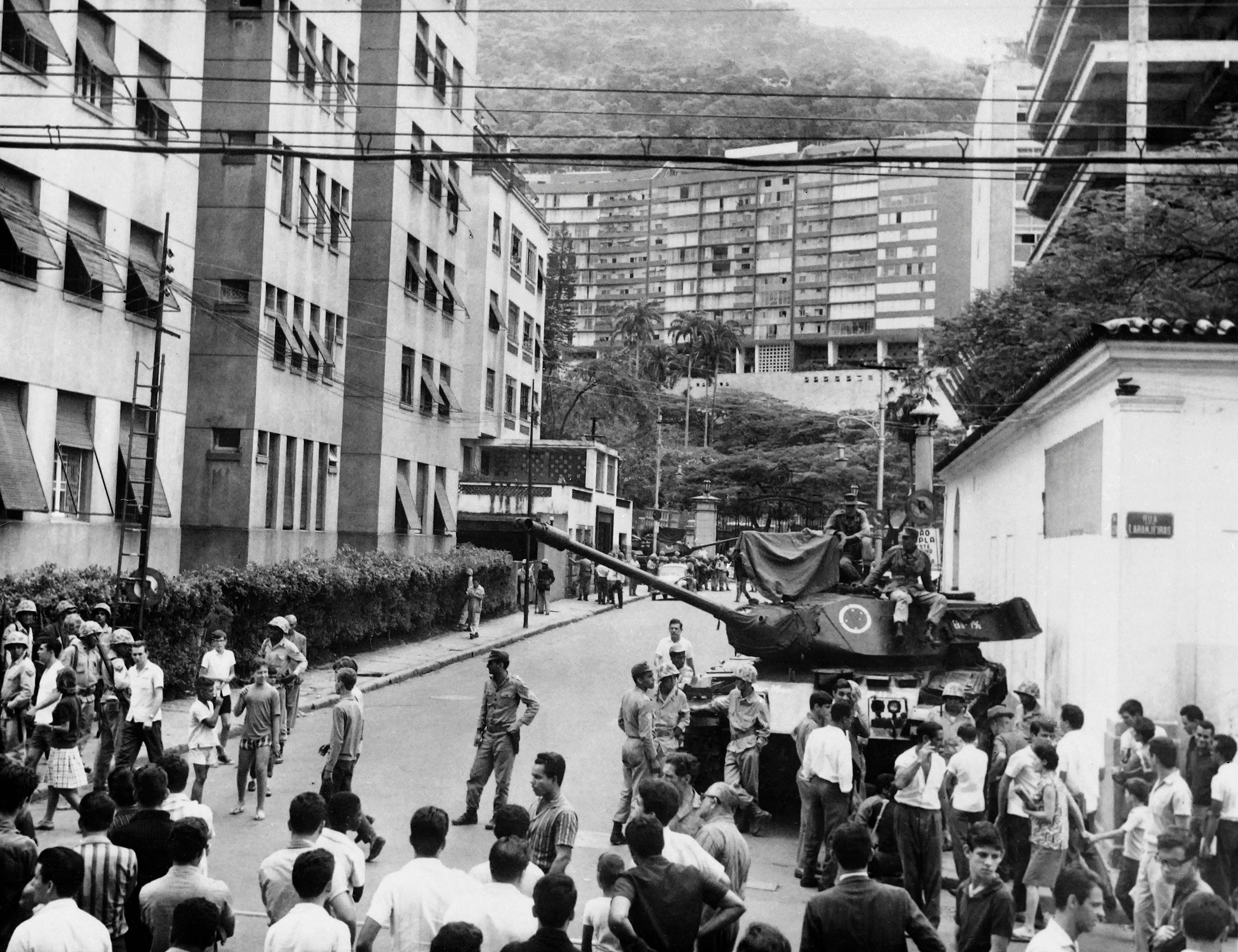 Brazilian army tanks stand in front of Laranjeiras Palace on April 1, 1964, in Rio de Janeiro during the military putsch that led to the overthrow of President João Goulart by members of the Brazilian Armed Forces and a military regime led by Humberto Castelo Branco.

In Brazil, most historians do not refer to the period from 1964 to 1985 as a “military dictatorship” but rather as a “civil-military dictatorship” — due to the leading role that domestic and multinational corporate elites played every step of the way. U.S. corporations like IBM, Shell, and Coca-Cola poured millions into far-right anti-communists nonprofits that, according to the National Truth Commission, were essential to planning and propagandizing for the coup. The corporations lobbied the U.S. government to support the coup, and it did — even going so far as to send a U.S. Navy task force loaded with supplies off the coast to support the plotters.

Brazilian elites must decide whether they want to finish the job they started in 1969 or 2002.

The 1964 coup that overthrew President João Goulart was orchestrated, with CIA help, by elites who almost certainly would have supported Bolsonaro in 2018 and today would likely be leaning toward a “third way” candidate. One such candidate — who formally joined a political party Wednesday, the first official step in a run for president — is disgraced former Car Wash Judge Sergio Moro, who put Lula in jail and then joined the Bolsonaro administration. Eventually, with his own naked political ambitions on display, Moro left the government over differences of opinion.

For years, Moro was portrayed as a superhero in “anti-corruption” street protests organized by right-wing groups with murky finances and U.S. ties that purported to be apolitical and moderate but went on to promote divisive conservative culture war issues and a radical libertarian economic agenda. The corporate-backed nonprofits behind the coup made a similar effort to originally hide their more radical goals.

Brazilian leftists, understandably, are just as hostile to Moro and anyone who supported him as they are to Bolsonaro. They loathe the U.S.-supported Car Wash investigation, which wreaked havoc on Brazil’s domestic petroleum and construction sectors, led to mass layoffs, and opened the way for privatizations of profitable state assets. Operation Car Wash “might have been the biggest tool to forge the neoliberal agenda” in Brazil, Rousseff told Brasil de Fato last year.

Next year’s election will turn on whether Brazil’s right-wing elites, which have been on a tear for the last six years, will be able to regroup and coalesce behind a strategy to again block the Workers’ Party through undemocratic means or if enough of them are willing to change course and come to a tentative truce with Lula. The elites must decide whether they want to finish the job they started in 1969 or 2002.