Sergio Moro was a key political ally for the president, bringing the Brazilian center-right into Bolsonaro’s now-crumbling coalition. 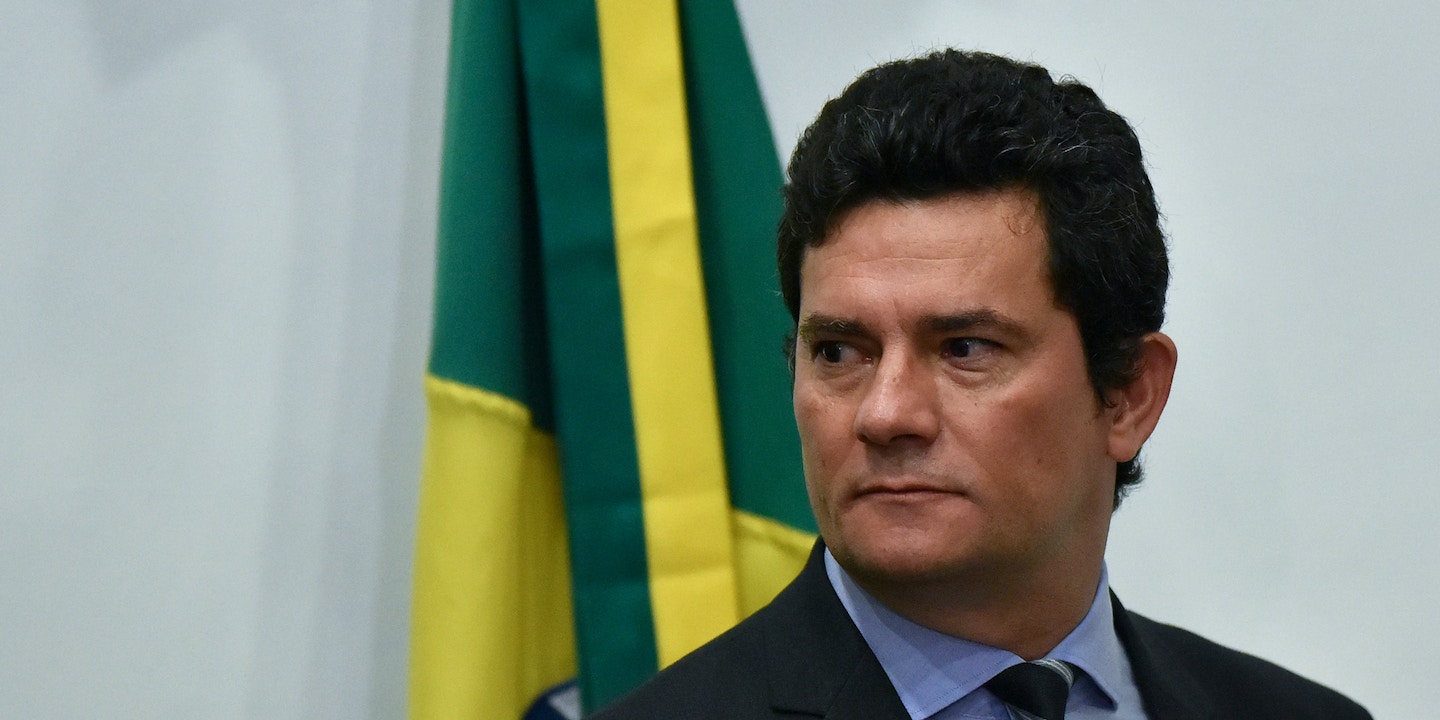 The official notice firing the Federal Police head bears Moro’s digital signature, but in a press conference Friday morning, the outgoing justice minister claimed that he was not informed of the move and did not sign the document. This and other revelations made by Moro could serve as grounds for impeachment, if the Brazilian body politic can muster the political will to support such a drastic measure. Members of Congress are already gathering signatures for a congressional inquiry into Moro’s allegations.

“I understood that I could not set aside my commitment to the rule of law.”

In his press conference, Moro suggested that Bolsonaro removed Valeixo because the president opposed investigations being conducted by the Federal Police. “He was concerned about investigations underway in the Federal Supreme Court and that a change would also be opportune at the Federal Police,” Moro said of Bolsonaro’s thinking. Moro said Bolsonaro’s concerns were not a reasonable justification for firing Valeixo, but added that he nonetheless searched for “an alternative solution, to avoid a political crisis during a pandemic.” In the end, Moro said, “I understood that I could not set aside my commitment to the rule of law.”

Notably, the Federal Police are conducting several investigations that could impact Bolsonaro, his politician sons, and several members of their inner circle.

Moro loomed large over Brazilian politics during the past several years, even before he accepted Bolsonaro’s offer to serve as justice minister. He was the judge at the center of the influential Operation Car Wash anti-corruption investigation that put former President Luiz Inácio Lula da Silva in prison, removing the popular politician from the 2018 presidential election and clearing the way for Bolsonaro’s victory.

When he entered government, Moro was among the most popular political figures in the country and was seen as an important ally for Bolsonaro, but also as a potential rival in the 2022 elections. The ex-judge’s standing, however, was seriously weakened after The Intercept began publishing an explosive series, in English and Portuguese, on malfeasance and potential illegal actions by Moro and Car Wash prosecutors. As a result of the series, Lula was eventually released from prison.

Though the fate of Valeixo had been a source of long-simmering tension between Moro and Bolsonaro, the clash heated up in recent days. Last August, Bolsonaro threatened to oust Valeixo, whom Moro had handpicked for the post, but eventually relented after Moro had threatened to resign, provoking an institutional crisis. In recent days, Bolsonaro made clear to aides that he was looking to fire Valeixo, and Moro restated his threat to resign. By Thursday evening, it appeared that Bolsonaro had again backed off, but then the notoriously capricious president made the move, prompting Moro to quit.

Investigations Into Bolsonaro and Sons

The Federal Police and Supreme Court are conducting multiple investigations that threaten Bolsonaro and his politician sons directly, as well as key allies in their orbit. A Federal Police investigation into fake news attacks directed at the Supreme Court recently began looking into the so-called Office of Hate, a pro-Bolsonaro online messaging operation run by the president’s son, Rio City Council Member Carlos Bolsonaro.

The Public Prosecutor’s Office requested on Monday that the Supreme Court investigate whether a rally in Brasília last Sunday violated national security laws. The demonstration was held in opposition to quarantine measures and called for a military coup and the forced shutdown of Congress. Bolsonaro spoke at the rally, and some of his allies in Congress reportedly helped organize it.

Sen. Flávio Bolsonaro, the president’s son, is also under investigation for an alleged money-laundering scheme and has repeatedly appealed to the Supreme Court to halt the investigation on technicalities. The case connects him directly to a gangster who was a key suspect in the assassination of Rio City Council Member Marielle Franco. (The gangster was killed in a police raid on his hideout in February, after months on the run.) Last August, Bolsonaro removed the financial oversight agency that first identified the suspicious transactions from Moro’s portfolio.

And the list of police and judicial probes into the Bolsonaros and their allies doesn’t end there. The various investigations have led to calls for more dramatic actions against the government.

Vladimir Aras, an influential member of the Public Prosecutor’s Office — who worked closely with Car Wash investigators for years and was briefly a member of the task force — tweeted, “The facts narrated by [Moro] are very serious. There were reports of forgery, obstruction of justice and crimes of responsibility” — referring to the standard for impeachable offenses, the equivalent of “high crimes and misdemeanors” in the U.S. Aras added that the allegations must be investigated by the Public Prosecutor and Congress.

Fernando Haddad, the presidential candidate from Lula’s Workers’ Party who lost to Bolsonaro in 2018, echoed these concerns, but called on government ministers to quit and force Bolsonaro to resign, rather than drag the country through a drawn-out impeachment process. And former President Fernando Henrique Cardoso also called for Bolsonaro’s resignation.

Political Crisis During a Pandemic

Last Thursday, Bolsonaro fired Health Minister Henrique Mandetta, who had publicly opposed the president’s overt denialism of the risks of the coronavirus crisis, which undermined Brazil’s early response strategy. The health system in multiple Brazilian states are currently in collapse, with long lines for intensive care beds in hospitals and mass graves being dug for the victims. The new health minister focused his messaging on the path to reopening the economy and easing quarantine regulations, which are already being relaxed in multiple states and had nonetheless been poorly enforced nationwide.

Bolsonaro is also at odds with the other most influential member of his cabinet, Finance Minster Paulo Guedes. Guedes, a hard-right former adviser to Chilean dictator Augusto Pinochet, opposed government spending to ease the financial crisis and insisted that Brazil must continue to enact neoliberal reforms that would cut public spending, regulation, and taxes.

Guedes chafed this week at the announcement of a new plan to spend $37.7 billion over five years in public works. The project was endorsed by the increasingly powerful cohort of former military leaders that occupy the majority of important positions in the administration. Guedes did not attend the press conference to announce the package. In response that night, a Bolsonaro-aligned media outlet used three minutes of prime time television to attack Guedes, saying that he “lost relevance in the government during the fight against Covid-19.” Meanwhile, the Brazilian stock market is down 38 percent from an all-time high in January, and foreign investors are pulling their money out of Brazil at the fastest rate in all of Latin America.

When Bolsonaro came into office, his political support emanated from three key groups of power brokers: the center-right, who fiercely opposed Lula’s Workers’ Party and were represented by Moro; oligarchs and international capital, who put their faith in Guedes’s reform agenda; and the military elite, who long distrusted Bolsonaro, a retired Army captain, but saw him as a vehicle to quickly secure political power democratically. Bolsonaro’s natural base is the far right: extremists who are vocal online, but have never before had much influence in national politics.

The president’s public approval rating plummeted since the onset of the coronavirus crisis and key allies have been jumping ship. With Moro gone and Guedes on the ropes, the far-right extremists cannot keep the government afloat and the military — most influentially represented in the administration by presidential chief of staff Gen. Walter Braga Netto — has filled the vacuum of leadership, despite the generals’ own serious misgivings about Bolsonaro’s erratic behavior.

Whether or not the far-right Bolsonaristas get the military coup that many of them are out in the streets demanding, for the time being it would appear that the military is now calling the shots in Brazil.

Even if Bolsonaro is impeached — a subject that is increasingly discussed in Brazil lately — Bolsonaro’s replacement would effectively implement de facto military rule through constitutional means. Impeachment would result in Vice President Hamilton Mourão, a retired general and proud admirer of the military dictatorship that ruled the country from 1964 to 1985, would take power — an option that even some on the left are wearily looking at as the lesser of two evils.