But the Israel lobby couldn’t take out Rashida Tlaib. 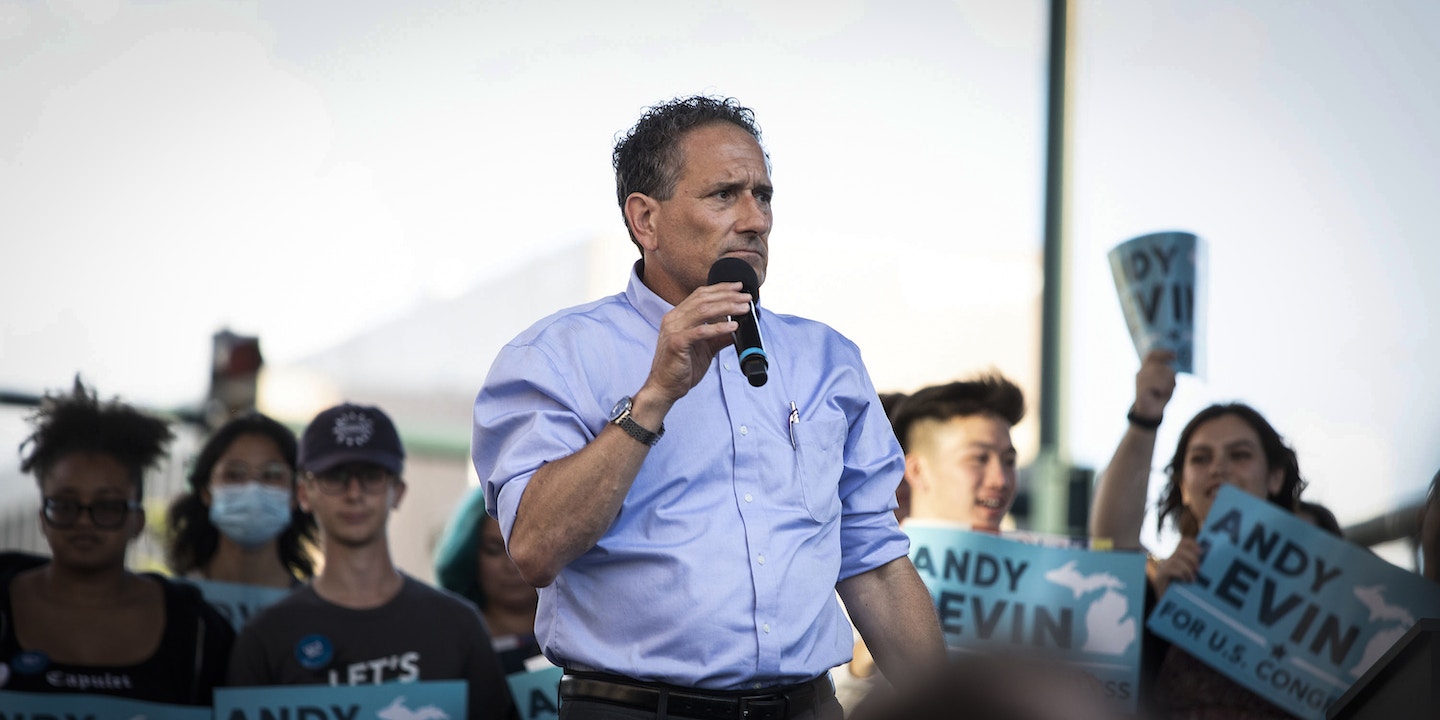 The American Israel Public Affairs Committee invested heavily in Michigan’s Democratic primaries on Tuesday, dropping over $8 million through its super PAC, United Democracy Project. Almost half of that spending went toward the race to unseat Democratic Rep. Andy Levin, who trailed fellow Rep. Haley Stevens with 40 to her 60 percent of the vote Wednesday morning.

Other conservative pro-Israel groups with deep ties to AIPAC — like Democratic Majority for Israel, Urban Empowerment Action PAC, and Pro-Israel America PAC — also made substantial financial investments in Michigan races. The right-wing Israel lobby spent over $10 million altogether across the state’s 11th, 12th, and 13th congressional districts, far outpacing any other interest group or the fundraising from the candidates themselves.

The campaign to defeat Levin marked a significant escalation in AIPAC’s push to quell criticism of Israel from Jewish members of Congress. “I’m really Jewish,” Levin told MSNBC’s Mehdi Hasan last week, “but AIPAC can’t stand the idea that I am the clearest, strongest Jewish voice in Congress standing for a simple proposition: that there is no way to have a secure, democratic homeland for the Jewish people unless we achieve the political and human rights of the Palestinian people.”

Levin’s was the marquee race Tuesday night, a rare primary between two sitting members in the Oakland County-based 11th District. Due to redistricting, Levin and Stevens both found themselves choosing between the 11th District and the neighboring 10th District, a Trump-leaning seat based in Macomb County. Both ultimately chose the 11th, leading to accusations of carpetbagging against Levin, whose current constituent base is largely within the 10th, and a series of still-unanswered questions about whether Stevens has been truthful about no longer living in the 10th District.

While the race was originally slated to be a typical moderate-versus-progressive affair, pro-Israel groups signaled early in the election that Levin — a self-proclaimed Zionist, former synagogue president, and scion of a prominent Jewish political dynasty — was one of their primary targets this cycle. AIPAC ultimately spent over $4 million in ads and mailers attacking Levin and boosting Stevens, and Stevens received over half a million dollars in bundled donations from AIPAC-aligned conduit PACs. Emily’s List, an establishment group that backs women candidates who support abortion rights, also spent over $3 million to elect Stevens.

AIPAC’s attacks on a candidate who is widely hailed as the most progressive Jewish member of the House brought responses from a suite of progressive organizations — most notably J Street, a liberal pro-Israel group that spent $700,000 on ads in the district, which criticized AIPAC for backing election-denying Republicans.

In an email to members of the Michigan Jewish community earlier this year, former AIPAC President David Victor declared that Levin was “the most corrosive member of Congress to the US-Israel relationship.” He contrasted Levin with Muslim members of Congress who have criticized Israeli human rights abuses — saying Levin, as a self-identified Zionist Jew, was “more damaging than Rashida Tliab [sic] or Ilhan Omar.”

A few minutes south of the 11th District, Rep. Rashida Tlaib, arguably the most vocal defender of Palestinian rights in Congress, appeared poised to fend off a fierce primary challenge of her own against Detroit City Clerk Janice Winfrey, nearly tripling Winfrey’s share of the vote. Winfrey’s bid drew headlines thanks to a massive initial fundraising haul and a pledge of support from a political action committee that claims to represent “a broad coalition of Black and Jewish” leaders, but receives most of its funding from hedge fund billionaire Daniel Loeb.

Despite the fact that Tlaib trounced a well-funded primary challenger in 2020, her opponents hoped a redistricting process would leave her vulnerable. But as the primary progressed, there was little sign Winfrey had made inroads in the district, which is anchored in western Detroit and contains prominent Muslim American communities like Dearborn. Even her backers seemed to recognize Winfrey’s long odds; the PAC funded by Loeb fell short of its pledge to spend over $1 million on her candidacy, instead ultimately spending just under $700,000.

In a third race, in Michigan’s 13th District, an open-seat brawl pitted AIPAC’s newly minted election machine against a purportedly progressive self-funder and a laundry list of other candidates. Adam Hollier, a state senator, received over $4 million in outside support from AIPAC. But that massive assistance was dwarfed by the over $5 million that entrepreneur and state Rep. Shri Thanedar spent to fund his own bid. Thanedar ultimately was declared the winner of the contest with only 28 percent of the vote on Wednesday morning, the clear beneficiary of a fractured field. His win is a blow to AIPAC, but it also leaves Detroit without a Black representative for the first time in over 50 years.

Hollier, who also received over $1 million from the cryptocurrency-aligned Protect Our Futures PAC, was the early favorite among Detroit observers, but late polls showed him struggling to break away from a crowded field. He also struggled to overcome the name recognition Thanedar had built in the area after his unsuccessful run for governor in 2018. Despite losing handily statewide, Thanedar won the city of Detroit in that race.

While Thanedar was purportedly the most progressive candidate vying for the 13th District — his campaign website endorses key progressive planks like Medicare for All and a Green New Deal — his decision to self-fund his run and his prior donations to Republican candidates appear to have alarmed progressive organizations, which overwhelmingly steered clear of endorsing his candidacy despite his lead in pre-election surveys.

Update: August 3, 2022
This story has been updated with new election results.