The overthrow of the Iranian regime would be just, but if recent history has taught us anything, its collapse is unlikely to be pretty. 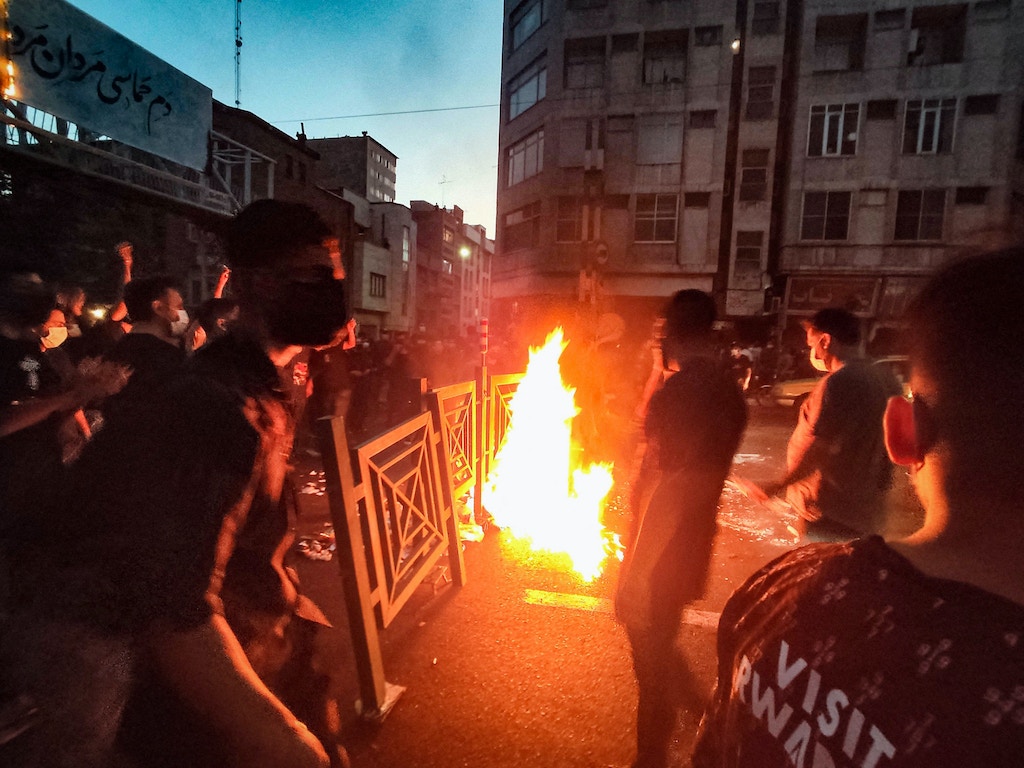 Iranian demonstrators take to the streets during protests following the death of Mahsa Amini in police custody in Tehran, Iran, on Sept. 21, 2022.

Over the past week, thousands of Iranians, young and old, urban and rural, have taken to the streets to protest the authoritarian rulers of the Islamic Republic. The spark that ignited the rage of an already desperate nation came in the death of a young woman in police custody, Mahsa Amini, after being arrested by Iran’s “morality police” for wearing her hijab improperly.

Unlike past uprisings that have been about stolen votes and rising commodity prices, these protests over mandatory hijab wearing target an ideological pillar of the regime. The men and women confronting Iranian police in the streets are going up against a system that has denied them not just hope for the future but also control over their daily lives. Their bravery deserves both our admiration and practical support. We should not, however, let our hopes blind us to all the dynamics at play.

There are only a few possibilities for how a viable revolutionary uprising could play out. If recent history has taught us anything, none of them are likely to be pretty.

Iran suffers from isolation, polarization, and ideologically driven leadership. The Islamic Republic will likely fight to the bitter end before it agrees to peacefully transition from power. This grim reality means that there are only a few possibilities for how a viable revolutionary uprising could play out. If recent history has taught us anything, none of them are likely to be pretty.

The last decade gave us many examples of heroic young men and women in the Middle East challenging authoritarian regimes in the streets, just as Iranians are today. Tragically, that series of uprisings, once optimistically known as the “Arab Spring,” produced a series of heartbreaking humanitarian crises that failed to produce democracies and left many people worse off. This is not because of the racist claim made by Western chauvinists that Middle Easterners are simply incapable of democracy. The reason has to do with the nature of dictatorship itself.

The young Syrians and Egyptians who went into the streets to protest their governments were among the best and brightest of their generation. The problem that they faced, however, was that life under dictatorship had not allowed any alternative institutions to grow that could easily replace the tyrannies now in place. Independent political parties and trade unions that people could have otherwise rallied around were severely repressed or simply did not exist. In Egypt, this vacuum allowed the military establishment to step in and take control when the government lost power. In Syria, it resulted in violent anarchy.

The dissident intellectual Yassin al-Haj Saleh once explained how this dynamic came to pass: “For 30 years, the Ba’ath Party has made a project of crushing all political life in Syria. So when the uprising came, we had no real political organizations, only individuals here and there.”

The Islamic Republic of Iran today may not be quite as totalitarian as Ba’athist Syria or Hosni Mubarak’s Egypt — but it’s been getting closer every year. The goal of a dictatorship is to create social conditions where people are forced to choose between stable tyranny and ungoverned chaos. And this is not an easy choice; immiseration, of the human spirit and otherwise, can be found on either path. I’ve met more than a few people in Syrian refugee camps along the Turkish border who despised the Assad government to the core of their being, yet wished, in retrospect, that the revolution had not taken place.

The Egyptian dictatorship of Mubarak was in some sense dependent on the United States as a guarantor, which also had the ability to pressure at least a temporary change of power in the face of popular protest. The misfortune shared by Syrians and Iranians is that their rulers have no such foreign patrons to whom appeals can be directed, and both regimes have proven that they are willing to fight to the end before they give up power. As we saw in Syria, that is a recipe for a merciless conflict that destroys the social fabric, leaving even the victor with little to show at the end.

Iranians face their own set of unique challenges. Unlike in Syria, there have not yet been significant defections from the security forces to join with the protesters. A huge number of Iranians oppose the regime, yet they remain outgunned. Even if protesters were armed with the help of military defectors or foreign powers — and it is not clear the bulk of them would like to be — they face the prospect of a bitter insurgency or civil war with no certain outcome except misery.

A collapse of Iran’s nominal political leadership would leave powerful security services like the Islamic Revolutionary Guard Corps in prime position to impose direct military rule. Iran is also ethnically divided — the young woman who died in police custody was herself ethnically Kurdish — and that diversity has often created further divisions. The brief vacuum of power opened by the 1979 Iranian revolution led to a brutal conflict between the Persian-dominated central government and Kurds who were long-dissatisfied with Tehran’s rule. The rebellion was put down by force.

The last shah of Iran, Mohammad Reza Pahlavi, ran a cruel regime hated by many Iranians. It was a credit to him, though, that when Iranians took to the streets against his government, he decided to leave the country rather than killing whoever was necessary to hold power.

The revolutionary Islamic Republic, on the other hand, shows no signs of climbing down easily. Iran has become so isolated from the rest of the world that its leaders have precious few places to flee, if they have anywhere to go at all. And the regime’s ever increasing internal repression is an indication that it would rather the entire country be destroyed before the government is overthrown. All the political foundations necessary for a peaceful transfer of power have been eradicated. Though a credible opposition movement may form itself abroad, there is none today that exists inside the country.

Iran’s government will change some day. We can only hope that the change looks closer to Czechoslovakia than Syria.

The hope of many who supported the 2015 nuclear deal with Iran was that it would gradually produce internal changes in Iran that would make a future political transition less catastrophic. Integrating Iran into the international system, creating economic interdependencies with the West, and reducing the economic and social isolation of the Iranian people were all part of this vision. Over time, the theory went, the hostile standoff between the West and Iran’s rulers would cool off. Iran’s middle class — now being crushed by sanctions — could gain the ability to push for greater incremental reforms of the government. Over time, the aging rulers of the Islamic Republic would steadily release their death grip on Iranian society as a new generation, enriched by trade and connected to the West, came up to replace them.

Call it wishful thinking if you will, but the people pushing for straight military confrontation and regime change have offered no alternative plan that is likely to produce positive change. Quite a few of them don’t seem to care what happens to Iranians at all, so long as their geopolitical goals for the region are achieved. Destabilizing a country of 80 million people — not to mention one with an active nuclear program — could have profoundly negative effects for the world if there is no plan in place for a peaceful transfer of power.

By some estimates, at least 30 Iranians have already been killed in the current uprising. The country is under an internet lockdown. Journalists, activists, and ordinary protesters are being swept into prison.

In one sense, advocates for regime change are right: The Islamic Republic’s days are numbered. Iran’s government will change some day. We can only hope that the change looks closer to Czechoslovakia than Syria.

The blame for what is happening — and what terrors may come next — rests with the leaders of the Islamic Republic who have been unwilling to compromise with the unhappy population over which they rule. In a just world, this regime would simply collapse and give way to a new order brought to power by free and fair elections representing the will of the Iranian people. Though I would be overjoyed to be proven wrong, it pains me to conclude that that is not the world in which we live.