The Pandemic and War — Not Government Spending — Caused Inflation, According to Nobel Prize Winner

A new paper by Joseph Stiglitz and Ira Regmi has huge implications for everything about who holds power in American life. Pasta shelves are empty at a Save Mart supermarket during the pandemic in Porterville, Calif., in 2020.

I realize this question seems extremely boring: Has the recent bout of high inflation in the U.S. been caused by insufficient supply in various areas of the economy, or too much overall demand?

But please bear with me. Because the answer illuminates and affects every single aspect of the life you’re living, right now. Would you like your town’s jagoff employers to be so desperate that they apply for you to work for them, instead of the other way around? Would you like to defuse the underlying rage in American life that seems to lead to a mass shooting every 37 seconds? Would you like $50 trillion? (Not made up, see below.) Then keep reading.

A new paper by Ira Regmi and Joseph Stiglitz makes the case that the answer is the former, i.e., insufficient supply. As they put it, “Today’s inflation comes mostly from sectoral supply side disruptions, largely the result of the COVID-19 pandemic … and disruptions to energy and food markets originating from Russia’s invasion of Ukraine. … [It] is not the result of significant excesses of aggregate demand such as might have arisen from excessive U.S. pandemic spending.” This means large, fast increases in interest rates by the Federal Reserve “will not substantially lower inflation unless they induce a major contraction in the economy, which is a cure worse than the disease.”

Regmi is program manager for the macroeconomic analysis program at the Roosevelt Institute, a progressive think tank. Stiglitz is as fancy as economists get: He won the quasi-Nobel Prize in Economics in 2001; he’s now a professor at Columbia University; and he once was chief economist for the World Bank.

Ninety-five percent of Americans are unaware of the stakes of this issue. If Regmi and Stiglitz are correct, it suggests that we can use the tools of the government to make life better for almost everyone. If they’re wrong, perhaps that’s impossible — because the Immutable Laws of Economics simply don’t allow it — and if we try to make our lives better, we will be punished for our hubris.

The paper’s math is as basic as it gets and it’s lucidly written, so it should be comprehensible for any audience, even reporters. However, Regmi and Stiglitz are far too sober and responsible to include the powerful political relevance of their work. I’m not, though, so let’s start there.

Faithful consumers of America’s elite media — TV news, the New York Times, the Washington Post — generally get the impression that everyone in the U.S. is on the same team. While we may disagree on how to get there, we all share the same economic goals: a fast-growing economy with low unemployment and a thriving middle class, one whose members keep doing better than their parents.

This is absolutely false. The people at America’s commanding heights do not want this at all. And if you look at it from their perspective, that’s easy to understand. Low unemployment means an unruly workforce with the leverage and confidence to unionize. Rising wages for employees means less money for employers. The higher inflation that tends to accompany a high-demand economy of mass affluence is effectively a massive transfer of wealth from creditors to debtors. As an Ohio business owner once told the New York Times, “I sometimes wish there was actually a higher unemployment rate.”

So the uncomfortable truth is that the top 1 percent generally prefer a slower-growing economy with higher unemployment to its opposite. This is the case even though they might be richer in absolute terms in an economy that worked for everyone. But instead they prefer to have less money with more relative power. That preference may seem strange, but this dynamic generally holds true in all organizations, from your neighborhood elementary school up to a nation state. You could call it the iron law of institutions: The people running things almost always would rather be firmly in charge of a weaker institution than be part of a stronger institution in which their power can be challenged.

America’s leaders have put a lot of work into this maleficent project over the past 50 years, and their success can be measured in just two startling statistics. First, when the federal minimum wage was established in 1938, it was worth about $5.30 in today’s dollars. Then for the next three decades, it went up hand in hand with the U.S. economy’s growing productivity until 1968, when it reached about $13 an hour. But since then, it’s not just stopped going up, it’s also fallen in real value to today’s $7.25. However, if it had continued going up with productivity, it would now be around $25. That means that a couple who both work minimum wage jobs would make $100,000 per year. We know from those first 30 years of the minimum wage that there’s no economic reason that that was impossible. It’s just been politically impossible.

Second, the ultra-establishment RAND Corporation recently calculated how much money the increasing income inequality over the past decades has cost most Americans. They looked at the U.S. income distribution in 1975, and then calculated how things would have played out over the next 43 years through 2018 if the income distribution had remained at 1975’s level. RAND’s finding: The bottom 90 percent would have taken home a cumulative $50 trillion more in pay. (And of course the top 10 percent would have taken home $50 trillion less.) Again, this was a political choice, not an economic necessity.

This is the background to the economic fallout from the coronavirus pandemic.

With the sudden eruption of Covid-19, all normal rules of American politics were suspended. The government was willing to spend truly gigantic amounts of money, particularly via the CARES Act in 2020 and the American Rescue Plan in 2021. Moreover, large tranches of that spending essentially just involved giving people money.

There are two possible stories about what happened next. This is where the Regmi and Stiglitz paper comes in. 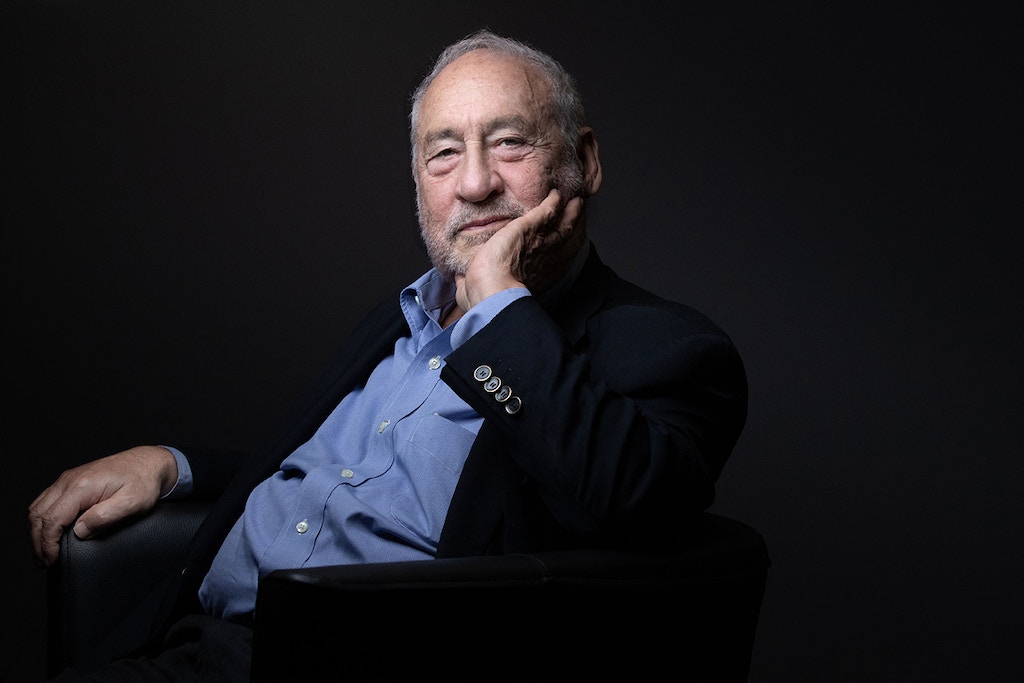 U.S. economist and recipient of the Nobel Prize in economic sciences Joseph E. Stiglitz poses during a photo session in Paris on Sept. 15, 2022.

The inflation of the past several years has genuinely been too high and too sustained for the well-being of the U.S. If it was caused by too much demand — i.e., the government showering Americans with cash that they then wantonly spent — this would demonstrate the dangers of profligacy. In that scenario, we should be grateful that those days of extended unemployment benefits and an expanded child tax credit are behind us. What we need now is for the Federal Reserve to continue to bludgeon the economy with interest rates hikes until unemployment goes up and Americans stop buying stuff. We can then move forward, having learned a bitter lesson about government interference in the workings of the free market.

But if the inflation was caused by insufficient supply — due to the pandemic and the war in Ukraine — the situation would look completely different. That would mean these years of higher inflation were largely unavoidable, and the firehose of government cash was the wisest possible response to an emergency. It would also indicate that regular people should consider how to best use the government’s extraordinary power to conjure up spending from thin air in future emergencies, and even non-emergencies.

Regmi and Stiglitz’s argument is well worth reading in full. But these are the highlights:

To begin with, they illustrate that there was no spike in aggregate demand over the past several years. Rather, the spending by Americans on personal consumption fell off a cliff at the beginning of the pandemic — and then rebounded to the pre-pandemic trend by mid-2021. But inflation began rising when demand was still significantly below trend. As they put it, “this simple comparison refutes the claim that excessive consumption was the central cause of excessive inflation that followed the post-pandemic recovery.” They therefore conclude that “the inflation we’ve experienced is not best understood as an excess of aggregate demand over aggregate potential supply. Rather, today’s inflation is the result of a series of microeconomic, industry-specific problems.”

They then examine these industry-specific problems. They point out that of the 7.7 percent year-over-year rate of inflation as of October 2022, almost 3 percentage points were due to increasing energy and food costs. Both sectors were strongly affected by Russia’s invasion of Ukraine, and the subsequent sanctions the U.S. placed on Russia.

Another significant source of inflation has been the car industry. In 2021, Regmi and Stiglitz say, 1.94 percentage points of inflation “were due to automobiles and car parts.” And “key to the car shortage,” they write, “was the lack of microchips, and the lack of microchips was because of a simple market failure: By and large, car manufacturers (except Tesla) had canceled chip orders at the onset of the pandemic.”

Corporate profiteering — i.e., companies using inflation as an excuse to raise prices faster than their costs — has also contributed to inflation.

The paper further argues that corporate profiteering — i.e., companies using inflation as an excuse to raise prices faster than their costs — has also contributed to inflation. This is illustrated by the fact that “firms with the most market power drove the sharp increase in aggregate markups in 2021.”

Then there have been shifts in demand — e.g., a desire toward bigger houses as people work more from home, and away from office buildings. While overall demand hasn’t increased, this causes inflation in the higher-demand sectors.

So the picture, when all is said and done, is pretty clear. The scale of the government response to the pandemic was extraordinary: Regmi and Stiglitz say that the International Monetary Fund “estimated that the fiscal stimulus related to the pandemic was 25.5 percent of the total US GDP.” Yet this spending over the past two years contributed to inflation in only a modest way at most.

This in turn tells us that we should not fear using the government’s power in bad times to prevent the economy from collapsing, and should look carefully at the role it could play in good times. Of course, that’s a lesson we could have learned long ago. After World War II, everyone had seen with their own eyes how the Keynesianism of the war had pulled the world economy out of the Great Depression. As the Polish economist Michal Kalecki wrote at the time, we had discovered we could create a more or less permanent “synthetic boom”: high wages, high worker power, and low unemployment. But we have to choose to do so. We can still make that choice, but only if we understand the reality in front of us.