2022 has seen right-wing attacks on trans rights increasingly aided by the tacit, if sometimes unwitting, transphobia of liberal institutions. Democratic Party representatives march toward the Supreme Court during a protest of the court overturning Roe v. Wade in Washington, D.C., on July 19, 2022.

When 2022 is tallied in the annals of history, it will no doubt be remembered as the year the Supreme Court ended the constitutional right to an abortion. Yet, while the decadeslong right-wing assault on reproductive liberties reached new heights this year, it also met a broad wave of long overdue resistance, even in crimson red states. The midterm election results were in many ways a popular rebuke to the Republican pro-natalist agenda — cold comfort as that might be in a country of minority rule.

The mass efforts to defend abortion access have not been echoed in the fight for trans lives.

The crucial struggle for abortion access is, however, a response to only one front in the far right’s all-out war on bodily autonomy and reproductive freedom. In statehouses nationwide, Republicans consistently put forward extreme anti-abortion bills at the very same time that they have proposed bills to attack, immiserate, and eliminate trans people, particularly trans children.

The GOP has made clear that its anti-abortion efforts go hand in hand with an anti-trans eliminationist project; they are two sides of the same coin. The mass efforts to defend abortion access, however, have not been echoed in the fight for trans lives.

Rather, 2022 has seen right-wing attacks on trans rights increasingly aided by the tacit, if sometimes unwitting, transphobia of liberal political and media institutions — consider the numerous New York Times reports and columns, for example, that have this year put trans lives up for debate. This has been no less than a victory for fascism.

In previous years, liberal transphobia seemed largely the preserve of Britain’s media ecosystem. Looking across the Atlantic, to my birth country, I had felt a certain relief that in the mainstream U.S. discourse, anti-trans rhetoric was, for the most part, understood to be a mark of the far right.

This year anti-trans liberal feminism — the sort championed by author J.K. Rowling — has been mainstreamed in the very same opinion pages that once treated the position as an unpleasant British curiosity.

The far right has, meanwhile, only escalated its anti-trans onslaught, grimly secure in the knowledge that, unlike with abortion, no significant political pushback will come. This is in part thanks to U.S. transphobes who falsely consider themselves in opposition to the far right — like some New York Times columnists — as well as fangless Democrats who treat trans people as an afterthought. Even the anti-fascist left has not done enough to take up the fight for trans rights. 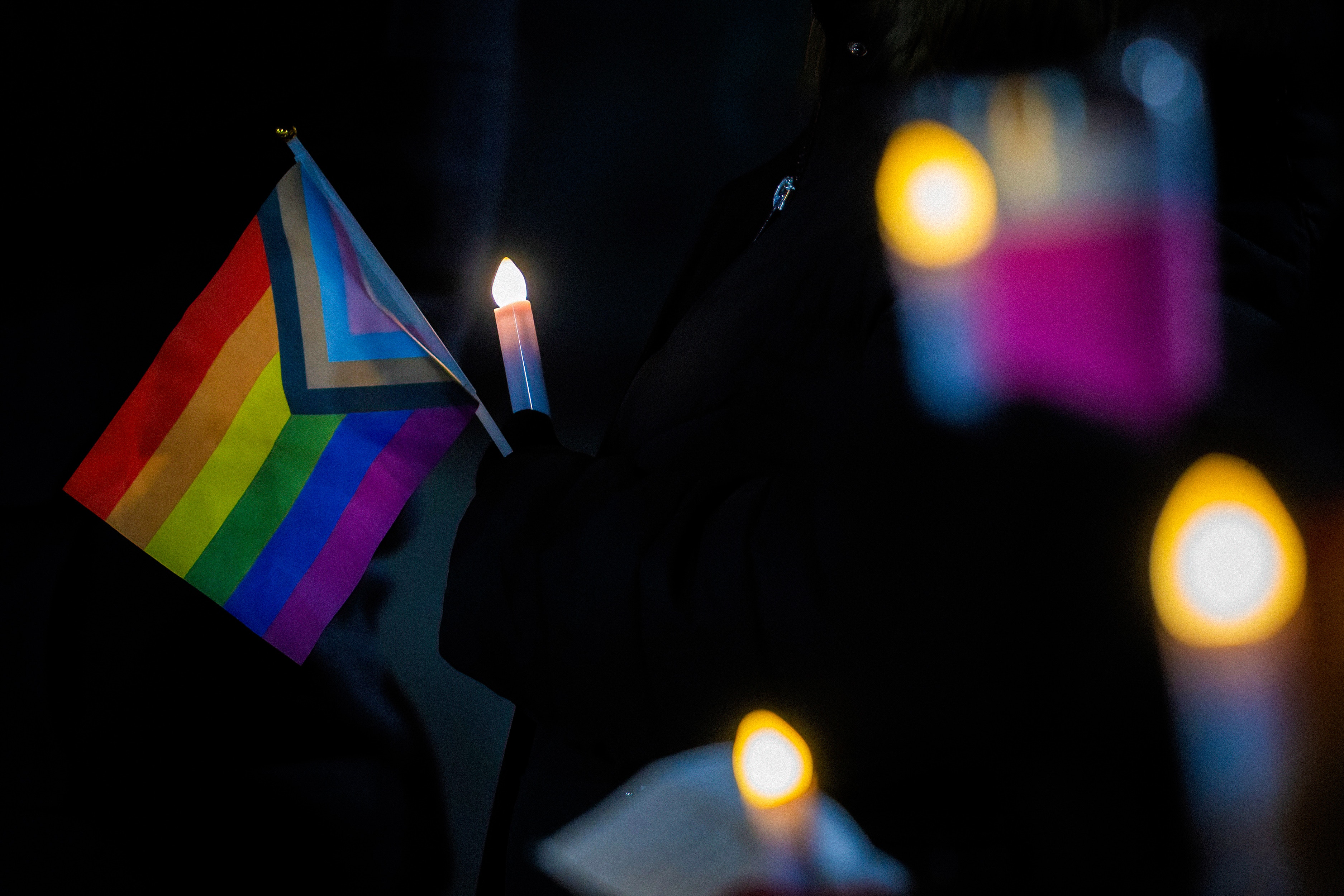 Pride flags and candles wave during the Transgender Day of Remembrance in Wilkes-Barre, Penn., on Nov. 20, 2022.

In 2022, state lawmakers filed a record number of anti-LGBTQ bills — nearly 300 — with many targeting trans kids in schools. Ten states barred trans students from playing sports, two states barred trans children from accessing the correct bathrooms, and two states banned discussions of sexual orientation or gender identity in schools (which, of course, only means the discussion of non-cisgender identities and non-heteronormative sexual orientations).

Republican Texas Gov. Greg Abbott directed state agencies to investigate parents of trans kids as child abusers, an effort Republicans in other states are looking to advance. In Congress, far-right extremist Rep. Marjorie Taylor Greene, R-Ga., introduced the first piece of federal legislation, co-sponsored by a whopping 40-plus House Republicans, to outlaw gender-affirming care for minors nationwide. That law would make providing such care a felony punishable by up to 25 years in prison.

The only thing holding many of these barbaric laws and policies at bay are lawsuits filed by trans children and their families, represented by attorneys like Chase Strangio of the American Civil Liberties Union.

The outlook for 2023 remains dark: Republicans will control the U.S. House and state lawmakers — with scant reason to limit their anti-trans eliminationist efforts — will continue apace. Immediately after the midterms, lawmakers in Tennessee filed bills to ban gender-affirming health care for children in next year’s state legislative session.

Meanwhile, outside statehouses and courtrooms, the far right has declared open season on LBGTQ spaces. It is now common practice for armed, self-identifying Christian nationalist militia members to harass family-friendly drag brunches and drag queen story hours. When a mass shooting last month at Club Q, an LGBTQ nightclub in Colorado Springs, left five people dead, the national response was one of shock but not surprise. Anti-LGBTQ violence felt all but inevitable.

The response from the usual liberal bastions wasn’t surprising either: There was handwringing about physically defending queer people. A week after the massacre, the New York Times editorial board chose to dedicate column inches to condemning armed anti-fascist groups who have been protecting queer spaces in response to this ongoing wave of armed fascist harassment.

Fascist propagandists like the Manhattan Institute’s Christopher Rufo — who cynically transformed “critical race theory” from a term of scholarly inquiry into a racist foghorn — have spoken publicly about stoking their conservative base with anti-LGBTQ myths of “groomers” and pedophiles.

It’s not a secret that the anti-trans panic has been manufactured by think tanks or that anti-trans legislation is drafted from model bills, circulated from the top down, and spewed from Tucker Carlson’s furiously contorting mouth into millions of living rooms every evening. There is nothing organic nor grassroots about this anti-trans moral panic, yet it is accorded the status of a legitimate public concern.

“Rufo is so confident in his disdain” for liberal establishment media, noted writer Max Fox in a recent essay for Parapraxis, “that he can be seen telling credulous liberal journalists precisely how he has manipulated them into carrying out his campaign.”

There is nothing organic nor grassroots about this anti-trans moral panic, yet it is accorded the status of a legitimate public concern.

It’s working: Liberals might not be echoing QAnon “groomer” conspiracies, but anti-trans panic abounds, reliably articulated as fear for the fates of children — notional children, who are presumed cis, that is. Time and again, I’ve heard ostensibly well-meaning liberals regurgitate the same sentences that were used in previous eras to treat gay identity, or interracial couples, as sites of potential peril. The refrain is the same: I support it, but won’t children suffer? And the answer should be the same too: Only if we maintain a world wherein such identities and relationships are deemed unnatural and unwanted.

This is not a question of showing liberal deference to personal identity. It’s about who is and is not permitted to produce and reproduce the world as they see fit. When it comes to queer and trans liberation, especially of queer trans people of color, we have this year seen the consequences of treating the recognition of identity as merely an issue of visibility or representation. Without a commitment to our shared liberation, without active solidarity, increased visibility for trans people can just mean greater exposure to risk.

We will carry the struggle for reproductive freedom into the new year. We must: Republican efforts to decimate reproductive health care have been horrifyingly successful, and they will not stop. Avoiding a red wave in the midterms did not restore abortion rights, let alone the free and accessible abortion and reproductive care we so need.

Yet we can’t win this fight unless we understand the right’s anti-abortion politics for what they are. That means seeing why the struggle for trans rights and reproductive justice must go together. For the most part, beyond a highly religious minority, those who are anti-abortion are not driven by a true belief in the inviolable value of all fetal life; Republicans would have and pay for fewer abortions themselves if that were true, and they would arguably care more about the lives of poor, Black pregnant women.

Republican efforts to decimate reproductive health care have been horrifyingly successful, and they will not stop.

Instead, when Republicans invoke the child who needs saving from abortion, they refer to a political construction, a figuration: the “innocent” white, cis child at the heart of the Republican political imaginary, reproduced within the confines of the private nuclear family. It’s this organization of white standing and property that anti-abortion politics aim to uphold.

It’s not an accident, then, that Republicans call upon the same myth of imperiled children to warn of trans indoctrination, grooming, or “social contagion” — with the very same notions of “purity” and traditionalist family reproduction at play.

Fascism holds this imaginary “innocent” child at its rhetorical center — and when it comes to abortion politics, liberals and leftists have rejected its invocation, insisting instead on prioritizing the health and well-being of actually living adults and children and their rights to bodily autonomy.

In the struggle for trans rights, all too many liberals — and some leftists — have interpellated notions about pure and innocent children who must be somehow protected from transness. That is, they have let fascism’s child win the day. Vanquishing the right’s pro-natalist fascism requires standing with trans children.