“If the government thinks it has these powers, the public should know about it.” 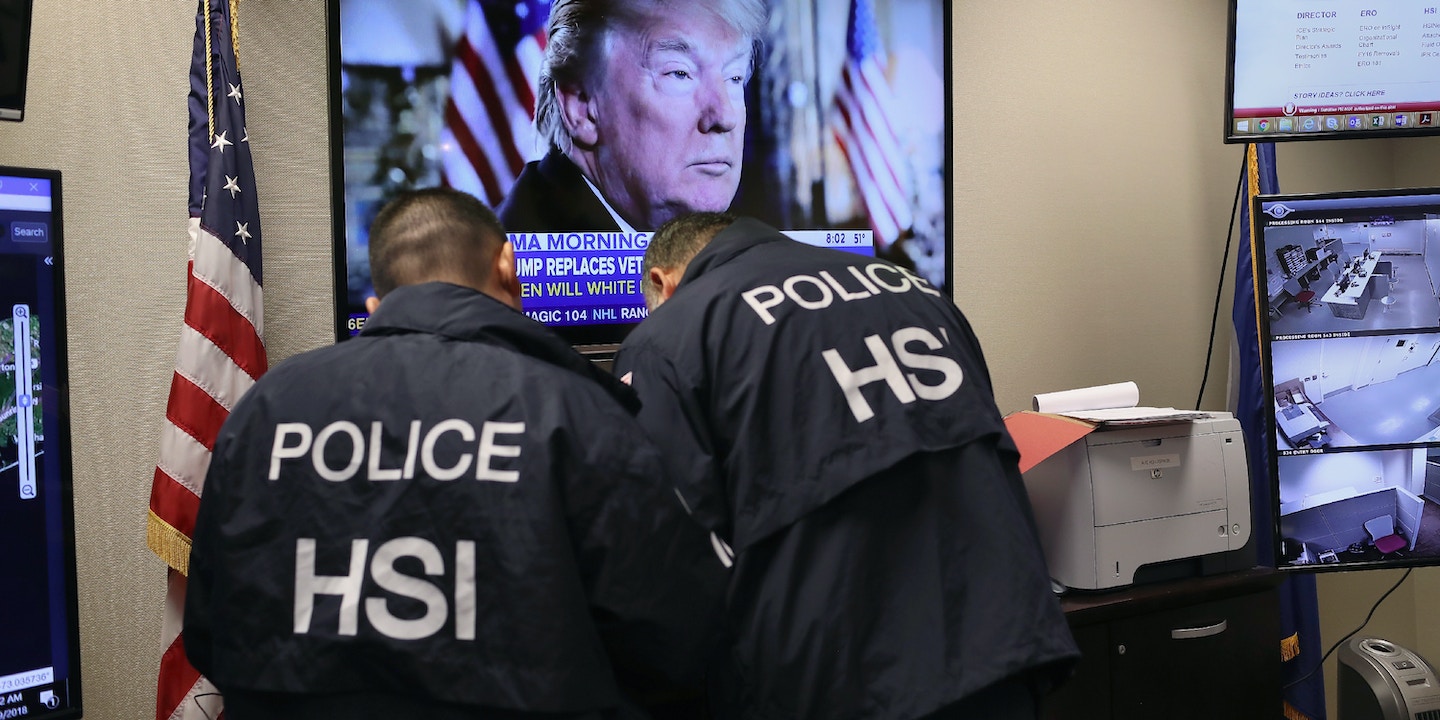 Homeland Security Investigations, or HSI, is the nation’s second-largest federal investigative agency — yet few Americans have ever heard of it. Housed within the Department of Homeland Security’s U.S. Immigration and Customs Enforcement, HSI has operated largely out of the public spotlight for over a decade, even as its agents’ cases have led to multimillion-dollar seizures and high-profile arrests.

Over the last year, however, HSI has begun to attract more public attention, amid reporting from The Intercept and other outlets. Media reports have shed light on HSI’s multibillion-dollar collaborations with Palantir Technologies, the data-mining firm founded by Silicon Valley billionaire Peter Thiel; the agency’s access to databases shared with the CIA and the Pentagon’s Defense Intelligence Agency; HSI’s reliance on questionable gang databases as a means to facilitate deportations; and HSI’s guidelines for asset seizures.

In February, another layer was peeled back when the independent media website Unicorn Riot began publishing internal policy handbooks for HSI agents from a 2012 manual outlining how HSI operates on the ground. The Intercept has previously reported on HSI handbooks covering denaturalization authorities and search and seizure guidelines.

Despite being six years old, the manual, which was obtained by The Intercept, is still considered privileged by the agency. And ICE isn’t interested in commenting on the content of the documents, despite the fact that they have become public. ICE spokesperson Matthew Bourke told The Intercept that the “internal training materials are law-enforcement sensitive, not publicly available, and we’re therefore not prepared to comment” on any of the handbooks.

Secrecy surrounding internal federal policies pervades all law enforcement communities, said Jonathan Blanks, a research associate for the Cato Institute’s Project on Criminal Justice. “Federal law enforcement agencies don’t like to share any information that they don’t have to,” he said. “Usually, they claim it would give away their investigative techniques — that’s the sort of thing they do to avoid disclosure.”

Federal law enforcement can rely on loopholes in the Freedom of Information Act to wriggle out of disclosure based on the protection of their operational security. One of the exemptions, known by its designation “7E,” lets law enforcement preclude revelations that “would disclose techniques and procedures for law enforcement investigations or prosecutions.”

All law enforcement resist divulging their internal workings, explained Patrick Eddington, a former CIA military analyst who now works as a research analyst for Cato, on the grounds that revealing internal policy could harm their missions. “As a general rule,” said Eddington, “they all try to keep internal documents that deal with training, procedures, etc., out of the public’s hands, on the rather flimsy rationale that making them public will aid criminals.”

The level of secrecy surrounding ICE’s procedures — especially for policies that have a major effect on the safety and well-being of millions of people in the U.S. — is over the top, privacy advocates told The Intercept. “There is intense public interest in understanding these processes,” said David Snyder, executive director of the First Amendment Coalition. (Disclosure: The First Amendment Coalition has received financial support from First Look Media, the parent company of The Intercept.) Snyder went on, “Immigration is a flashpoint right now, and how ICE goes about its business is very important.”

The information in the handbooks is important for the public interest, according to César Cuauhtémoc García Hernández, an immigration law professor at the University of Denver and author of the book “Crimmigration Law.” “I think the documents as a whole generally give a picture of HSI that is familiar to those of us who watch what HSI agents are doing around the country,” said García Hernández.

García Hernández explained that the HSI handbooks, while “not particularly remarkable,” do show the internal workings of a federal agency that prefers to operate in the shadows. What was more notable than the information contained in the handbooks was that the documents were kept secret to begin with. “I was happy to see the Department of Homeland Security giving detailed and fairly reasonable guidance to its agents, and I think that kind of training is something for which the agency ought to be commended,” said García Hernández. “But, of course, if no one knows that this is the kind of training that they’re receiving, then of course they can’t receive credit where credit is due.”

The so-called law enforcement sensitivity of the information may be why the government doesn’t want the handbooks in public circulation, said Sarah St. Vincent, a Human Rights Watch researcher. But, she added, that doesn’t mean the contents shouldn’t be publicly available. “People should know what the government can do to them and to their rights,” she said.

“If the government thinks it has these powers, the public should know about it.”

Resisting exposure of HSI policies based on operational concerns — especially with outdated documents like the 2012 manual — sounds like hollow reasoning to St.Vincent. She also questioned the government’s claim that releasing the information could tip people committing crimes to the fact they’re being targeted. St.Vincent said the right of the public to know how the government interprets its authorities supersedes any claims to operational security, at least in general terms. “If the government thinks it has these powers,” said St.Vincent, “the public should know about it.”

The First Amendment Coalition’s Snyder told The Intercept that, though there could be reasons to withhold the documents, simply identifying the information as “law enforcement sensitive” isn’t one of them. “How the government goes about its business is in the public interest,” he said.

Snyder added that the age of the documents would cast doubt on the claim that the information contained in the manuals could affect open cases. “In an ongoing investigation, if you don’t want the target of investigation to be tipped to the case, you can withhold information,” said Snyder. He added, “Policies they are still thinking about, drafts, I could see potentially a valid reason to withhold.” But, he said, the fact that the documents in question are from 2012 and have mostly been superseded by newer material makes it less likely that relevant material from the handbooks could damage ongoing cases.

Either way, the manual offers a valuable window into the operations and policy for an organization that has seen its mission grow, said Hugh Handeyside, the senior staff attorney for the American Civil Liberties Union’s National Security Project. People’s rights can be affected by HSI policies, and it’s important to know where the boundaries of ICE’s claimed authority lie. “This document offers a valuable window on the policies of an agency whose operations appear to have expanded rapidly,” Handeyside wrote in an email. “Given that it affects the legal rights of those who come into contact with HSI — including U.S. citizens — it is important for the public to be able to access these policies.”

The tendency toward secrecy surrounding HSI policies at ICE, said García Hernández, the law professor, suggests that “the agency’s cultural inclination is to protect itself from allowing the public to know what it’s doing.”