With the help of a who’s who of conservative activists, the Supreme Court justice’s wife aims to open up a new front in America’s political wars. 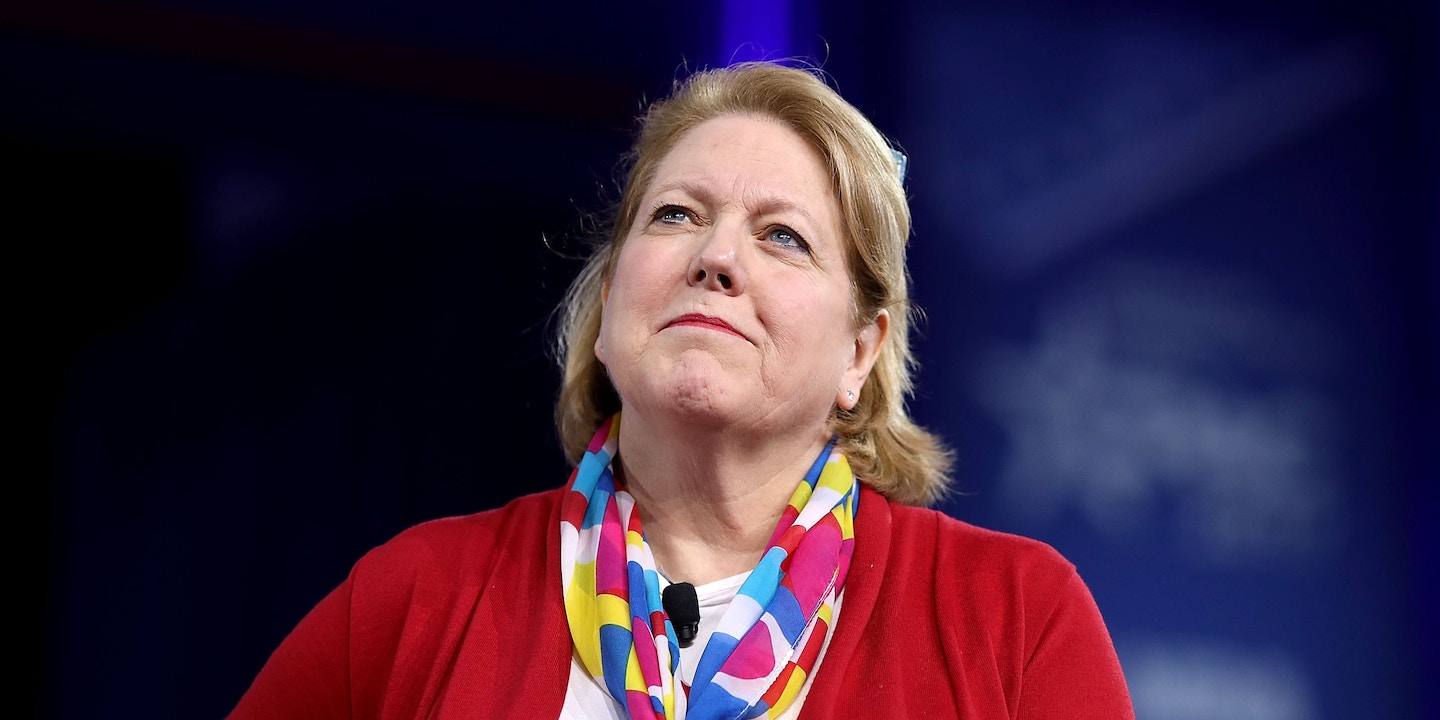 Conservative activist Virginia “Ginni” Thomas is launching yet another project to wage war on multiple fronts of America’s most heated cultural and political debates. This time, however, her plan will include a project to “protect President Trump” using at least two new campaign-related political entities, according to a presentation obtained by The Intercept and Documented.

Thomas, the wife of Supreme Court Justice Clarence Thomas, unveiled the new venture in a closed meeting of GOP lawmakers, donors, and Christian-right leaders last month, seeming to make reference to the movement disarray and electoral losses suffered by conservatives in the Trump era — and the gains made by left-wing groups and politicians.

“Our house is on fire and we are stomping ants in the driveway.”

“Our house is on fire and we are stomping ants in the driveway. We’re not really focused on the arsonists who are right around us,” Ginni Thomas said.

Some of the most controversial icons in conservative circles will be involved with other branches of Thomas’s new project, which is dubbed “Crowdsourcers.” One such project is titled “Protect Our Heroes,” led by conservative filmmaker and provocateur James O’Keefe.

The node of the project focused on political campaigns — slated to do business under the name “American D-Day” — will be set up by Cleta Mitchell, a well-known Republican campaign finance lawyer and partner at the law firm Foley & Lardner. D-Day will include a 501(c)(4) arm that can solicit undisclosed donations and a separate PAC registered with the Federal Elections Commission.

O’Keefe and Thomas did not respond to requests for comment. Mitchell, in response to an inquiry from The Intercept, wrote that it was not her “role to answer any questions on this. Sorry.” Asked who to contact about the new venture, Mitchell wrote, “No one. None of your business.”

Thomas and Mitchell announced the suite of projects at an invite-only gathering hosted by the Council for National Policy in McLean, Virginia, in mid-May. The CNP meetings are influential and secretive gatherings designed to advance a hard-edged view of social and political causes.

At the CNP event, Thomas issued a dark warning about a “cultural revolution,” a confrontation conservatives might lose unless they “help explain to America the fight against America.”

Thomas issued a dark warning about a “cultural revolution” — a confrontation conservatives might lose unless they “help explain to America the fight against America.”

The sweeping presentation covered a range of topics, including the “mob tactics” used by leftists against those wearing “Make America Great Again” hats and how the “hard left” has co-opted “the corporate community” to support a ban on housing and employment discrimination against LGBTQ people.

The campaign entities and O’Keefe project are among several initiatives to be “incubated” by Thomas’s Crowdsourcers initiative. The presentation lists efforts to “Build Robust Infrastructure,” led by Bill Meierling, chief marketing officer of the American Legislative Exchange Council, and “Brand the Left: You’ve Been Lied To!” led by direct-mail consultant Richard Viguerie.

Most of all, Thomas said, conservatives must study successful left-wing groups and emulate their tactics. To drive home this point, Thomas pointed to Chinese military general Sun Tzu, presenting the crowd with a slide featuring a quote that began: “If you know the enemy and know yourself, you need not fear the result of a hundred battles.”

The colorful presentation provided a snapshot into the latest of a series of right-leaning movement ventures by Thomas, who has worked in GOP advocacy since the late 1980s. She has served as an aide to a Republican lawmaker and then as a lobbyist with the U.S. Chamber of Commerce. A slide from a presentation given by Ginni Thomas explaining Crowdsourcers.

In 2009, Thomas founded a grassroots organization called Liberty Central, which she proclaimed would “be bigger than the tea party.” The group raised $1.5 million from anonymous donors and paid Thomas a $120,000 salary, but only lasted a few years before disbanding.

In 2011, Clarence Thomas acknowledged that he had failed to disclose in his judicial ethics forms his wife’s additional income, relating to her work for the Heritage Foundation and Hillsdale College.

More recently, Ginni Thomas has been involved in an ad-hoc coalition known as “Groundswell,” touted as a plan to wage a “30-front war” on left-wing activists and the GOP establishment.

In January, Thomas met with Donald Trump in the Roosevelt Room of the White House, according to a report in the New York Times. The story claimed that Thomas used the hourlong meeting to sharply criticize the president for not doing more to place Trump supporters in administration positions.

In the past, critics have raised issues with Thomas, arguing that her political activity represents a conflict of interest for her husband on issues ranging from health care to campaign finance. There is no law barring spouses of judges from engaging in politics at any level, and there is no suggestion that — beyond the justice’s previous failure to report his wife’s outside income — any formal rules of the court have been broken.

Still, the increasingly combative and partisan nature of Thomas’s activism will reflect on public perception of the Supreme Court and her husband’s archconservative rulings.

The Washington Post noted that, in recent years, Thomas has made her Facebook page a forum for increasingly conspiratorial and inflammatory content. She has linked to memes alleging that Democrats stole the 2018 midterm elections and shared an image post, now deleted, claiming that Parkland, Florida, students advocating for gun control were “dangerous to the survival of our nation.”

Earlier this month, Thomas posted a meme demanding that Congress should turn away from undermining Trump and focus on “real problems” such as a the “rise of infanticide.”

Her private presentations to conservatives take a similar tone.

Last October, the Council on National Policy held another gathering in Charlotte, North Carolina, at which Thomas gave a presentation on the state of the election and her views of the challenges ahead.

“The hard left,” Thomas said at the time, “is in control of the Democrat Party.” She continued, “They’re pushing and pulling at the party. And they’re also controlling the media and corporations and Hollywood and education. And we’re in the minority in our country.”

Thomas warned that the “fascist left” had encouraged violence over the hearings to confirm Judge Brett Kavanaugh to the Supreme Court and would continue waging a cultural war against conservatives.

That war included, she said, a push to use “rainbow flags” to send “powerful, subtle messages” against conservatives. She also cited the left-wing shooter who arrived at the congressional baseball game in 2017 to target GOP lawmakers. The members of Congress targeted were lucky that Rep. Steve Scalise, R-La., had security with him, Thomas said.

“We all have guns and concealed carry,” Thomas said, “to handle what’s coming.”

Update: June 5, 2019
This story has been updated to include a slide from Ginni Thomas’s presentation explaining the structure of her new Crowdsourcers organization.