Hospitals Already Had a Nurse Staffing Crisis. Then Covid-19 Came Along.

Studies have reported a link between staffing shortages and higher rates of hospital-acquired infections. 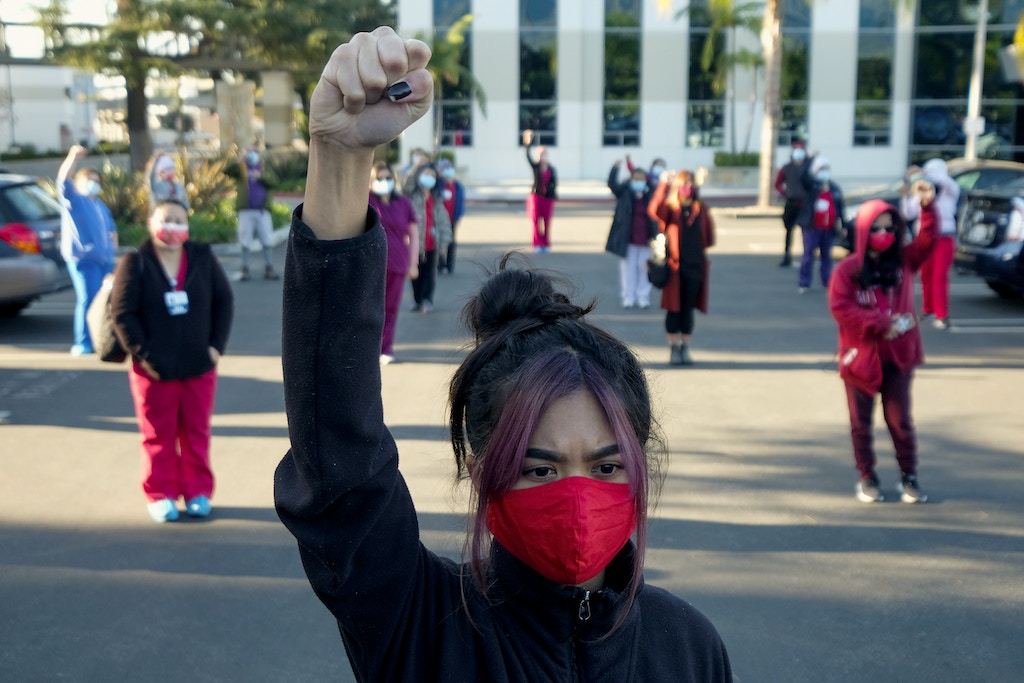 A nurse takes part in a socially distant silent event to protest Methodist Hospital of Southern California’s use of a state waiver to allegedly “circumvent RN-to-patient safe staffing standards,” in Arcadia, Calif., on Jan. 2, 2021.

When Kimberly Yarck went to work nearly nine years ago as a nurse on the medical-surgical floor at Logan Health Medical Center in Kalispell, Montana, she found herself part of a finely tuned operation. Her floor followed a model wherein a team of one registered nurse, or RN, and one certified nursing assistant, or CNA, were assigned five patients. “That was perfect,” Yarck said. “Great communication and good teamwork.”

But in the intervening years, management restructuring as well as subsequent failure to recruit and retain nurses and nurse aides left the staff depleted, and as a result, nurses were forced to take on more patients. Now, the same RN/CNA duo is taking as many as eight people into their care at once, an uptick in responsibility that, according to Yarck, has impacted her ability to tend to bedridden patients. She’s now seeing more patients develop bed sores and other hospital-related ailments. “We try to prevent them, but if you don’t have enough people on hand, it happens,” she said. Logan Health has above-average levels of hospital-acquired infections for four of the five infection types tracked by the Leapfrog insurance analysis group. Logan Health did not respond to a request for comment.

There’s plenty of research to support Yarck’s warnings about hospital staffing: Multiple studies have reported a link between short nurse staffing and higher rates of hospital-acquired infections. A 2020 study on sepsis, published in the American Journal of Infection Control, found that each “additional patient per nurse is associated with 12% higher odds of in-hospital mortality, 7% higher odds of 60-day mortality, 7% higher odds of 60-day readmission.” Hospital-acquired infections kill 98,000 Americans annually; bed sores in particular pose a threat, as they can lead to sepsis unless they are prevented and cared for with proper nursing.

Nurse staffing could become more scant unless hospitals take action to shore up their workforce. According to a 2018 survey by RNnetwork, a nurse staffing agency, 80 percent of nurses said there was a shortage in their facility. Many hospital executives claim there simply aren’t enough nurses, but Linda Aiken, a professor of nursing at the University of Pennsylvania, says that argument doesn’t hold water. “We’ve doubled the number of nurses graduating to over 160,000 nurses every year, compared to 70,000 15 years ago,” she said. “Why didn’t that make a difference? The fact is that these hospitals are not employing enough nurses. They’re not offering employment opportunities that are satisfactory to nurses.” Indeed, many nurses contend that wages aren’t high enough, the work is made more dangerous by a depleted staff, and management doesn’t listen to their concerns.

“Nurses really tell the truth,” said Aiken. “They’re not cooking stuff up, nor are they saying stuff because they want more money. They are people who are really trying to provide good care in a desperate situation where they are not getting good help. The solution is to hire more nurses.”

The staffing shortage has been made even more apparent during the Covid-19 pandemic which, despite $175 federal billion in aid to U.S. hospitals (including $30 million in grants to Logan Health), has left nurses and hospital workers feeling more overworked than ever before. Given that hospital stays have skyrocketed during the pandemic, the risks of short-staffing — and in turn, hospital-acquired infections — have become even more pertinent.

“The rates of hospital acquired infections are way too high, even well before Covid and the deaths are really unacceptable,” said Aiken. Speaking about sepsis, Aiken added, “We know scientifically that you have to recognize sepsis very fast. It’s a clinical cascade that has to happen very rapidly. It requires sophisticated nursing.”

In early June, Yarck and 650 of her coworkers — all of them members of the union SEIU Healthcare 1199NW — went on a five-day strike against Logan Health to demand an increase in safe nurse staffing at the hospital. “I just want to get us back to a model of a nurse and a CNA and five patients,” said Yarck. “That would cut down on so many problems.”

Staffing is a hot-button issue for health care unions around the country. Last year, 2,000 nurses in Asheville, North Carolina, joined National Nurses United; another 1,800 nurses from the Maine Medical Center in Portland joined NNU in May. Both groups cited short staffing as one of their primary issues, and both hospitals have seen unusually high rates of infection: The Asheville hospital has above-average rates of infections for C. diff, a bacteria that causes colitis, and hospital-acquired infections; the Portland hospital has above-average rates of urinary tract infections; and both hospitals have above average rates of surgical site infections after colon surgery, according to Leapfrog.

Only California’s strict nurse-to-patient ratio law ensures that there are enough nurses on hand to implement complex infection protocols needed before a patient’s condition substantially deteriorates. Although California Gov. Gavin Newsom, a Democrat, used the pandemic as a pretext to temporarily gut the regulations, they were reimplemented in February.

Health care unions around the country have pushed for such nurse-to-patient ratio legislation to address the negative clinical outcomes of short staffing like high rates of hospital-acquired infections. But uniformly, powerful hospital associations have risen up to aggressively fight them. In 2018, a proposed ballot initiative in Massachusetts to implement nurse-to-patient ratios was defeated after the state’s hospital association spent $24.7 million against it. At the time, the Massachusetts Health and Hospital Association said the proposed initiative would incur “outrageous costs … without any benefit to patient safety.” (Full disclosure: I work as a researcher for a nurses and health care union in Pennsylvania that is allied with the Massachusetts Nurses Association, which sponsored the ballot initiative.)

Nurse-to-patient ratio legislation aside, there are still steps the Biden administration can take to deal with the problem of short nurse staffing. Aiken pointed out that on the Centers for Medicare and Medicaid Services’ Care Compare website, there is no centralized reporting on nurse staffing, so prospective patients have no idea whether or not the nurses at the hospital they are looking at are overworked. CMS could compel hospitals to report those numbers, opening up transparency to the public. “There’s not a single thing on Hospital Compare on nurse staffing. Why hasn’t CMS taken such a simple action so far?” asked Aiken. “The lobby against any regulation on nurse staffing is so powerful.” The hospital industry spent $436 million on campaign contributions and spending in 2020, according to the National Institute on Money in Politics.

In the meantime, the Centers for Medicaid and Medicare Services has begun to penalize Logan Health’s main hospital, Kalispell Regional Medical Center, for hospital-acquired conditions, including infections. CMS similarly penalized 773 other hospitals across the country. And the Logan nurses continue to bargain after their strike, holding out for staffing changes that they say would improve patient care. “We’re so detached from the decisions of the administration and they directly affect our work life,” said Yarck. “All we’re asking for is a seat at the table.”