Jair Bolsonaro’s Pro-Coup Rally: September 7 Is Shaping Up to Be Brazil’s January 6

With his reelection prospects dimming, Bolsonaro’s supporters are ramping up their version of the pro-Trump rally that led to the Capitol riot. Supporters of Brazil’s far-right President Jair Bolsonaro are organizing online to take to the streets on Tuesday and begin the overthrow of the country’s democratic institutions. “It’s all or nothing now,” said an unnamed narrator in a video shared in pro-Bolsonaro online messaging groups. “Take the streets this September 7 or we’ll be slaves.” Another video called for “patriots” to donate money and participate to “begin a general cleansing process in Brazil.”

It’s no coincidence that the first decree under Brazil’s U.S.-backed military dictatorship was called “Operation Cleanse.” The diktat, issued in 1964, as the generals took power, initiated a witch hunt to remove leftists and other political opponents from positions of power and began two decades of brutal political repression that included censorship, mass arrests, torture, rape, and assassinations.

Brazil’s far right is calling back to that history, without the wink-and-nod, to restore their order at the expense of democracy. The hard right believes that, since the military relinquished control in 1985, Brazil has deteriorated. A rejuvenated “communism,” they say, must again be purged, resisted, and battled back by any means possible.

In online groups for organizing the September 7 rally, the zeal for undoing democratic institutions was on full display. Pro-Bolsonaro activists, for instance, offered suggestions for banners: “Remove all the Supreme Court ministers,” one read, while another said, “Activate the Armed Forces.” If things line up, Bolsonaro will gaze on these slogans in person: He will reportedly speak at the rallies in São Paulo, Brazil’s largest city, and Brasília, the capital. Other smaller events will occur across the country as well.

The posturing of pro-Bolsonaro figures ahead of the September 7 rally feels not unlike the run-up to the January 6 Capitol riot in Washington, D.C., which aimed to overturn the electoral defeat of President Donald Trump on the spurious grounds of mass electoral fraud. There’s a president with waning popularity, a fervent, gun-loving minority that sees defeat as an impossibility, and a pulsing desperation making them ready to take matters into their own hands.

Whether Bolsonaro will manage to topple Brazilian democracy and keep himself in power remains to be seen, but September 7 is already shaping up to be a bold step in that direction.

Whether Bolsonaro and his supporters will manage to topple Brazilian democracy and keep him in power remains to be seen, but September 7 is already shaping up to be a bold step in that direction.

While large nationwide protests and pro-coup messaging in Brazil are hardly new, Bolsonaro’s declining political prospects and escalating attacks against the Supreme Court suggest that September 7 could portend a more serious threat to Brazil’s 35-year-old democracy.

Rep. Eduardo Bolsonaro, the president’s son and a former Federal Police officer, has served as an unofficial ambassador to Trump World in recent years and was in Washington, D.C.. meetings with Trump’s inner circle before and after the Capitol riot. Eduardo is also close with Trump’s former strategist Steve Bannon, who is under investigation by Brazil’s Federal Police for his suspected role in attacks on the country’s electoral system. The two appear to have been studying the American case to learn from past mistakes. One example of this process may be that, in Brazil, they’re making their move long before the election itself. 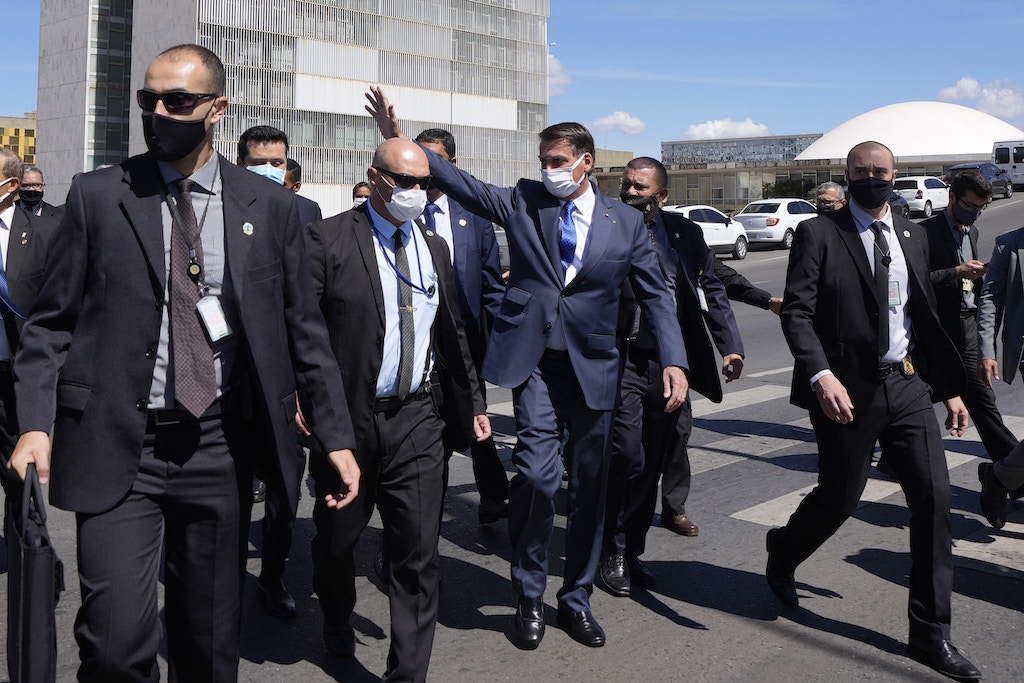 Brazilian President Jair Bolsonaro is surrounded by security agents as he waves to supporters while leaving the Chamber of Deputies headquarters in Brasília, Brazil, on Aug. 9, 2021.

This is the standard tactic of right-wing coups for decades, as outlined in Vincent Bevins’ book “The Jakarta Method”: Invent a left-wing coup plot and launch a “countercoup” to prevent it. We didn’t have a choice, they’d argue: Extreme measures were required to save the country.

Bolsonaro is following a similar logic, replete with the same lies about electoral fraud. He has claimed publicly that the event is a “pro-democracy” rally focused primarily on “freedom of speech,” echoing tropes used by far-right extremists worldwide when they are on the defensive, but that rings hollow once you examine their true authoritarian platform. Like Trump, Bolsonaro says fraud is rife — he’s repeatedly claimed, without evidence, that even his landslide 2018 win was amid a fraudulent election — and that if Brazil does not change its voting system for 2022, he will not accept the results. And there are whiffs of Trump’s complaints about the deep state: Bolsonaro has argued that his movement is being persecuted by the Supreme Court.

Despite all the democracy talk, however, coup-mongering remains at the top of Bolsonaro’s agenda. “An opportunity for the Brazilian people has never been so important — or will be so important — as this coming September 7,” he told a crowd last week. “Many want me to take certain measures. I believe that we are going to change the destiny of Brazil.” Eventually, he added a meager reference to the constitution — a constitution that, written in the wake of the dictatorship, many of Bolsonaro’s diehard supporters view as a communist document that must be replaced.

“Things will only change, unfortunately, when, one day, we start a civil war here and do the work that the military regime did not do.”

In a 1999 TV interview, Bolsonaro, a member of Congress at the time, notoriously called for a civil war — with greater bloodletting than even the dictatorship era. “Through the vote, you will not change anything in this country, nothing, absolutely nothing! Things will only change, unfortunately, when, one day, we start a civil war here and do the work that the military regime did not do,” he said, going on to explicitly call for the killing of tens of thousands. “If some innocent people are going to die, fine. In any war, innocents die.”

Like Trump, Bolsonaro’s approach to the election is borne out of a precarious political situation. Just as Trump’s was, Bolsonaro’s election campaign is beset by investigations into improprieties and declining popularity.

At least five federal investigations are closing in on Bolsonaro and his family, not to mention his political associates. A steady trickle of his allies have already been arrested for anti-democratic incitement, corruption, and more. Public opinion polls show that only about 24 percent of Brazilians approve of Bolsonaro, but that hardcore base appears to be unshakeable. Evangelicals, police, wealthy farmers, and truckers are among the core constituencies that are mobilizing their bases to attend the September 7 rally, even as some financial elites have begun to turn their backs on the president.

The desperation might suggest the September 7 would-be preemptive coup is more bark than bite. 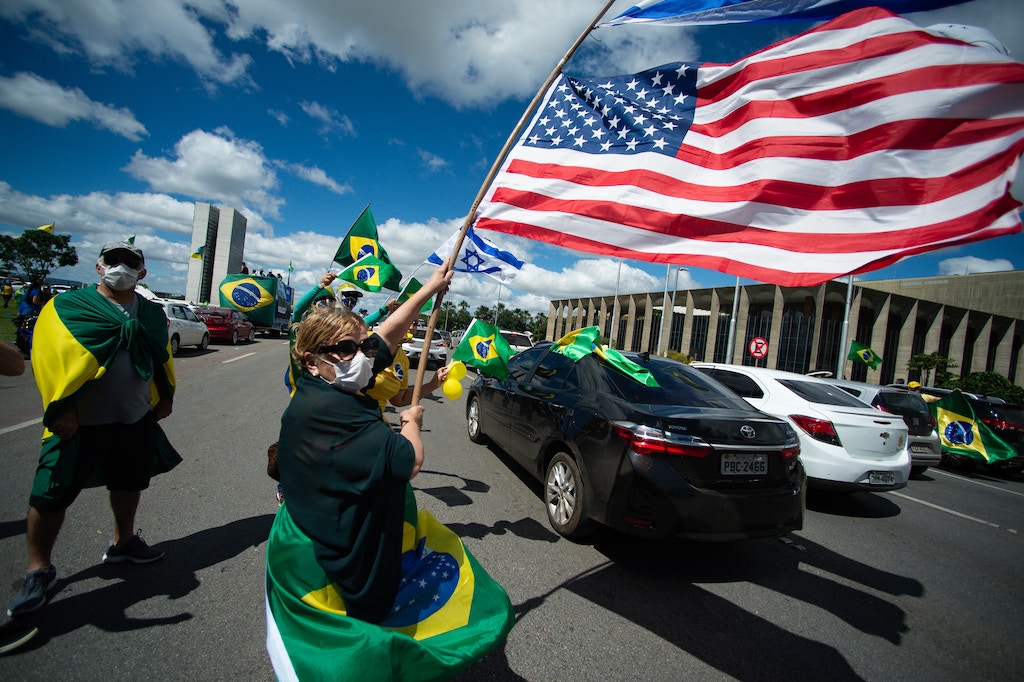 People participate in a motorcade and demonstration in favor Brazilian President Jair Bolsonaro in front the Brazilian Congress, on April 26, 2020 in Brasília, Brazil.

Could Brazil’s September 7 movement succeed like the military coup in 1964, or will it fail like Trump’s attack on the Capitol? Important structural elements suggest the latter. In 1964, the generals, crucially, had the unified weight of the U.S. government, Brazil’s economic elite, and the media on their side. Popular opposition was scattered and weak. Now, not so much.

The U.S. has never been shy about supporting undemocratic right-wing thugs in Latin America, but the Biden administration has also been no friend of Bolsonaro, who openly supported Trump’s reelection. During an August visit to Brasília, U.S. national security adviser Jake Sullivan reportedly told Bolsonaro to stop attempting to undermine the election process. But the U.S. has its own pragmatic interests to pursue in Brazil, namely, stemming China’s increasing influence, and a pro-U.S. regime that idolizes American culture can be mighty useful.

The economic elite, who largely backed Bolsonaro on the hopes that he would push through a raft of neoliberal economic reforms, have slowly begun to begrudgingly jump off the bandwagon.

The economic elite, who largely backed Bolsonaro on the hopes that he would push through a raft of neoliberal economic reforms, have slowly begun to begrudgingly jump off the bandwagon. The timing suggests that they weren’t turned off by the tidal wave of corruption revelations, the bigoted and genocidal policies, or the intentional spread of Covid-19 that has so far killed more than half a million Brazilians. Instead, the deciding factor appears to be economic self-interest: Brazil is doing worse than other nations economically under Bolsonaro, his government has not delivered on many of its promises, and the government incompetence and aggressive style has deterred foreign investors.

While many of Brazil’s oligarchs recently made public statements about defending democracy, it’s hard to believe that they would reject military rule if they believed it would make them wealthier and more powerful. Despite the recent remarks, the elite families of Brazil have a spotty record on supporting democracy. They eagerly supported undemocratic measures to thwart center-left politicians in 2016 and 2018 and profited greatly off the anti-worker repression of the 1964 coup.

And, of course, a not-insignificant chunk of the economic elite are diehard Bolsonaro supporters themselves, namely much of the agribusiness, mining, and timber sectors. These industries rely on Bolsonaro-approved land theft, Amazon destruction, wage slavery, and lax environmental enforcement. Big agribusiness lobbies are some of the principal financiers of the September 7 movement.

Brazil’s major journalistic institutions follow a similar logic. Many outlets have been obsequious to Bolsonaro’s agenda and rewarded for their efforts with heaps of government ad buys. And as in the Trump era, other major corporate media institutions have hissed at Bolsonaro’s boorish ways and spoken out “in defense of democracy” against attempts to discredit their industry as “fake news.” And yet Bolsonaro’s regressive economic agenda has been roundly supported by the mainstream press. These powerful outlets are unlikely to sign on for a coup led by a man who paints them as an enemy but might quickly change their tune if it were to succeed.

The military remains something of an enigma and is the key player in determining how far all of this coup talk will go. The generals have a clear ideological affinity for Bolsonaro’s vision and have been rewarded with great power in his administration, even if some have personal misgivings about the man himself. These are, however, also cautious, guarded men, eager to preserve their lavish benefits packages and plum positions. The president enjoys wide support among the military rank-and-file, though, as well as among the militarized police forces, a fact that has troubled opponents.

As for Bolsonaro himself, the message is clear: “I have three alternatives for my future: prison, death, or victory,” Bolsonaro said last week at an event with evangelical leaders. “You can be sure the first alternative doesn’t exist. I’m doing the right thing and I owe nothing to anyone. Wherever the people have been, I’ve been.” There is no subtlety here: He is saying that he will not accept impeachment or democratic defeat at the ballot box and is willing to die trying to stay in power.