Donald Trump threatened to jail Hillary Clinton if he becomes president. In the meantime, he looked like he wanted to hit her. 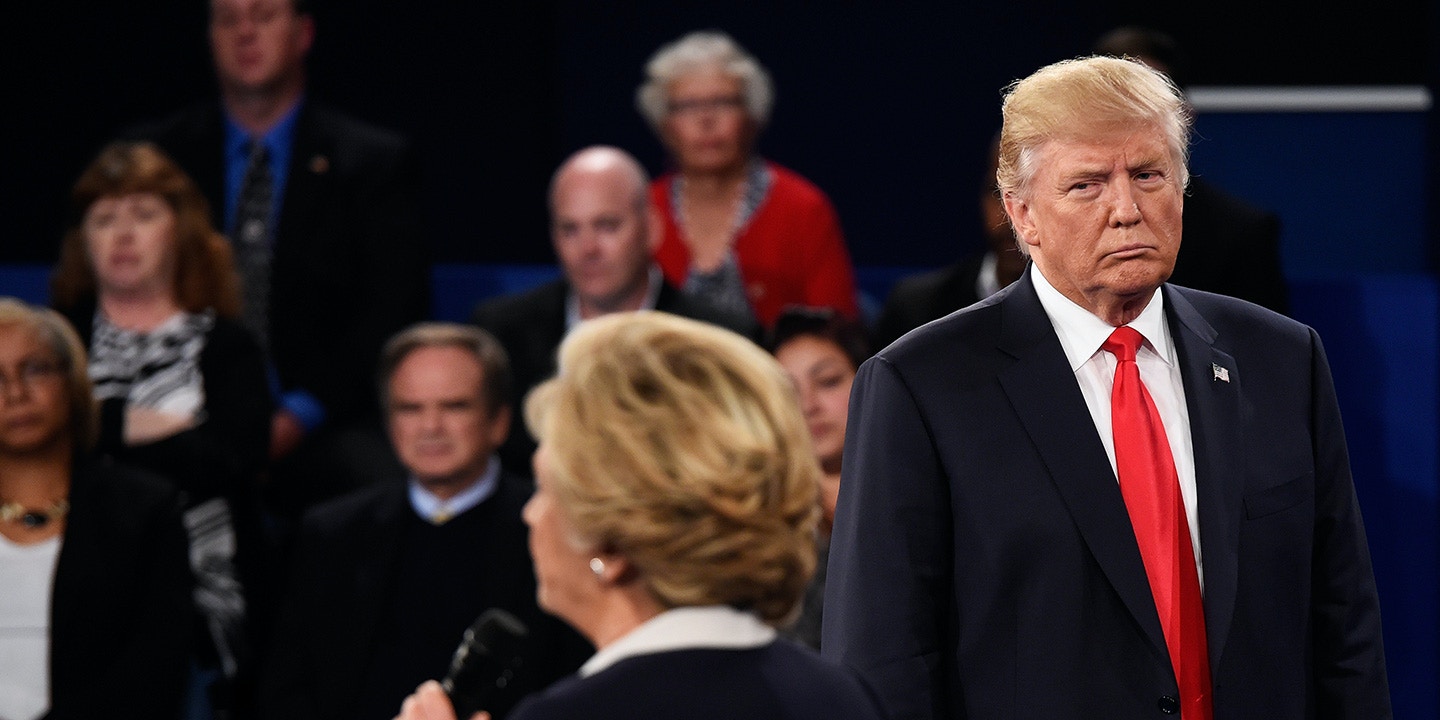 In a presidential debate like no other, Donald Trump threatened to jail Hillary Clinton if he becomes president. In the meantime, with his flailing, hate-filled campaign self-destructing around him, he looked like he wanted to hit her.

The biggest thing he had going for him on Sunday night, besides his diehard fans, was a corporate media whose members praised his performance, quite possibly because they still want this to look like a real contest so people will keep watching them and advertisers will keep paying.

Reeling from a devastating video that recorded him effectively confessing to serial sexual assault, Trump attacked Clinton instead, trotting out alleged victims of her husband Bill Clinton. Marking the death of irony, he said Hillary Clinton should be ashamed of herself.

The Intercept’s staff live-blogged the debate, trying desperately to focus on any significant issues that matter to ordinary Americans and the rest of the world, and we identified a few.

Foremost among them was Trump’s frank acknowledgement that he totally disagrees with his running mate, Mike Pence, about how to respond to Syrian and Russian government atrocities in Syria. Pence last week declared his support for “immediately” establishing a safe zone in Syria for civilians fleeing violence. Trump declared his opposition to such a move, instead praising the Syrian, Russian, and Iranian governments for “killing ISIS.” When the mostly excellent moderator Martha Raddatz asked him to explain such an astonishing discrepancy, Trump replied, “He and I haven’t spoken and I disagree.”

Clinton, meanwhile, contradicted herself rather than her running mate, saying she supports creating “safe zones” in Syria but is against sending in any U.S. ground troops. You can’t have it both ways.

Clinton also effectively confirmed the authenticity of the presumably hacked speech excerpts, released by WikiLeaks last week, that showed her speaking more frankly than she ever does in public about her pro-corporate agenda with the groups that paid her millions in speaking fees. She said one passage was taken out of context — insisting that she was paraphrasing Abraham Lincoln, of all people — thereby making it even more incumbent upon her to release the full transcripts herself.

Our blog also featured what were effectively dueling post-mortems of Trump’s campaign. Jeremy Scahill despaired that Trump “has empowered fascists, racists, and bigots. He did not create them, but he has legitimized them by becoming the nominee and openly expressing their heinous, hateful beliefs.” (Clinton, meanwhile, “represents more of the same bipartisan warmongering.”) Zaid Jilani countered that Trump doesn’t leave behind any viable political movement, because his campaign ultimately had less to do with politics than with “demonstrating how easy it is to capture the narratives on television without really anything of substance to say.” Of course, they can both be right, and probably are.