Donald Trump managed to top even himself with the shocking suggestion that he may not accept the election results if he loses. 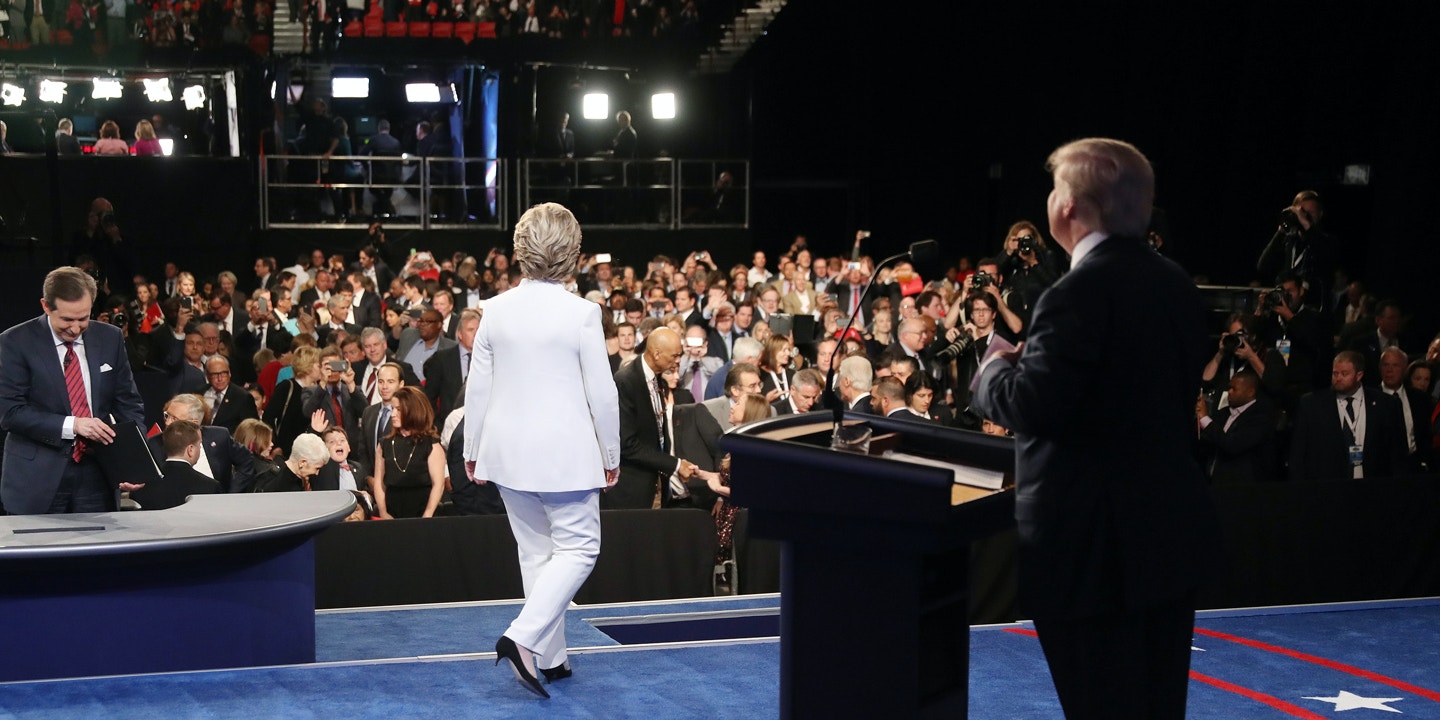 The third and final presidential debate was what we have come to expect in head-to-head confrontations between Hillary Clinton and Donald Trump: 90 minutes full of vicious insults, dark accusations of sexual misconduct and allegiance to foreign powers, and attempts by both candidates to steer policy questions back to mudslinging.

While this debate showcased a slightly more subdued Trump for the first 30 minutes, the reality television star then pivoted back to his freewheeling, abrasive style. He repeatedly interrupted Clinton, calling her a liar and a “nasty woman,” and managed to top even himself with the shocking suggestion that he may not accept the election results if he loses. “I will keep you in suspense, okay?”

Clinton used the beginning of the debate to channel some core progressive values, declaring during the first question about Supreme Court justices that her choice would uphold rights for marginalized groups and take aim at the Citizens United decision. Then, while she made passing references to expanding the social safety net and adopting Bernie Sanders’s ideas on higher education, she also emphasized her dedication to reducing the national debt. And later still, she tacked right, reiterating her support for a no-fly zone in Syria, a policy that would by definition entail potentially shooting down Syrian and Russian warplanes and sparking a dangerous escalation of the war.

By most accounts, Fox News’s Chris Wallace kept the debate grounded, deftly steering from one topic to the next, and he at times pushed back on obvious falsehoods repeated by Trump, including his refusal to acknowledge that his foundation had used charity funds to settle Trump’s legal bills.

But his questions were from a reliably right-of-center perspective. He demanded answers on reducing the national debt and the importance of keeping U.S. troops in Iraq “to make sure that ISIS does not come back or is even replaced by something even worse?” Out of all the Wikileaks revelations, Wallace avoided pertinent questions about financial regulations or fracking, and instead focused on the disclosure of a paid speech in which Clinton hoped for open borders within the hemisphere.

Economist Justin Wolfer aptly observed: “Wallace did a good job managing this debate, but many of his questions (to both) have been: Why aren’t you promising Republican orthodoxy?”

The Intercept’s team covered the debate on our liveblog, and we couldn’t help thinking about the much bigger topics that could have been tackled, including climate change and racial justice.

The debate was largely a parade of opposition research and put-downs, with little in-depth discussion of the problems the country faces.

But it did have its moments of unintended comic relief, as when Trump seemed to confuse a c-section procedure with an abortion, described his meeting with “high Indian representatives,” and tried to talk about military strategy.

See below for what we posted, categorized by topic. Did the debate go as you expected? What did we miss? Tell us in the comments.

Confidence in the election

Top photo: Republican nominee Donald Trump looks on as Democratic nominee Hillary Clinton speaks during the final presidential debate at the Thomas and Mack Center on the campus of the University of Las Vegas in Nevada.