When faced with the heart-wrenching accounts of children systematically separated from their families at the U.S.-Mexico border, Trump administration officials routinely relied on the same defense: that the enforcement of their so-called zero tolerance policy did not aim to break up families. If those separations did happen, they often said, it was no different than what happens to parents who are arrested in the criminal justice system every day.

The aim was to distance the administration from allegations that it was using the torturous experience of family separation itself as a means to deter migrants and asylum-seekers from coming to the United States. Advocates on the border knew better than to believe the dubious justifications of an administration that came to power vowing to punish immigrants, one that was packed with hard-line nativists and nationalists. Though federal courts had repeatedly ruled that it is illegal for the government to change its immigration detention policies in order to deter migration, it was evident from the very beginning of the Trump presidency that that was exactly what the administration was planning to do.

In April 2017, Trump’s first attorney general, Jeff Sessions, and his first secretary of homeland security, John Kelly, took a tour of the U.S.-Mexico border, where they described a plan to begin prosecuting parents who paid to have their children smuggled across the international divide. The tour followed a memo Sessions had sent to U.S. attorneys’ offices just a week earlier, in which he called for ramped up prosecutions along the border. By the end of the summer, federal law enforcement was deep into a family separation pilot program in El Paso, Texas — a program marred with problems — that then became the template for the borderwide family separation policy the following spring. The anguish caused by the policy was plain to see, and a memo released under the Freedom of Information Act soon made it clear that deterrence lay at the heart of the separations. Those truths were evident to the families impacted by the program, lawyers advocating on their behalf, and journalists reporting on the crisis; this week, they were verified in a sweeping Justice Department review.

On Thursday, the Justice Department’s Office of the Inspector General released a 93-page review of the zero tolerance policy, declaring in clear terms that the nation’s top law enforcement official was acutely aware that the policy would result in the separation of families and that he and his underlings implemented the program with no regard for the people it would impact.

“Then Attorney General Sessions was aware that full implementation of the zero tolerance policy would result in criminal referrals by the U.S. Department of Homeland Security (DHS) of adults who entered the country illegally with children and that the prosecution of these family unit adults would result in children being separated from families,” the review said, adding that the attorney general’s office “was a driving force in DHS’s decision to begin referring family unit adults for prosecution.”

With just six days remaining in the Trump presidency, Democrats seized on the findings as further evidence of the outgoing administration’s limitless capacity for cruelty. Rep. Bennie G. Thompson, D-Miss., the chair of the House Committee on Homeland Security, said in a statement that the review “confirms what we already knew: that the Trump Administration intended to separate families at the border. They knew the consequences and did it anyway.” Sen. Ron Wyden, D-Ore., added that the review showed that Sessions and his deputy attorney general, Rod Rosenstein, as well as the administration writ large, “willfully disregarded the lives of innocent children in their xenophobic crusade to criminalize migrant families. The trauma of thousands of migrant kids is on their hands. Everyone involved in this cruel and ill-conceived policy must be held accountable.”

Sen. Jeff Merkley, D-Ore, took it a step further, naming specific Trump administration officials in a statement to the press and calling for prosecutions. “It is crystal clear that Jeff Sessions, Stephen Miller, Chad Wolf, Kirstjen Nielsen and other senior Trump administration officials were not only fully aware that their policy would have traumatizing impacts on families, but also that their intention was to inflict that trauma as a means to deter people from coming to America in search of a better life,” Merkley said. “Further, it’s now confirmed that they committed perjury by lying to Congress about their intentions and actions in order to avoid accountability for their monstrous initiative.”

In 2019, after visiting a repurposed Walmart where the government was caging hundreds of immigrant children, Merkley called on the FBI to open a perjury investigation into Nielsen, who oversaw the homeland security component of zero tolerance as DHS secretary and repeatedly told the public that the government did not have a policy of family separation. The senator returned to that demand in the wake of Thursday’s report. “The architects should be investigated and prosecuted to the full extent of the law for any crimes connected with both the atrocities and the cover-up,” he said. “I am determined to work with the Biden administration to ensure that we turn that vision into a reality, and to hold the perpetrators of the Trump administration’s cruelty fully accountable.” 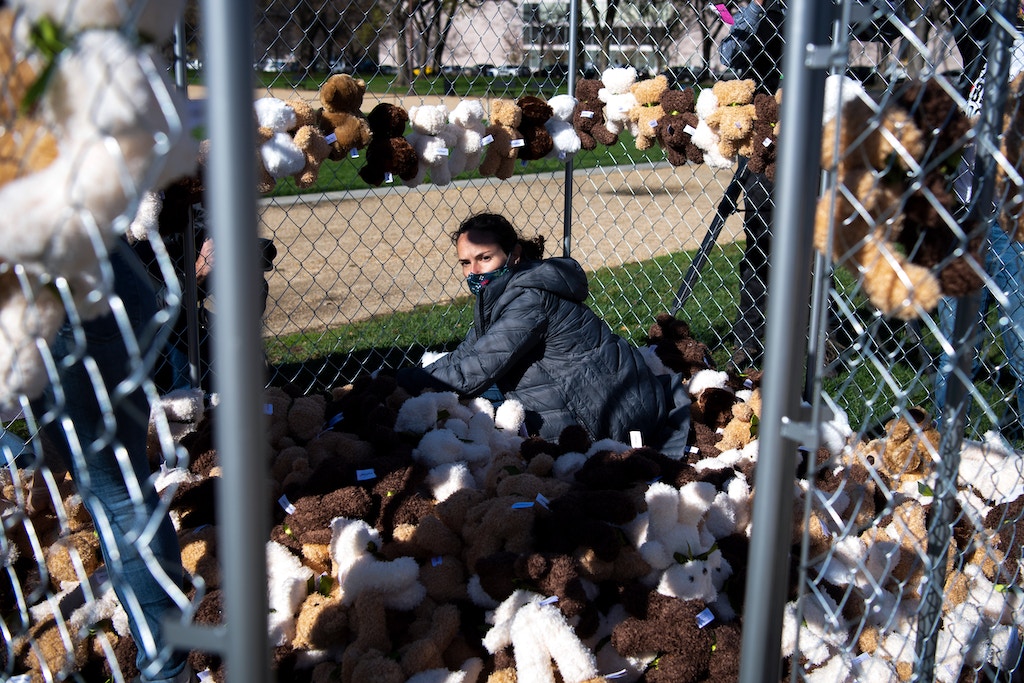 Lisa Watkins, a volunteer from Families Belong Together, places teddy bears inside a cage as part of a demonstration involving 600-plus teddy bears meant to represent the children still separated from their families as a result of U.S. immigration policy in Washington, D.C., on Nov. 16, 2020.

The thrust of Thursday’s review was already known. In October, the New York Times obtained a draft version of the report, in which Sessions was quoted telling prosecutors, “We need to take away children,” a month before Nielsen stated in a press briefing: “We do not have a policy of separating families at the border. Period.” The Times also described Rosenstein telling prosecutors that the age of children should not factor into decisions to prosecute their parents and break up their families.

It will take years to determine the full historical impact of zero tolerance. The Justice Department review noted that “more than 3,000 children” were separated under zero tolerance. That figure is in line with earlier accounts of the policy’s impact — as a DHS inspector general’s report in 2019 noted, “thousands” of more children may have been separated under the policy, but the true total is unknown due to careless record-keeping. Those separations included babies and toddlers, children who were blind, and families who had fled staggering violence to exercise their legal right to seek asylum in the U.S. Under the program, many parents were deported without their children. Some were separated for months on end. Child welfare experts said the effect on children amounted to torture. Many families remain separated to this day, and despite an executive order from Trump ostensibly ending the practice in June 2018, reports of ongoing separations continue to surface.

The incoming Biden administration has said that it will “immediately reverse the Trump Administration’s cruel and senseless policies that separate parents from their children at our border.” The incoming administration has also pledged to convene a task force to reunite families who are still separated, though it has not offered specific details on that initiative. The American Civil Liberties Union, which has an active lawsuit against the federal government over its family separation policy, called for more. “The barbaric family separation practice was immoral and illegal,” Lee Gelernt, the organization’s lead attorney in that litigation, said in a statement Thursday. “The incoming administration must reunite the separated families in the United States, but we cannot stop there. These families deserve citizenship, resources, care, and a commitment that family separation will never happen again.”

The inspector general’s review was silent on the morality of zero tolerance. Its recommendations instead focused on creating measures to improve communication and coordination between federal offices and agencies, which the report highlighted as one of the major failings in the implementation of the program. The review said that under Sessions, the Justice Department’s “expectations for how the family separation process would work significantly underestimated its complexities and demonstrated a deficient understanding of the legal requirements related to the care and custody of separated children.”

“We concluded that the Department’s single-minded focus on increasing immigration prosecutions came at the expense of careful and appropriate consideration of the impact of family unit prosecutions and child separations,” the review stated. “In addition, the increase in immigration prosecutions under the zero tolerance policy created operational, resource, and management challenges for the USMS, the USAOs, and the courts. DOJ officials were aware of many of these challenges prior to issuing the zero tolerance policy, but they did not attempt to address them until after the policy was issued.”

The report described Sessions’s relentless push to make zero tolerance the law of the land. As one of Trump’s first and most vocal supporters, the former Alabama senator brought some of his key aides with him to the Trump administration, including a former ICE attorney named Gene Hamilton and his communications lead Stephen Miller. With Hamilton bouncing between key positions at the Justice Department and the Department of Homeland Security, and Miller positioning himself as the president’s most trusted adviser, the cohort represented the hardest of the hard right on immigration politics in the U.S. They quickly put their knowledge of the system to work crafting the most punishing slate of policies possible — zero tolerance chief of among them.

Hamilton’s name comes up more than 140 times in the inspector general’s review, with the lifelong immigration hawk at times suggesting that he was merely following his boss’s orders. Miller is not mentioned once. Rosenstein’s name appears nearly 100 times in the review. In one instance, the former deputy attorney general is quoted celebrating the implementation of zero tolerance, saying, “I think it’s unlikely that ever in American history has there been more coordination about enforcement.”

In a statement released following the publication of the review on Thursday, Rosenstein, now a partner at a corporate law firm, expressed a new view of zero tolerance, saying, “It was a failed policy that never should have been proposed or implemented. I wish we all had done better.”