Bolsonaro Gave Brazil’s Army New Powers. The Generals Won’t Give Them Up Easily.

President Jair Bolsonaro’s 2022 electoral hopes have dimmed, but the military isn’t ready to give up its new riches and influence. “Leader! Leader!” chanted dozens of uniformed cadets on the palm-lined grounds of Agulhas Negras Military Academy, Brazil’s equivalent of West Point. The young men bunched together tightly to listen to a special visitor, Jair Bolsonaro, then a member of Congress. “We need to change Brazil, OK?” Bolsonaro told the crowd in 2014, just a month after the left-leaning Workers’ Party secured a fourth consecutive presidential election by a razor-thin margin. “Some will die along the way, but I am ready, in 2018, God willing, to try to move this country to the right.” Raucous applause ensued.

Bolsonaro, the far-right ideologue and a former army captain himself, made good on his pledge. In 2018, he was elected president with an outspoken retired general as his running mate.

It wasn’t always an obvious turn for the politician and Brazil’s most powerful institution. For many years, military leaders looked down on Bolsonaro, owing to his notorious acts of insubordination. By 2014, as the visit to Agulhas Negras demonstrates, things had clearly changed. The joint power play was already in motion, years before its fruition.

In office, Bolsonaro quickly appointed active-duty and reserve military officers to important civilian posts in his administration — thousands more than any democratically elected president in modern history — handing over responsibility for large swaths of the federal budget and control over the government. With Bolsonaro known to have little patience for the minutiae of his office — he works short hours — critics have consistently wondered who is really running Brazil: the generals or the president?

Not since the military dictatorship of 1964 to 1985 has the army enjoyed such power. The military has used Bolsonaro’s presidency as a vehicle to reclaim political power more subtly than in the past while also more effectively shielding itself from public resentment. Riding the far-right wave, 72 military and police candidates were elected to state and federal office in 2018. Two years later, 859 more won municipal contests.

Military officials ascended to top appointments in government. Some of them were revealed to be at the center of the Bolsonaro administration’s most brazen public corruption schemes and anti-democratic actions. So far, the military appointees have avoided prosecution, or even much scrutiny, perhaps thanks to not-so-veiled threats to Congress and members of the media.

This reality stands in sharp contrast to the public image that Bolsonaro and the military have long cultivated as correctives to the corruption of civilian politicians — despite ample evidence to the contrary. In this October’s elections, the shift in public image could become a liability for Bolsonaro and his military allies.

The military, for its part, is taking steps to ensure that its newfound power will persist no matter who wins the presidential race. Army cadets march during their graduation ceremony at the Agulhas Negras Military Academy in Resende, Brazil, on Dec. 1, 2018.

Bolsonaro will have showered the Brazilian Armed Forces and police with around $5 billion in new federal money by the end of his first term, according to an analysis by the Estadão newspaper — a considerable sum in a country with an annual discretionary budget limited to around $19 billion and for a president who promised to reduce spending. Defense received the highest discretionary funding allotment of any ministry in the 2021 and 2022 budgets.

While the military has flourished, deep cuts in federal spending have been felt in health, education, environment, science, culture, small-scale agriculture, food security, and anti-poverty programs. Yet in the last three years, the Armed Forces have been spared from the budget cuts, pension reforms, and wage freezes that have impacted Brazil’s civilian ministries and public workforce.

In the last three years, the Armed Forces have been spared from the budget cuts, pension reforms, and wage freezes that have impacted Brazil’s civilian ministries and public workforce.

Brazil spends more on its military than the next six Latin American countries combined but nonetheless is known for relying on antiquated equipment. That is because more than 83 percent of its budget goes to salaries and benefits, the majority of which pays for ample pensions and retirement benefits. Bolsonaro, who came into office promising dramatic austerity reforms, has cut social security benefits and public sector pensions, but the military has not been subject to the most severe measures. Military jobs have even seen pay raises.

The president has also pushed through benefits to foster goodwill among police and firefighting agencies, most of which are militarized forces, including giving significant raises to certain officers.

Bolsonaro has repeatedly backed, but failed to pass, a bill that would make it harder to prosecute members of the police and military for crimes such as homicide. Such prosecutions are already astoundingly rare in a country where officers kill more than 17 civilians per day, according to underreported official statistics, and where organized crime gangs led by security forces are a growing menace.

One of the more long-term initiatives in Bolsonaro’s pro-military agenda includes a push to incentivize state and local public schools to “militarize.” In exchange for federal funding and logistical support, the schools adopt a military-style curriculum and create a minimum number of jobs for police and military reservists, who also take over the school’s administration. Nationwide statistics are incomplete, but in the state of Paraná, the governor pledged to militarize around 10 percent of the more than 2,000 schools under his authority.

Thanks to Bolsonaro, some active-duty military officers and reservists, like those working in public schools, can use a loophole to inflate their paychecks. They can now receive their full salary or pension and simultaneously take home the full pay for other public sector work they perform even if the total pay exceeds constitutional limits for public servants, around $90,000 a year. By comparison, half of all Brazilian workers earn $2,775, the national minimum wage, or less annually.

Among the beneficiaries of this new regulation are the president, who gave himself a 6 percent raise, the vice president, and the military officials in Cabinet positions. Reserve Gen. Joaquim Silva e Luna, appointed by Bolsonaro to lead Petrobras, the state-run oil giant, earns nearly six times the limit, a fact that has even drawn criticism from within the ranks. 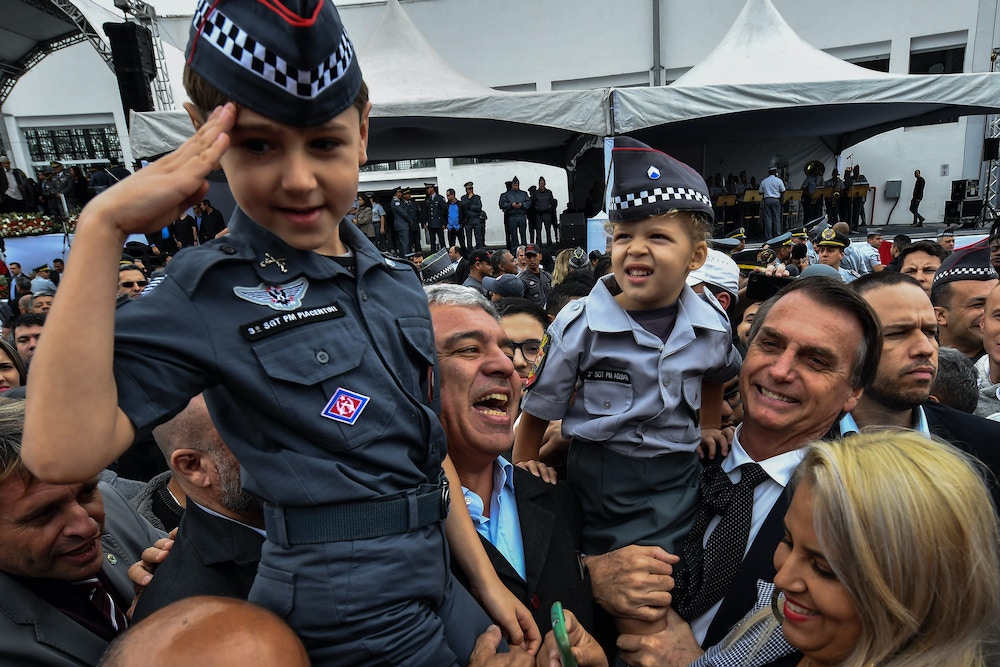 Brazilian presidential candidate for the Social Liberal Party (PSL) Jair Bolsonaro (R) holds a girl dressed in military uniform during the graduation ceremony of a military school in Sao Paulo, Brazil, on August 17, 2018.

That the military would have again waded deep into Brazilian politics solely for cash perks is improbable. “This is important, but it’s not everything,” Piero Leirner, an anthropology professor who has spent his career studying the military, told The Intercept. “The fact that strikes me the most is the restructuring of the state, with a change in legal provisions to produce a convergence of decisions towards military bodies.”

Ana Penido, a defense researcher at São Paulo State University, agrees. “Many analysts have been raising the possibility that something similar to the U.S. deep state is being set up in Brazil,” she said, “that framework where it doesn’t matter if Democrats or Republicans are in charge, some things always remain the same.”

“Many analysts have been raising the possibility that something similar to the U.S. deep state is being set up in Brazil.”

Both specialists point specifically to the Institutional Security Office, or GSI, a Cabinet-level body overseen by a military officer with responsibilities ranging from serving as the president’s chief national security adviser to directly overseeing ABIN, Brazil’s intelligence agency. The GSI was shut down by former President Dilma Rousseff in 2015, who transferred its responsibilities to civilian control, but it was immediately reestablished after her impeachment.

Bolsonaro put Gen. Augusto Heleno, a former aide to a hard-line general who attempted a palace coup during the dictatorship, in charge of the GSI. Heleno was part of an elite group of generals who advised Bolsonaro during the 2018 campaign and has remained an influential voice in the president’s inner circle through years of infighting and intrigue. In turn, he has broadened the GSI’s power considerably, expanding the agency into gathering more politicized and further-reaching intelligence and deploying ABIN spies to infiltrate important ministries.

“It is a more underground project being constructed during the Bolsonaro government that would have the ability to continue influencing power regardless of who wins the election,” said Penido.

As Bolsonaro’s political future dims, finding a way to hang on to power has become increasingly important for the military. “I don’t think they love Bolsonaro for who he is,” Penido said of the generals. “Their priority is their military ‘family,’ and they will join anyone who can prove they are competitive against Lula” — former President Luiz Inácio Lula da Silva, the Workers’ Party politician who is leading the early polls. If an alternative to Lula fails to emerge, Penido said, the military will continue to do what it can: “They are making the political calculations to try to remain in important positions of power or at least negotiate on the best possible terms.”

Leirner believes that the military has maintained so much access to power under Bolsonaro — controlling the intelligence apparatus and spreading its officials across the government — that its leadership may be able to seize the upper hand no matter who emerges in power. He said, “They have collected a vast amount of information that can compromise almost everyone in politics.”